This is the first time we’ve had a clear look at the EQS SUV with its production body and lights.

Mercedes-Benz is playing it safe by not only having an EQS sedan in its lineup, but also an SUV alternative set to be unveiled next year. We don’t yet know what it will be called, but we have recently had our best look at it yet courtesy of a new batch of photos from our spies.

This time they sent us what have to be the most revealing photos yet of the EQS SUV. They show it in its production body bearing production lights. It’s still mostly obscured by camouflage, but we are able to notice several design details.

The first striking part is just how big the greenhouse is in this vehicle. Just like the EQS sedan, the high rider has a longer greenhouse for its wheelbase than a comparable ICE model from the Mercedes lineup, but in the SUV’s case, the extra height makes the bigger greenhouse even more evident.

When it comes to the front lights, these appear to be production-ready, and their shape should be in-line with other tall EQ-badged models. We’re also pretty sure the vehicle has full-width light bars that connect the front and rear light clusters, but the camo on the prototype keeps them a secret for now - the rear light bar is somewhat visible in the Maybach EQS SUV teaser.

The inside will be very similar to that of the EQS sedan, complete with the same turbine-style air vents and the available Hyperscreen setup. Under the skin, the EQS SUV will share plenty with the sedan, including battery packs and powertrains.

This means it should have either 90 kWh or 108 kWh battery packs, charging at up to 200 kW, although range for vehicles equipped with the larger pack will be lower for the SUV. The EQS sedan has a claimed WLTP range of 478 miles (770 km) and we expect the SUV to be just over the 400 miles (643 km). 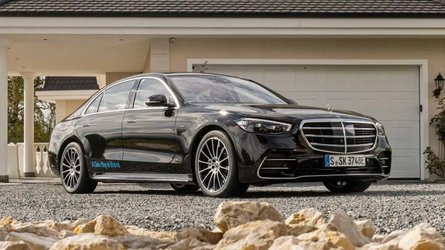 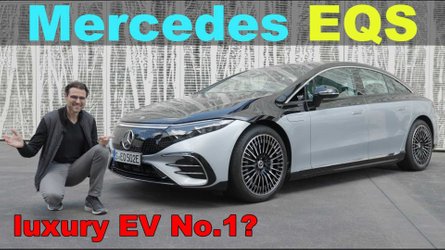 Autogefuhl’s Thomas Won Over By The Mercedes EQS 580
By: Andrei Nedelea
++
Got a tip for us? Email: tips@insideevs.com