It is related to the Baja Boot off-roader, but it’s a zero-emissions pickup powered by hydrogen.

Hydrogen fuel cells are still a controversial way to power an electric vehicles, but Scuderia Cameron Glickenhaus (SCG) is all in on it with its upcoming off-road-focused pickup truck. It’s been showing renderings and sketches of it for months, but now it has released the clearest and most revealing image so far.

The plan is to have a working prototype out this year, although we've yet to hear where the company will be sourcing its fuel cell from; it's unlikely that it will be developed in-house, even though that's what the company does with most of the components that go into its vehicles.

From the front, the fuel cell pickup looks a lot like the Baja Boot that SCG has already shown. In fact, the company calls it the Zero Emission Hydrogen Fuel Cell Boot Pickup Concept, a real mouthful, but it’s also an accurate description of the vehicle. 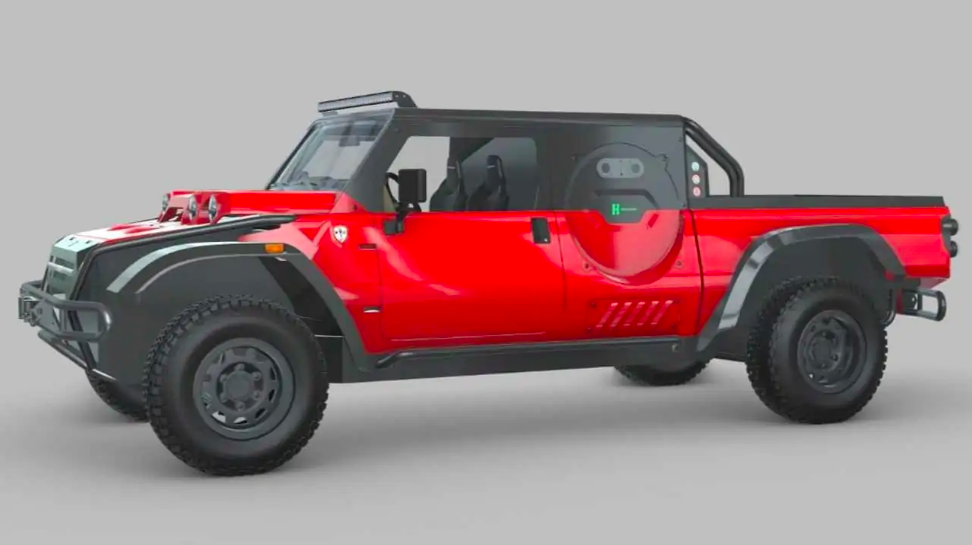 We don’t have any specs yet, but SCG wants the pickup to provide over 600 miles or 960 km of range on a single tank of hydrogen in this extended cab body. We don’t know what motor configuration it will have, but it will have to be motivated by at least two electric motors in order to make it all-wheel drive.

From a design standpoint, the front end does resemble the Baja Boot (although it's not identical), but it’s also different. It seems to have been designed to be functional rather than pretty and it has a winch that’s built into the front bumper. The greenhouse seems quite conventional, but it looks like it has space for a spare tire behind the front door. This also appears to be where you will fuel it with hydrogen.

The vehicle is clearly built to go to inaccessible places off-road, and aside from the winch, it also has quite high ground clearance, rock slider bars under the sills and flared plastic wheel arches designed not to impede upon wheel travel (which we expect this pickup’s suspension will provide).

Mercedes' Largest Truck Plant To Build Electric, Fuel-Cell Trucks
⠀ 1966 GM Electrovan Fuel Cell Vehicle Was Ahead Of Its Time
By: Andrei Nedelea
++
++
Got a tip for us? Email: tips@insideevs.com