It seems Tesla is pursuing legal action over the false brake failure claims in China.

In the US, Tesla doesn't have a PR department, and unless Elon Musk takes to Twitter to try to right false claims, they typically go unchecked and uncontested. However, that's clearly not the case in China.

One could say Tesla is essentially "starting fresh" in China, and to say things are different in China than in the US would be a supreme understatement. The media in the US is rampant with unsubstantiated stories so much so that Tesla has seemingly given up on targeting publications.

This is likely because the company knows that its fans and owners won't believe much of what they read, and the only folks regularly believing the false reports and spreading the misinformation are already openly anti-Tesla, and their base lives in somewhat of a vacuum on social media.

Moreover, if Tesla starts to push hard to go after publications making false and damaging claims, it would only make sense for others to go after hardcore Tesla fans who are also spreading misinformation that works in the company's favor.

At any rate, while we can only speculate about why Tesla is handling false claims differently in China, we can say that the situation has now escalated. According to a recent report shared by Teslarati based on a Weibo post, Tesla China is now taking legal action against the person who claimed his Model 3's brakes failed. You may remember, there were protests related to the unsubstantiated incident at an auto show and outside a Tesla store. 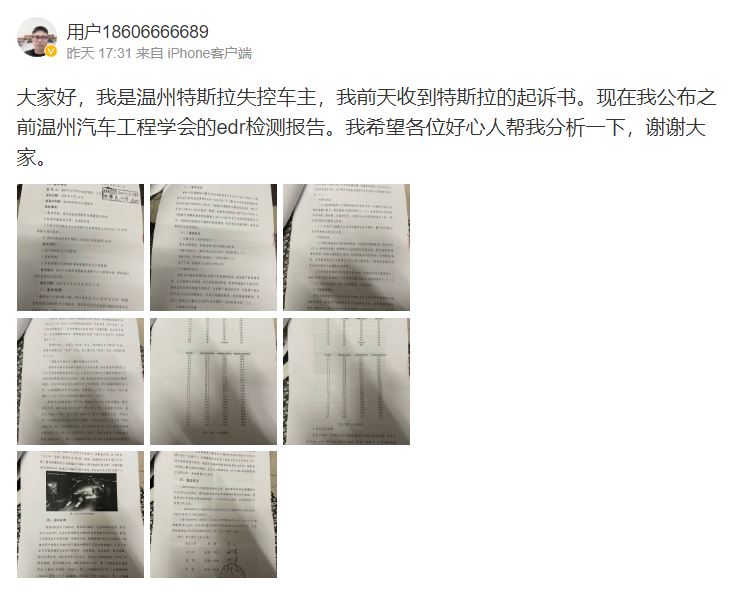 The Weibo post above was reportedly published by the Tesla owner the company is now targeting. According to Google Translate, the leading message reads:

"Hello everyone, I am the owner of Wenzhou Tesla out of control. I received Tesla's indictment the day before yesterday. Now I publish the previous edr test report of the Wenzhou Automotive Engineering Society. I hope all kind people will help me analyze it. Thank you."

Apparently, the data from Tesla proves that there was no brake failure, but rather, the driver hit the accelerator pedal instead of the brake pedal. Teslarati also shared a tweet related to the situation:

Covering Tesla news out of China is certainly a struggle. We don't have much information to go on here. However, we can assume that as this situation progresses, we'll learn more details from the media. The real challenge will ultimately be, which related reports should we believe?

Hopefully, with Tesla involved at a high level in China, we'll be able to get to the bottom of it, and/or the legal system will reveal the truth.