The Enyaq Sporline is available with several battery size options and power outputs up to 262 hp.

The Volkswagen ID4’s more traditional looking Czech cousin from Skoda has just been unveiled in its sportiest guise so far, the Enyaq Sportline iV. It’s not quite as powerful as the 295 horsepower ID.4 GTX (this to us suggests Skoda is leaving room for an RS model), but once version does have two motors and all-wheel drive, as well a light sporty makeover both inside and out.

That version is called the Skoda Enyaq Sportline iV 80x has a combined power output of 262 horsepower and 425 Nm (314 pound-feet) of torque, which it can only maintain for 30 seconds at a time. There’s also an Enyaq Sportline iV 80 model that has the same 82 kWh battery pack, but only a single 201 horsepower motor driving the rear wheels.

If you don’t want the big battery pack, Skoda offers the Enyaq Sportline iV 60, with its 62 kWh battery pack and 177 horsepower electric motor. So far the manufacturer has not mentioned how quick any of these models are, but we can estimate based on the performance figures that Volkswagen provided for the ID.4 GTX (0-100 km/h in 6.2 seconds, top speed of 180 km/h or 111 mph).

We therefore estimate that the Enayaq Sportline iV 80x probably needs around 7 seconds to sprint to 100 km/h (62 mph). Top speed for all Enyaq models revealed so far is 160 km/h (99 mph), regardless of trim, and the Sportline models make no exception.

All Sportline Enyaqs do get 15 mm lower front suspension and 10 mm lower rear suspension. The models come with specific springs and dampers that are stiffer than the regular model’s and there are also some visual differences too: gloss black trim around the faux grille and some front bumper details (the bumper itself is Sportline-specific), as well as on the mirrors, window frames, roof rail and the diffuser in the rear (also a Sportline-specific part).

Sportline models also feature bigger rear spoiler, finished in matte black, all the script on the outside is black instead of bright and the 20-inch wheels are also unique (they can be upgraded to 21-inch wheels at extra cost). Skoda has so far not announced pricing for this model. 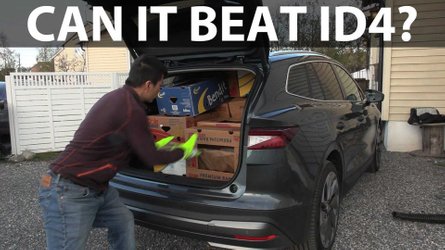 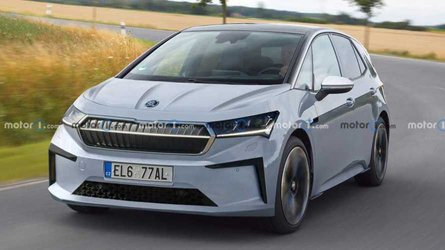 This Is What The Skoda Version Of The VW ID.3 Might Look Like
By: Andrei Nedelea
++
++
Got a tip for us? Email: tips@insideevs.com