Can the Model Y tow a light camper? Sure, but how much range will it lose?

The Tesla Model Y electric crossover can tow up to 3,500 pounds, at least according to official specs from Tesla. While that may not seem like much, many compact and midsize crossovers have maximum tow ratings that are similar.

With that said, if you're planning to tow a camper with your Model Y, you're going to want to search for a small, lightweight camper to ensure you have a usable range for longer road trips. Something aerodynamic is also key.

The Tesla Model Y has an EPA-estimated maximum range of 326 miles, which is for the all-wheel-drive Long Range version. The Model Y Performance comes in at 303 miles.

Camp365 put together a short video that comes across like a commercial with a voiceover artist. However, it's highly informative and it proves exactly what it's attempting to prove. According to Camp365, the Model Y is a highly functional family crossover with lots of room for passengers and cargo. However, they wonder whether it's capable of towing a camper long distances without stopping too often to charge.

Camp365 says its lightweight foldable cabin is aerodynamic, easy to tow, and sleeps up to six people. They sent it out on a typical camping trip with a Model Y Long Range and two electrical engineers to test its performance and battery range. They also wanted to determine if a sway bar is needed, as well as to make sure the driver could use both side mirrors.

In the end, Camp365 determined that the Model Y handled well with the foldable cabin in tow. In addition, the full setup was able to travel 218 miles on a single charge, only losing about 30 percent efficiency, which is impressive. 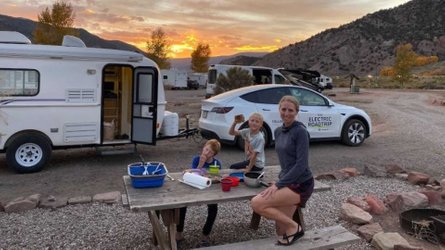 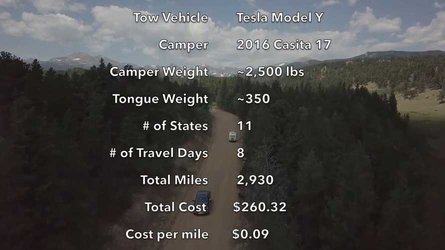 Watch the short video for many more details about the Model Y and the Camp365 cabin. Then, head down to the comment section and leave us your takeaways.