We analyze the 4680 battery pack image that Munro says "came to him somehow."

Sandy Munro gave a presentation at a “Charged EVs” virtual conference. The complete YouTube video of the presentation can be seen here, and we've also embedded it at the bottom of the article. The photo is at 7:32 in the video. Also, you can download the full slide show at the Chargedevs Virtual Conference website. There’s other interesting EV-related material at chargedevs.com website. View all their virtual conferences there.

Describing the photo, Sandy said “This is a picture that came to me somehow,” so obviously we don’t have a source. However, Sandy has been very good so far in his predictions, and this makes us believe this photo is legit. The whole video is worth a watch. Sandy discusses many interesting topics including Tesla’s mono castings and solid-state batteries.

Look at the photo and see what you think. 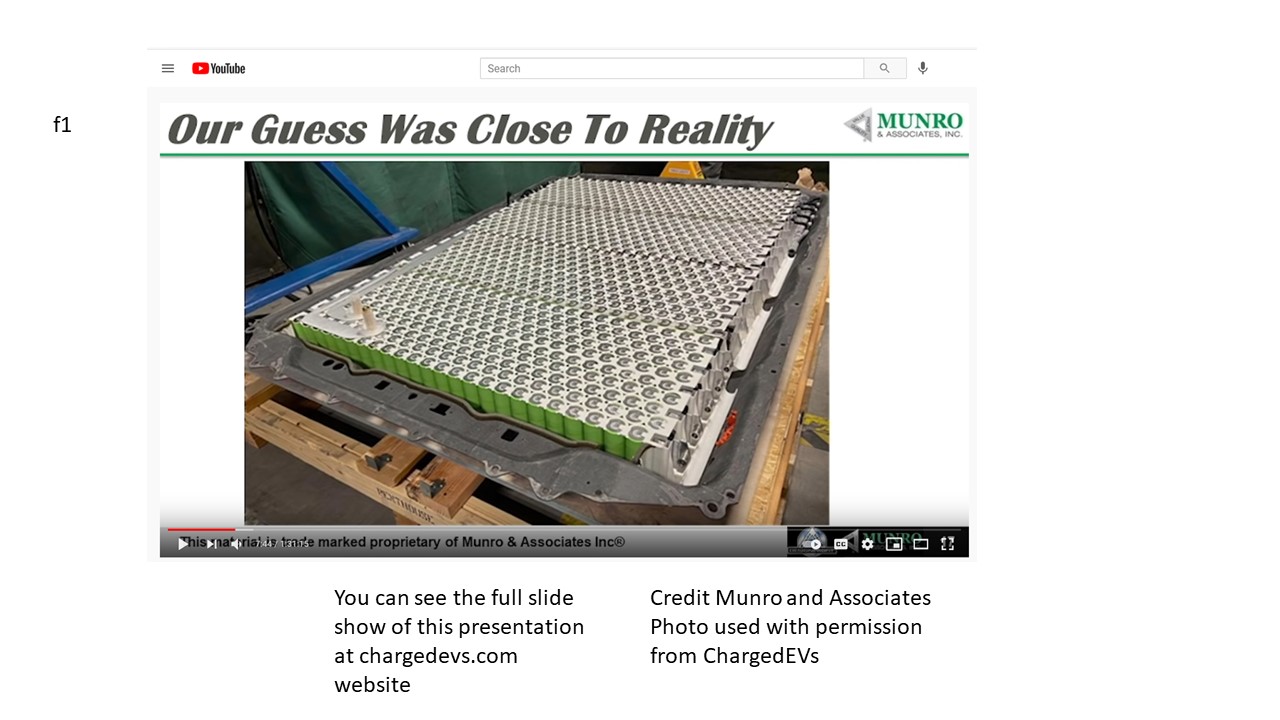 Our heat transfer consultant Keith Ritter took a look at this picture and we would like to share his thoughts on what the image shows. Our speculations on what we see in this photo are on the marked-up photo in figure 2. 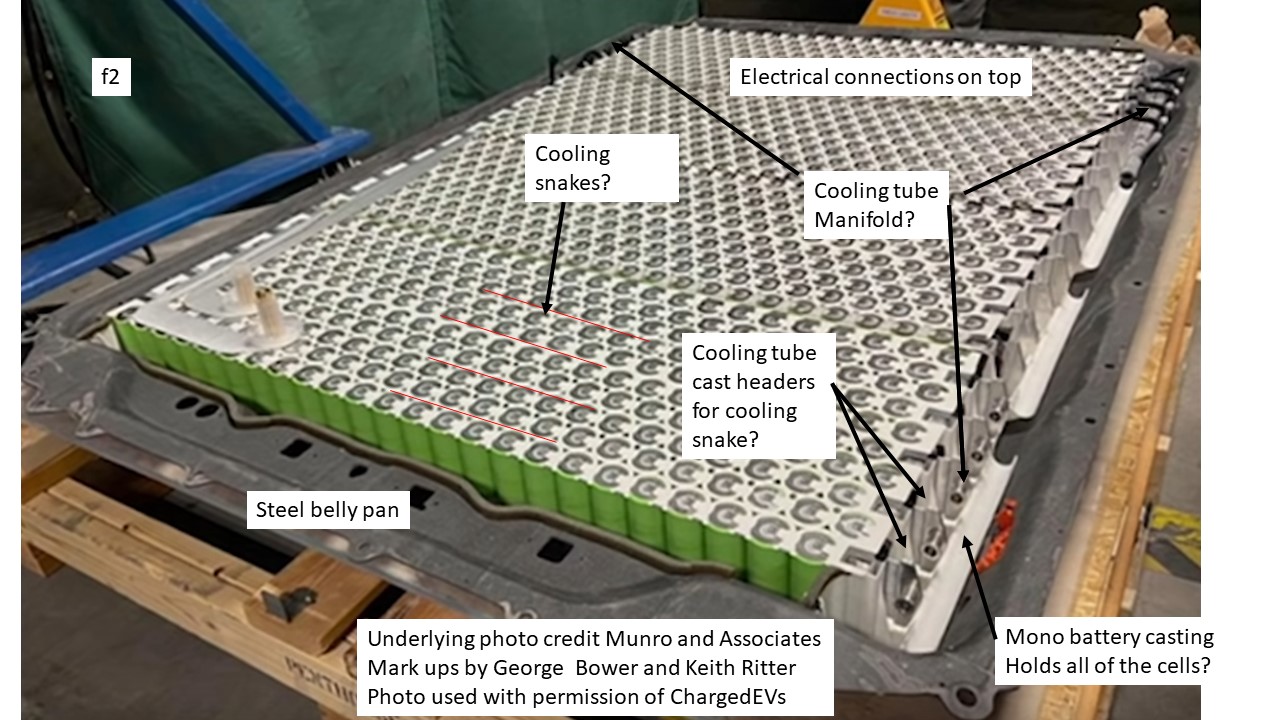 Marked up photo Sandy Munro posted with our thoughts on what it shows.

First, we notice that the cells are all inserted into what appears to be a casting. Call it a “mono battery." This “mono battery” is then put into a steel pan much like the Model 3's and then into the car as an assembly like the Model 3. There are no individual modules. The cells go right into the pack/casting commonly called “cell to pack” or CTP.

This is speculation on our part since we can’t see the cooling snakes. However, note the cooling tube connects sideways at about mid-cell height similar to Model S/X/3/Y cooling snake connections. The bottom cooling plate connections are vertical and at the bottom. Therefore, our earlier speculation that Tesla would use flat plate cooling is probably incorrect. The evidence now points to a similar cooling method as Tesla Model 3 as shown below. 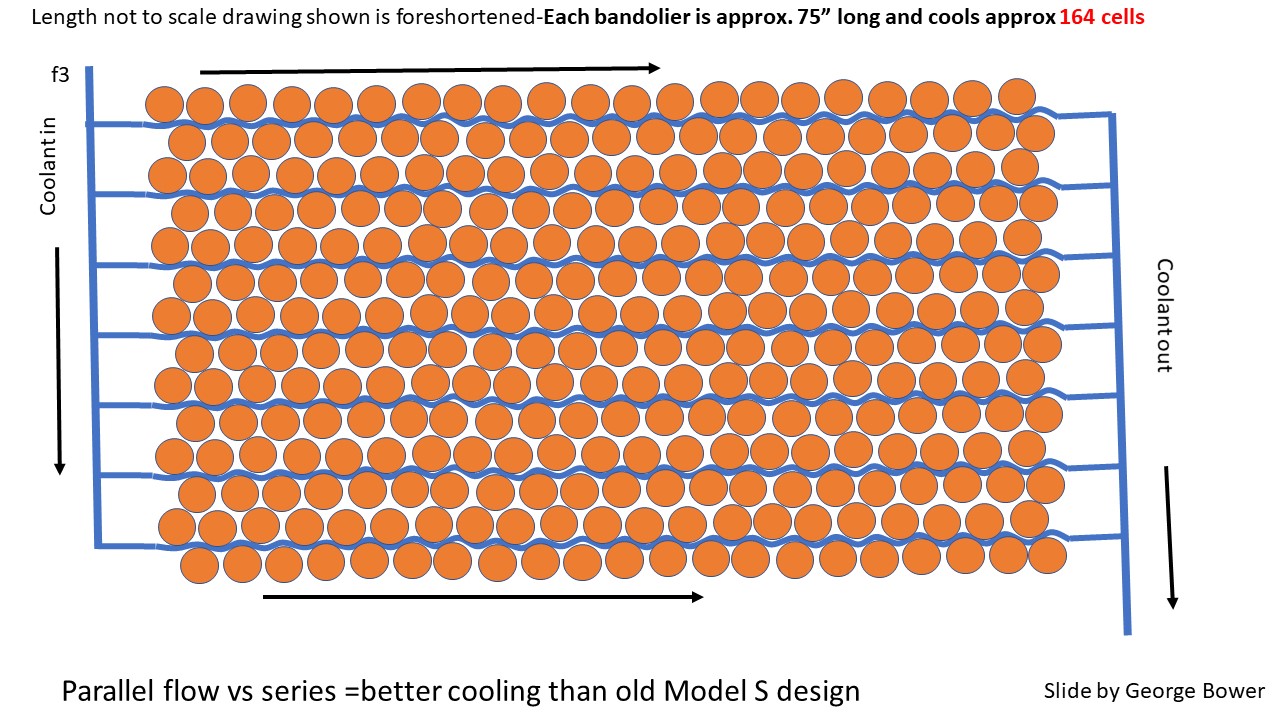 Finally, we note that all the electrical connections are on the top of the battery

The assembly of this pack should be much simpler than the Model 3 assembly process: Drop in epoxy cells for one row in place. Drop in the snake with epoxy pre-applied to the sides to adhere to the cell cans. Drop in the next row of cells. Repeat. We think the holes in the current collector plate are for injecting the structural foam into all the interstitial spaces. It appears the cooling snakes probably go from the bottom to about 70% up the cell can. They'd fill the rest with epoxy.

Any thoughts? Let us know in the comment section.