Tesla's manufacturing infrastructure includes two electric car plants (one in California and one in China). The company is in a process of adding two more later this year (in Germany and in Texas).

"We are currently building Model Y capacity at Gigafactory Berlin and Gigafactory Texas and remain on track to start production and deliveries from each location in 2021. Gigafactory Shanghai will continue to expand further over time. Tesla Semi deliveries will also begin in 2021."

Tesla's Fremont factory has the potential to produce up to 500,000 Model 3/Model Y a year.

The production of Model S/Model X was paused for a while to prepare the new, refreshed versions, but is expected to resume in Q2 2021 (delayed compared to the previous target of Q1 2021). The potential output will then be 100,000 a year (after a ramp-up phase).

According to the Q1 report, the Tesla Giga Shanghai plant has the potential to produce up to 450,000 Model 3/Model Y per year (no change compared to the previous quarter). The site is still expanding.

"Model Y ramp in Shanghai is progressing well. We expect that our Shanghai factory will continue to increase quarterly production output through the year. We recently improved our domestic supply sourcing ratio to over 90%. Vehicle exports to Europe and APAC continue to progress as planned."

Tesla Giga Berlin, under construction in Grünheide near Berlin in Germany, progresses quickly. Production of the Model Y will start in "late 2021". No info about other projects.

"In Europe, buildout of Gigafactory Berlin is continuing to move forward, with production and deliveries remaining on track for late 2021. Machinery for paint, stamping, castings, etc., continues to be moved into the building. In the meantime, we will continue to increase import volumes to Europe."

Tesla Giga Texas is under construction in Austin Texas. It's scheduled to produce Model Y (this year) and Cybertruck.

"In Texas, the factory buildout continues to progress quickly, remaining on track to start production and deliveries late this year. We recently began moving equipment into the building and are in the process of commissioning them in certain areas." 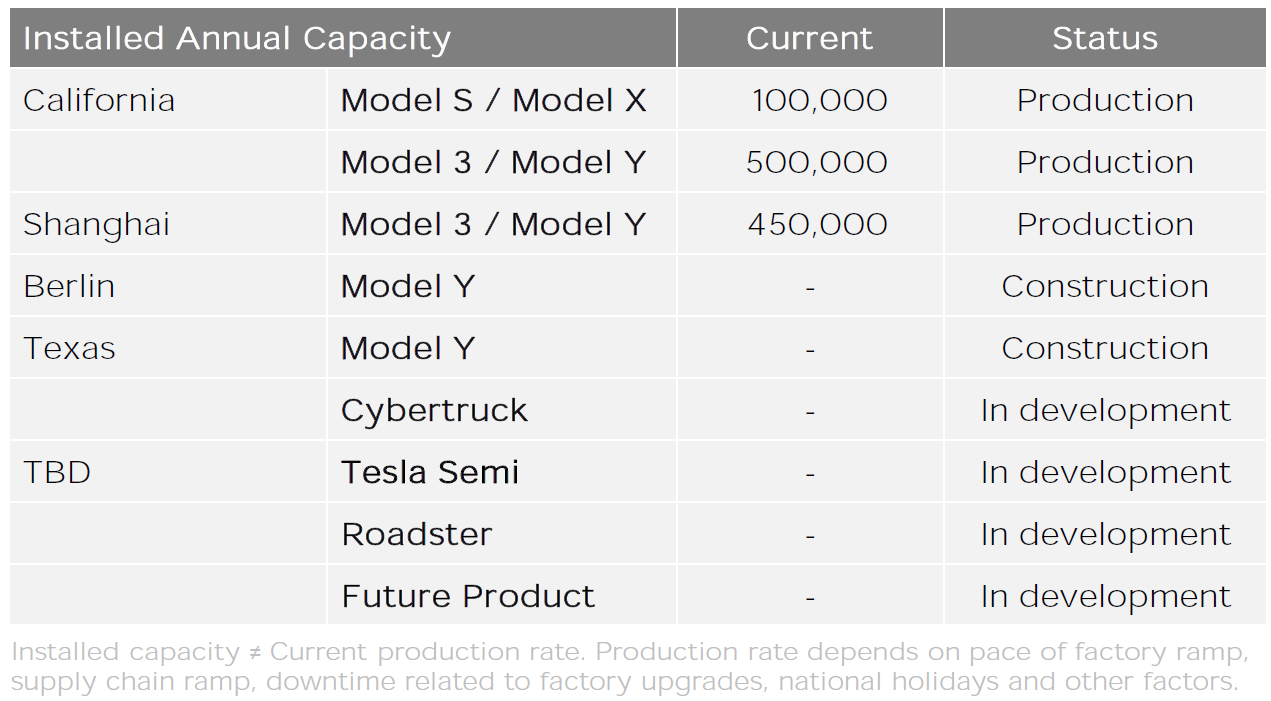