The Model 3 takes a commanding lead with record registrations. The seasonality of Tesla’s deliveries has never been stronger.

Italy’s EV sales get a substantial boost in March as the first quarter of 2021 ends with electrifying new records. The year started with rather soft numbers following a brilliant end to 2020, but a notable shift in pace now bodes well for the months to come.

We are finally getting the first strong signal of the year from Italy’s car market in the ongoing race to electrification. After somewhat unimpressive figures in January and in February, where double-digit year-on-year (YoY) growth failed to impress in absolute terms, monthly statistics from Unrae draw a picture in line with the rest of Europe’s major markets.

At over 171,000 registrations (best result since June 2019), the car market itself marks a strong recovery from very weak numbers in recent months, and it’s uncomparable YoY to March 2020, which recorded less than 29,000 registrations as the pandemic locked the nation. Petrol and diesel variants take 31% and 24.4% share respectively, while plugless hybrids – mostly mild-hybrid powertrains – settle at 27%, following a record share (28.8%) in February.

Full electric cars score their best absolute registration numbers to date, with 7,362 units. This represents a growth of 695% (!) YoY from 926 registrations in March 2020, when BEVs held up relatively well as ICE sales collapsed under Covid, and even beats December’s record number of 7,225 units. Full electric share of the market is now 4.3%.

Plug-in hybrids fair even better, scoring a massive 7,732 registrations, also their absolute record to date (and about 20 times the miniscule 389 units achieved a year ago, when PHEVs suffered a similar fate to ICE cars). This month’s result is worth 4.5% market share, giving plug-in hybrids an edge over BEVs for the third consecutive month, a new trend in a market more typically skewed towards pure electrics. How long will legacy automakers keep pushing these transitional powertrains before they finally surrender to BEV supremacy?

With this month’s numbers, plug-in vehicles achieve a combined share of 8.8%, a very promising figure in a rebounding car market, and one that will hopefully grow as the year progresses, along with the global economy. As always, further insight can be gained from individual registrations data: the Top 10 BEV chart for March is packed with new records! 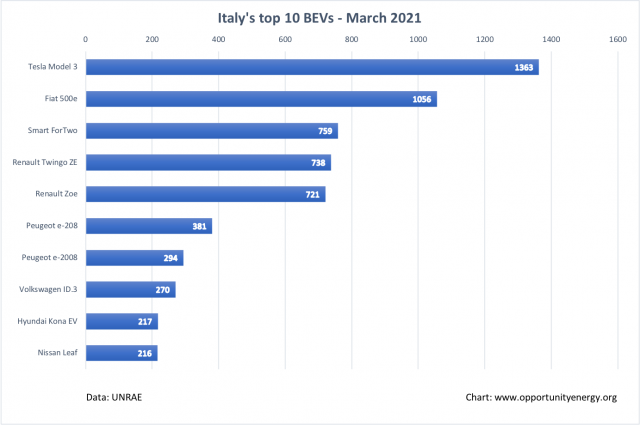 Tesla Model 3 is back to the top for the first time since September 2020, and it does so with its own record number of registrations, 1,363 units, beating the previous high by over 50%! The seasonality of Tesla’s deliveries has never been stronger. Fiat 500e, despite a great performance at 1,056 units, is a distant second and gives up the throne following three consecutive months at the top of Italy’s BEV sales. Smart ForTwo, itself at the model’s record 759 registrations, completes the podium.

A slew of French models follows the top 3. The new Renault Twingo ZE, also a favourite of the Italian market, takes fourth position with 738 registrations (model’s new record), beating its own sibling Renault Zoe, now fifth with 721 units. It looks like the Zoe will have a hard time trying to get back to last year’s glory, with so much fresh competition, and even more on its way. Competitors Peugeot e-208 (381 units) and e-2008 (294) follow in fact in sixth and seventh place, also marking their own new records and slowly eroding Renault’s dominance in the B-segment. 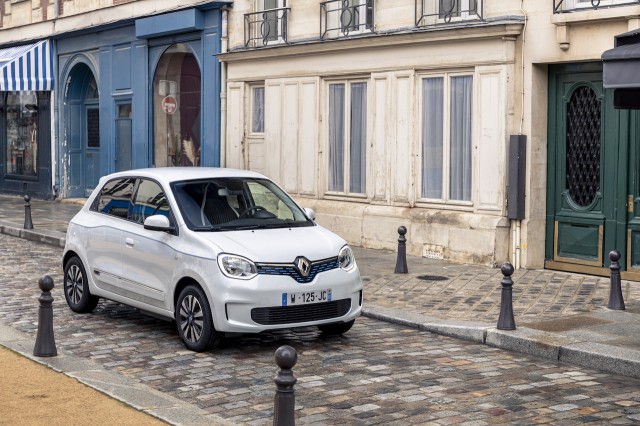 In the lower ranks of the chart, VW ID.3 makes its first 2021 appearance in eighth position with 270 registrations, confirming a so far lukewarm reception by the Italian market – amid great sales levels elsewhere Europe. Will this trend change anytime soon? Hyundai Kona EV and Nissan Leaf close the Top 10 chart without surprises at 217 and 216 units respectively, in line with recent months.

The first quarter of 2021 started off without truly impressive notes but has now ended with a strong push (more on Q1 in a separate article), putting this year’s stats on the right track for yet another season of triple digit growth. Will EV adoption keep this pace, and maybe even accelerate further in the next quarters? With the charge of new BEVs shortly expected on the market, we have little doubt about it.

Italy's EV Market Tripled In 2020, Despite COVID: Can It Triple In 2021?
Italy's EV Charging Infrastructure Is About To Get A Major Boost