Let's take a look at a very special DC fast charging test and see the results that you will probably never repeat.

The Nissan LEAF was one of the first electric cars with lithium-ion batteries on the market. Overall, it was a good electric car, but with a major weak point - the lack of an active battery thermal management system (TMS).

Despite that, the company has improved the car over the years, with higher battery capacity (24 kWh, 30 kWh, 40 kWh and 62 kWh), higher onboard charging power, and a higher power electric motor/power electronics. However, the lack of active TMS has remained the fundamental flaw of the LEAF. We can only guess that the company wanted to save costs.

As a result, the LEAF never had a chance to fully show its potential. The longevity of the battery pack was affected (especially in hot climates) and the charge/discharge performance was significantly reduced in both hot and cold climates. It would not be as big an issue for a city car, but the LEAF was targeted as a replacement for the primary car.

Today we will analyze a little bit deeper our previous DC fast charging test of the 2020 Nissan LEAF Plus (62 kWh) SL from October 2020, as it's a very specific case that shows what the LEAF could actually deliver if it was equipped with a liquid cooling battery system.

The car arrived at the charging station with basically 0% State of Charge (SOC) and low battery temperature. Moreover, the CHAdeMO charger rated at 50 kW, was able to provide close to 70 kW. Those higher power CHAdeMO chargers are not common.

This test might then be considered as the best-case scenario. We assume that typically users will not arrive with low battery temperature, especially after driving for some time, and the power output will be limited.

The 2020 Nissan LEAF Plus SL was able to achieve a peak charging power of about 69 kW. The shape of the charging curve is surprisingly good, compared to what we usually see when charging LEAFs. 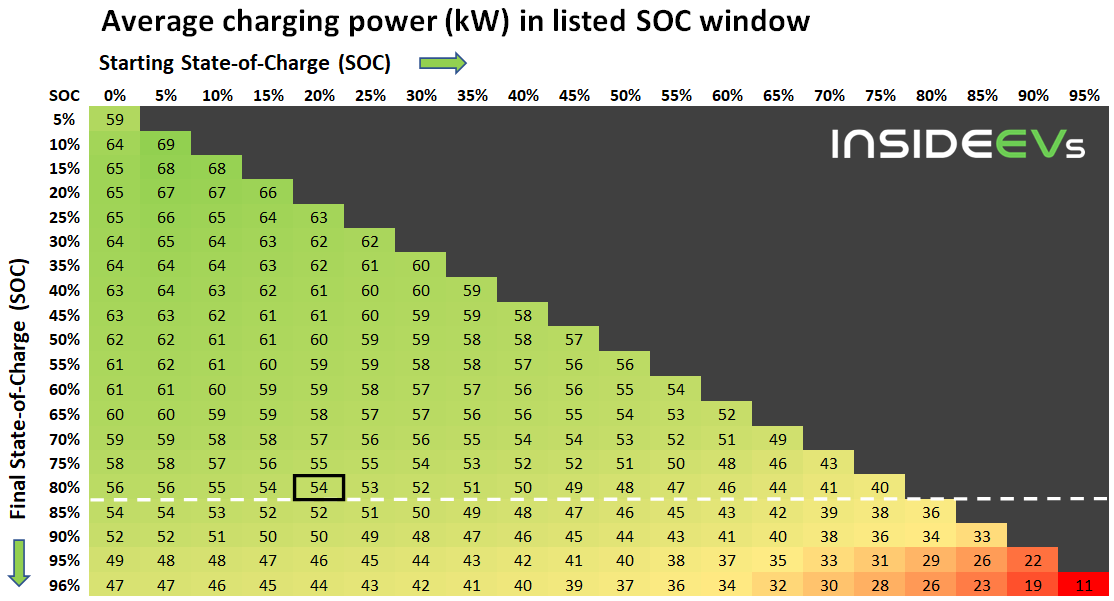 The peak C-rate* - charging power in relation to the total battery capacity of 62 kWh is about 1.1C.

The conclusion of this test is that Nissan missed an opportunity to make the LEAF a great car for longer journeys and for use in higher temperatures. No one would probably complain about the charging curve like that if it would be easily achievable.

But it's not easily achievable. Kyle Conner reports that he first skipped conducting the test because the car arrived at high battery temperature. And in the completed test, described above, the car went into power reduction mode after leaving the charging station.