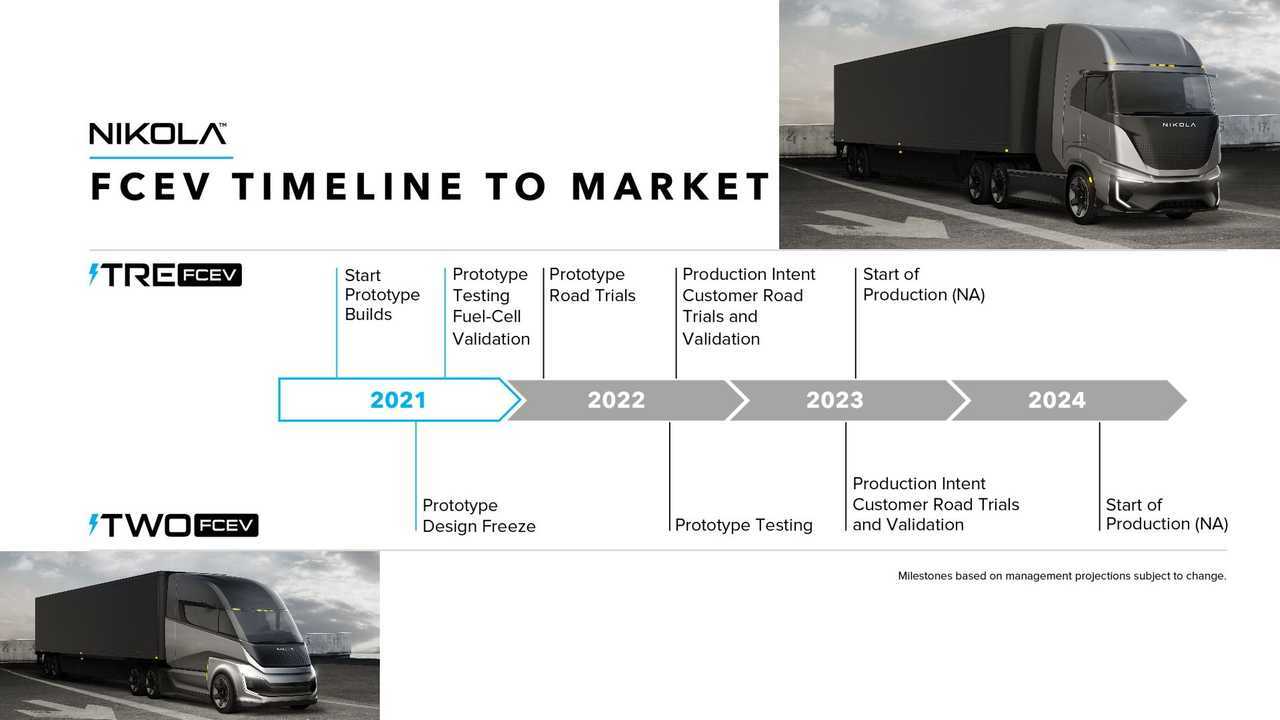 The Nikola One will now be called Nikola Two Sleeper.

Nikola has been a little quiet since it killed the Badger and made a new deal with GM. We were waiting for more news on its clean hydrogen distribution plans since that will be crucial for its trucks to succeed. Yet, the company preferred to discuss its trucks first, releasing a timeline for reaching the market. It also revealed some changes.

While the company would name the Nikola Two with a sleeper as Nikola One, it now seems to have realized it made no sense and decided to call it the Two Sleeper instead. That vehicle would have a non-stop range of 900 miles. It will be Nikola’s solution for the long-haul.

As you might have noticed, it is now a different truck than we have already seen. Despite Nikola's lawsuit against Tesla, it has changed quite a bit since it was first presented. Nikola mentions the prototype design freeze will happen in 2021, which means this design may still change.

This truck's timeline is rather simple: design freeze in 2021, prototype testing in 2022, production-intent customer road trials and validation in 2023, and production in 2024. Its chassis will be custom-designed for the North American market.

Regarding the Tre, we have already seen very different designs for it. This was the first one.

This one seemed to be the final one, especially because it is the one currently testing in the US, but you’ll notice it seems to have changed a lot until it became what seems to be the last.

Check the most recent Tre here.

The cab-over design will see two propulsion systems. The one with fuel cells is said to deliver a range of 500 miles and will help in regional transportation. The Tre derivative powered solely by a battery pack is designed for metropolitan and regional deliveries and has a maximum range of 300 miles.

Check Out Nikola's Progress At Factory After 6 Months Of Construction

The timeline shows its development is much faster than that involving the Nikola Two. The prototype design freeze must have occurred in 2020. In 2021, we’ll have prototype testing and fuel cell validation. In 2022, Nikola will start road trials and “production-intent customer road trials and validation.” Production is expected to begin in 2023.

We asked the company what that meant, and the answer was that the deal with GM allows Nikola to use Hydrotec “as part of a global supply agreement.” In Europe – where the Tre will also be produced – the chosen fuel cells will come from Bosch.