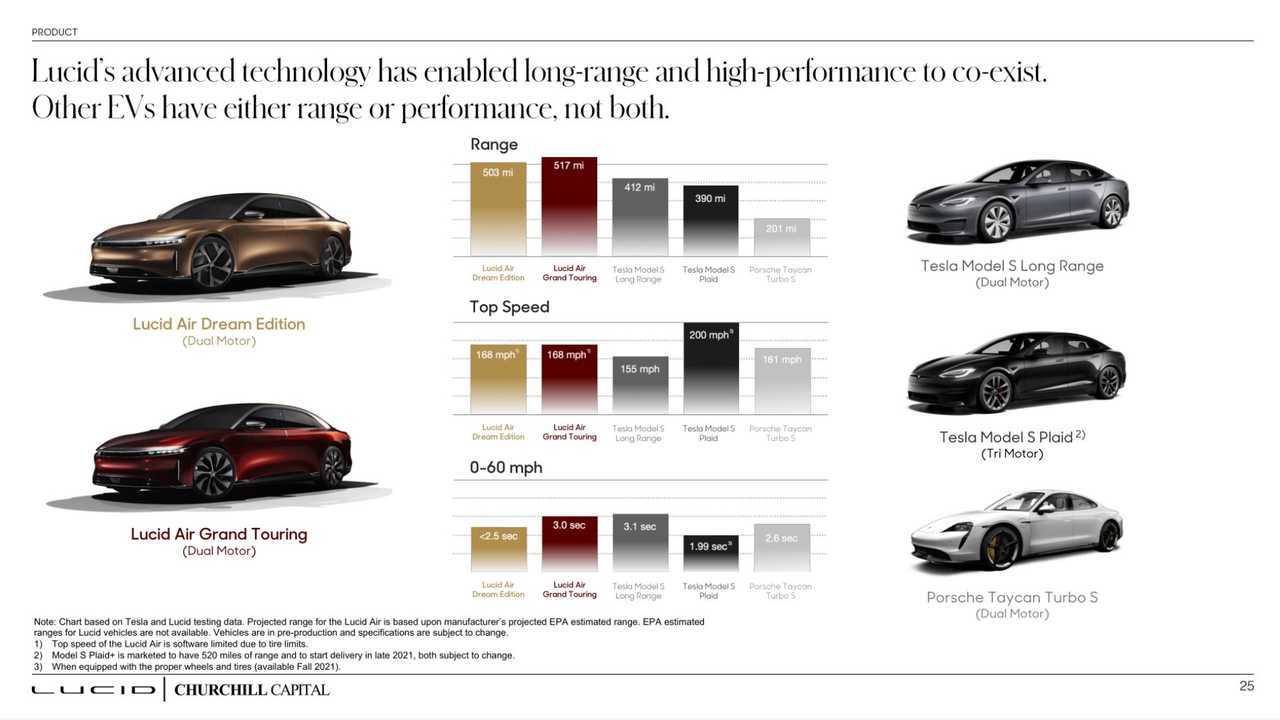 Not only the Mercedes-Benz S Class but almost all EVs.

As we already told you, making Lucid public gave Peter Rawlinson some peace of mind to take the time his company needs to make a very high-quality product. This is what he wants the Air to stand for. Regardless of that, Lucid did not wait to compare the Lucid to all its competitors in the Lucid Investor Deck – not only the Mercedes-Benz S Class but almost any other electric car currently for sale.

The slide above shows Lucid believes the Air is the only one able to offer superior performance and range at the same time. Ironically, Lucid compares the Air with two Tesla Model S derivatives, a vehicle Rawlinson has repeatedly said that does not belong to the same market segment as Lucid’s electric sedan. The Porsche Taycan Turbo S is also there.

The Lucid Air is the only one to present a range of more than 500 miles. Yet, it is the second-best one from 0 to 60 mph and in top speed.

Lucid continues to compare the Air with these other electric vehicles when it comes to charging. According to the startup, the 900V battery pack accepts 300 miles of range in only 20 minutes of charging. That makes it beat the Model S – which would require 15 minutes to add 200 miles – and the Taycan. The Porsche has an 800V system but adds only 160 miles of range in 22.5 minutes.

Lucid’s argument here is that it does not make any difference for the car to have fast charging if it is not efficient in converting this electricity into movement. In that sense, the Air would be the most energy-efficient vehicle in the market. Well, it is not yet in the market, but you got the point.

The electric sedan would have achieved that – among other things – with an “incredibly power-dense drive unit. In this slide, Lucid does not name its competitors, but it does not demand a lot of effort to recognize the Model S/Model X motor presented as that an American EV brand uses in its full-size model.

The same “American EV brand” has another motor there – for its compact model, also known as Model 3/Model Y. The last contender is the unit from a “German EV brand,” used by its performance model. Porsche will probably be offended to be called an EV brand while it still sells so many ICE models, despite how brilliant the Taycan is.

Lucid’s driving unit offers almost triple the power-to-weight ratio of the best competitor, which means its motor delivers much more hp/kg than the rest of the vehicles in this comparison.

This slide pits the Air against the only car that Rawlinson seems to consider as an opponent for Lucid’s electric sedan: the Mercedes-Benz S Class. Lucid compares it against all S Class versions with similar prices, and the electric sedan beats the German competitor at acceleration, power, and price.

Lucid Postpones Production, But Pokes Fun At Tesla About Luxury

Lucid Has Plans For An Electric Pickup Truck Among Future Products

Although performance is important, the S Class is a reference in build quality, luxury, and opulence. Lucid did not forget about that but tried to reinforce that “post-luxury” is about refinement and technology.

This is why it presented its Infotainment System as a seamless connected experience, offering ID Profiles to ensure a personalized driving experience, as well as predictive analytics. That means the car “learns” and tries to make its use easier.

Lucid also highlighted its MLA – or Micro Lens Array. Ironically named after one of the platforms used by Jaguar Land Rover, the headlights promise to provide a much more efficient lighting system than any other automaker has presented before.

Finally, the company stressed that the Air would use 32 sensors on board for an “advanced autonomous driving functionality,” which is not the proper way to put a level 2 driving assistant such as Autopilot or FSD. If it requires human intervention, it is not autonomous. That's something that will only be achieved from level 4 up. No manufacturer came even close to offering that so far.