And the effective price is now lower too.

Mitsubishi is introducing in the U.S. an all-new conventional Outlander, but the plug-in hybrid version is getting just an upgraded version of the previous generation, rumored in early 2020 and announced in the Summer 2020.

The 2021 Mitsubishi Outlander PHEV, with 15% more battery capacity (13.8 kWh instead 12 kWh) and 10% more electric motor output, has recently received an official range and efficiency rating from the EPA. It's esentially the version available in Europe since mid-2018 as the 2019 model year. 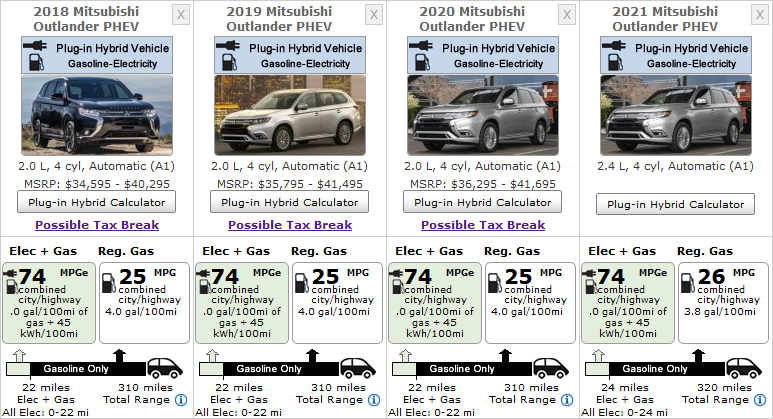 That's not even a 10% improvement, but it's better than nothing, especially since the price remains the same.

When it comes to the price, the effective price is actually lower than before, because the eligible federal tax credit increased to $6,587 (adjusted for higher battery capacity). As a result, the car starts effectively at $30,903. Previously it was respectively $5,836 and $31,654.

US: Mitsubishi Outlander PHEV Sales Down In Q4 2020

Europe: Mitsubishi Outlander PHEV Was Best-Selling Plug-In Hybrid SUV In 2020
By: Mark Kane
++
++
Got a tip for us? Email: tips@insideevs.com