Tesla Is Number One In Consumer Reports' 2020 Owner Satisfaction Survey

Consumer Reports (CR) releases its owner satisfaction data every year and for the last three years, Tesla has been the leader. Well, we can now make that four consecutive years, because the EV manufacturer has done it again, easily beating its competitors - it was followed by Lincoln, Ram and Chrysler.

This is certainly telling of just how much those who have bought a Tesla love their car. CR does point out that even though Tesla and Lincoln top the tables, both manufacturers actually place near the bottom when it comes to reliability ratings.

Tesla scored 5/5 in the Driving category, 4/5 for Comfort, 4/5 for In-Car Electronics, 3/5 for Cabin Storage and 1/5 for Value. It is worth noting, though, that all premium automakers got a 1/5 for Value, so this doesn’t just apply to Tesla - it even applies to Lexus whose impressive reliability record has gained it an increasing number of fans who value dependability.

Consumer Reports does point out that this survey doesn’t necessarily mean some brands are better than others, but instead that the vehicles were not up to the expectations of those who bought them. Basically, don’t use the CR chart as a be-all and end-all list of which brands are better than others and try to make your own mind up from multiple sources and your own test drive experience before making an automotive purchase, especially when it comes to EVs. 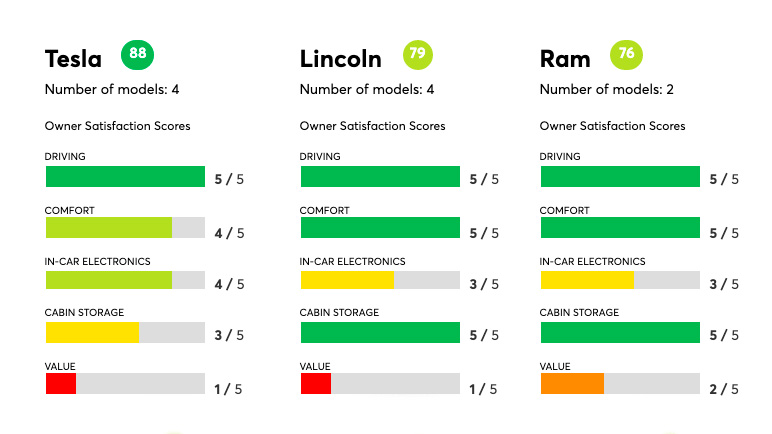