...and compare it to several other city models.

The Renault ZOE is currently the best-selling electric car in Europe with a cumulative result already far above 250,000 (despite no significant volume recorded outside of Europe).

Here we will try to analyze DC fast charging of this important model, using test results released by Fastned, and then compare it to several other small, city cars to better understand what this type of EV is capable of.

The ZOE is of course not envisioned for long-distance travel, nor for very often use of DC fast charging (it has a 22 kW three-phase on-board charger). The first generations of ZOE were not even equipped with the DC charging option. Since the ZOE Z.E. 50 came out, many potential customers may wonder whether it's worth it to buy the option of DC fast charging (often at around €1,000 or so).

According to the test results, the Z.E. 50 (equipped with a 55 kWh battery) can recharge at up to 46 kW. It's not much, but the simple air cooling of the battery probably is too weak to accept higher power. That's a major difference compared to 100 kW noted by the Peugeot e-208.

The charging curve is pretty much plain, with peak output available at up to 30% SOC.

UPDATE (March 7, 2021): We updated/corrected some of the numbers (average values) and the Average charging power chart.

Because of the 22 kW on-board charger (three-phase), there is basically no point in searching for/using DC chargers at SOC above 60%, because the advantage over 22 kW AC charging will be low (a few kW on average) at a much higher cost (usually). 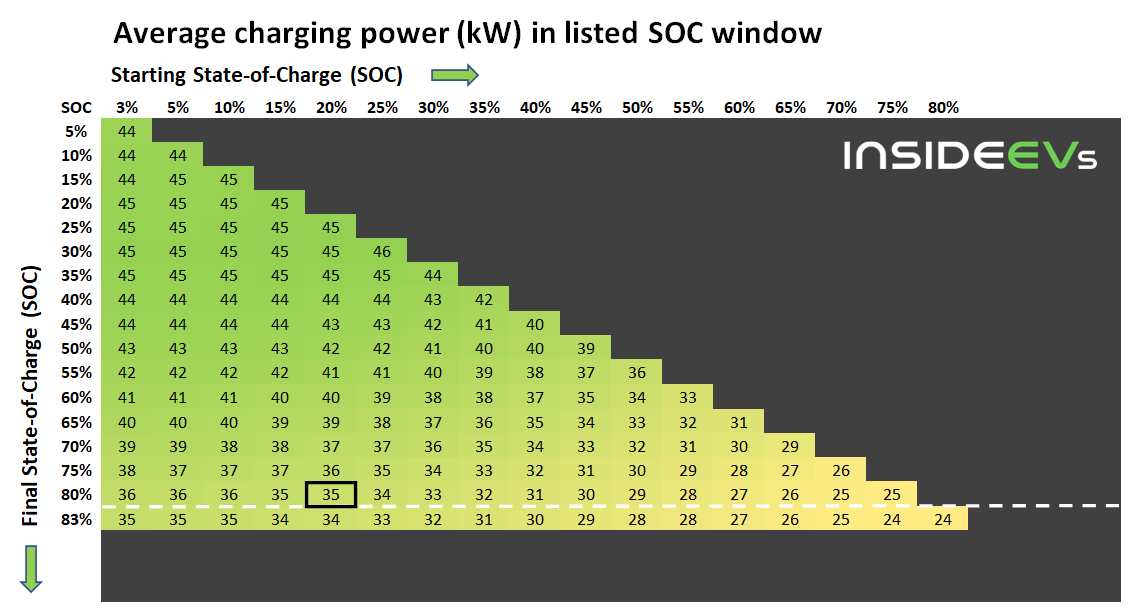 The peak C-rate* - charging power in relation to the total battery capacity of 55 kWh - is about 0.83C.

We knew it would be low, but it turns out lower than in the case of the Volkswagen e-up! (2nd model evolution), Škoda CITIGOe iV and SEAT Mii Electric, which is a surprise.

There is really nothing fast in the ZOE DC charging and we believe that only in some specific cases, the purchase of the relatively expensive option would be justified. For the majority, the 22 kW on-board charging system in the ZOE is enough and there is no stimulus to upgrade. It could be different if the DC charging speed was faster.

The charging power curve reveals immediately the winner - Peugeot e-208 - offers the highest levels (up to 100 kW), although it falls quickly in the end.

The rest of the group sits under 50 kW. Both the BMW i3 and MINI Cooper SE sustain a stable level over a wide window of SOC thanks to the liquid-cooled battery pack. The ZOE and VW's triplets are left behind, but those are also more mainstream, less expensive models. 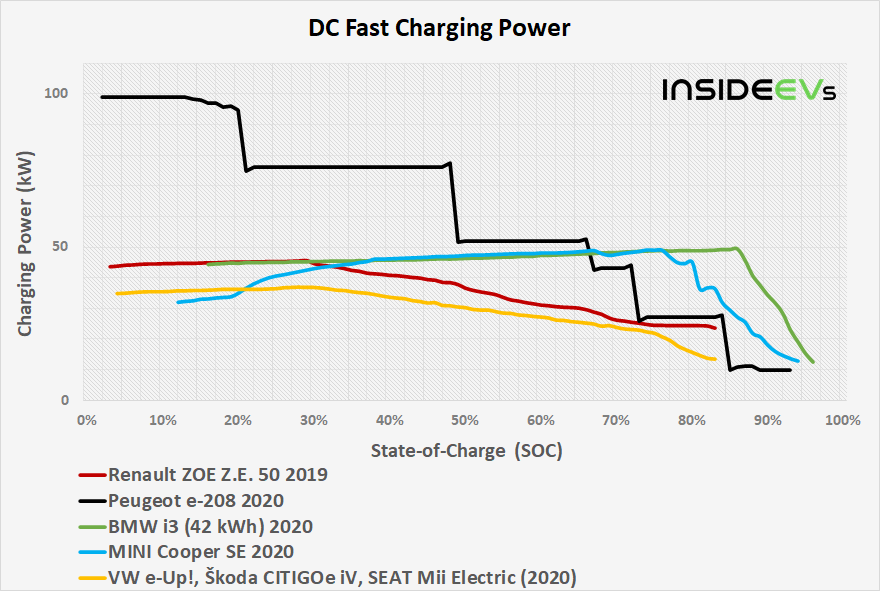 The peak C-rate comparison is quite interesting, as it shows ZOE on the bottom with the lowest charging output per battery capacity - below VW's triplets

On the other hand, the MINI Cooper SE has a far more aggressive charging curve than the BMW i3. The smaller pack of the MINI withstands similar charging power as the BMW. 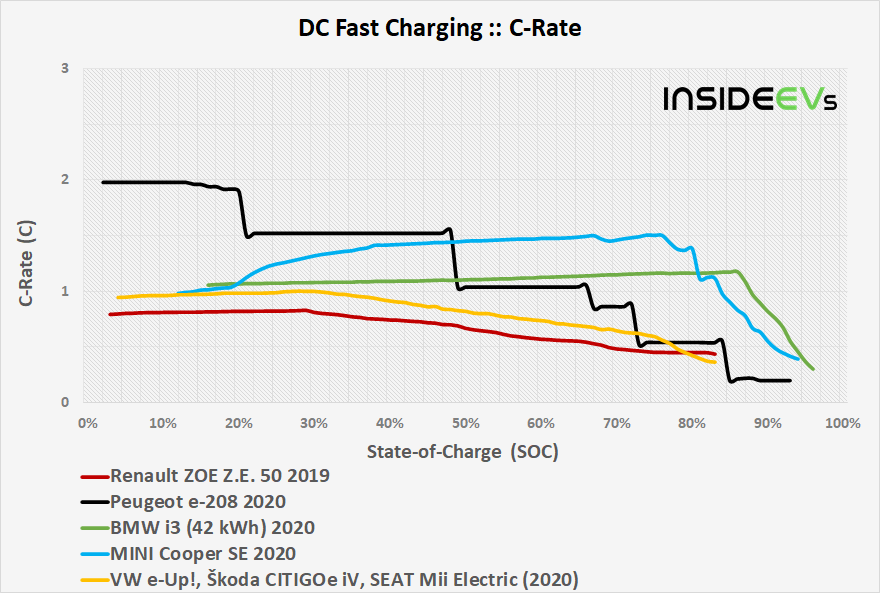 The last comparison is one of the most important because it shows us several EVs and their effective speed of replenishing the WLTP range.

The Peugeot e-208 really stands out among subcompact electric cars. Both, BMW i3 and MINI Cooper SE are stable above 5-6 km/min, while ZOE Z.E. 50 barely beats the triplets. 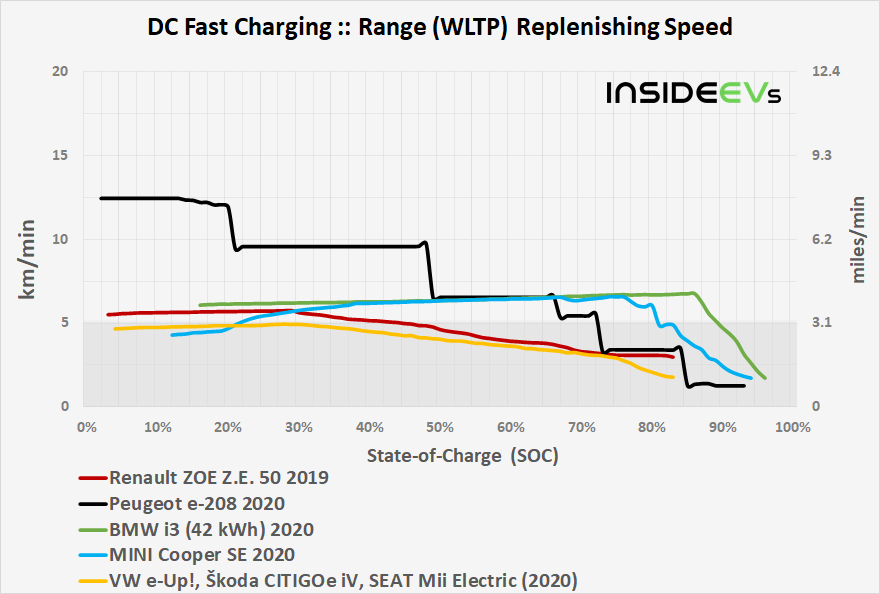