There has to be a catch, the Taycan should destroy this Panda.

The Porsche Taycan is one of (if not the) quickest production cars ever built. It ranks right up top with the Tesla Model S. It's also the most expensive electric car on the market today, with a starting price of over $100,000. Choosing the range-topping Turbo S and checking all the boxes more than doubles that sticker price. However, this premium electric speed demon struggles to keep up with an itty bitty four-by-four in a snowy drag race.

We'll start by saying it appears this was all done in good fun. It's actually more silly than serious. However, it's also not very safe. Something could have gone drastically wrong here. As you can see, there are people, fences/gates, and parked cars nearby, the Taycan is struggling to gain traction, and the cars are drag racing relatively close to one another. One little slip in the wrong direction or a total loss of control could have ended very badly. Fortunately, the quick display went off without a hitch.

The all-electric Porsche comes standard with all-wheel drive and cranks out an incredible amount of instant torque and solid horsepower. According to Porsche, The top-of-the-line Turbo S makes 760 horsepower and will rocket you to 60 mph in just 2.6 seconds with launch control. Even if you choose the entry-level 4S, you're looking at 522 horsepower and a sub-4-second zero-to-60-mph time.

Meanwhile, the Fiat Panda 4x4 is not a star at the drag strip. It's also super cheap compared to the Taycan, in addition to being practical, simple, and unassuming. We don't have any details about its specs, since it appears to be an older used model. However, we can guarantee you it lags way behind the Taycan in every way. However, it gets the jump in the snow and holds its own remarkably well against the Taycan. 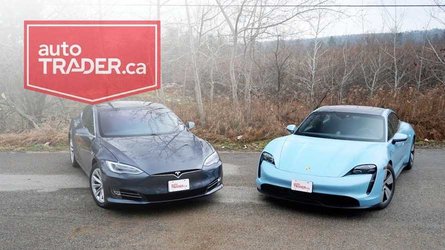 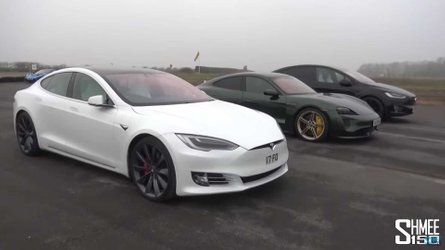 Check out the very brief (and fun) video above. Then, scroll down and leave us a comment.