Construction will start in Summer 2021 and the first phase will be ready by the end of 2023.

Britishvolt announced the selection of Blyth, Northumberland in the North East of England, as the site of its first battery gigaplant. Previously, the emerging company suggested that the lithium-ion cell factory might be located in South Wales.

The total investment in the plant will be £2.6 billion (€2.82 billion / $3.43 billion). The construction, on a 95-hectare site, formerly the site of the Blyth Power Station, is promised to start in Summer 2021. The production is expected to start by the end of 2023, while by the end of 2027 the plant should be completed (three phases).

At that point, Britishvolt hopes to produce enough batteries for more than 300,000 electric cars annually and directly employ 3,000 people. An additional 5,000 to be employed in the supply chain. 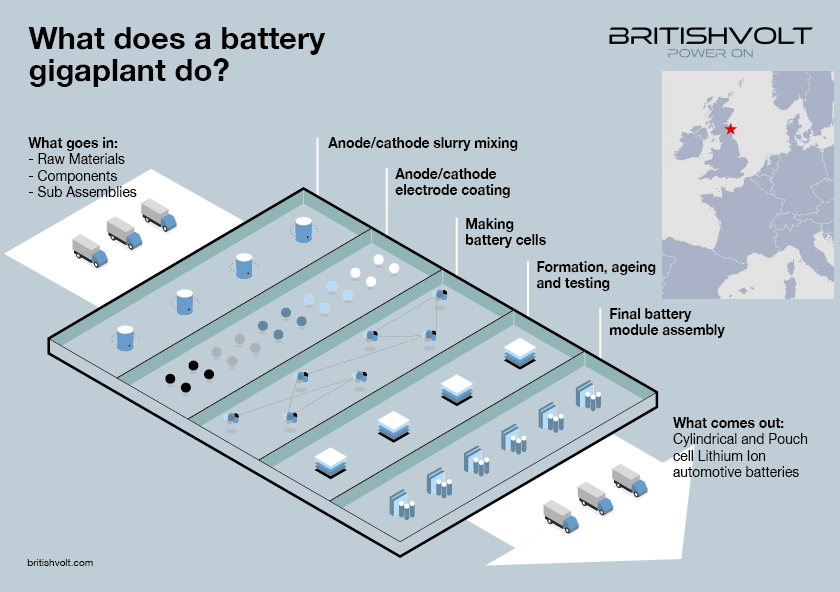 According to Reuters, Britishvolt so far has raised about £10 million, which is a drop in the sea of its needs. Soon, the company will have to raise some serious capital, and it seems that the project envisions substantial support from the British government:

"Britishvolt has applied for backing from a £1 billion British government fund set up to support the mass production of batteries and help the auto industry shift towards making electric vehicles (EVs)."

We guess that the government might be willing to spend some money on the project, especially if Nissan limits its operation in its nearby plant in Sunderland.

“We are delighted to have secured this site in Blyth. This is a tremendous moment both for Britishvolt and UK industry. Now we can really start the hard work and begin producing lithium-ion batteries for future electrified vehicles in just three years. It is crucial for the UK automotive industry and for the entire economy that we are able to power the future. The sooner we start, the better.

“Blyth meets all of our exacting requirements and could be tailor made. It is on the doorstep of major transport links, easily accessible renewable energy and the opportunity for a co-located supply chain, meets our target to make our gigaplant the world’s cleanest and greenest battery facility.  We have had an extremely warm welcome from Ian Levy MP and Northumberland County Council and are looking forward to working with them closely on this project.”