Things improved significantly in China and we are not expecting anything below 150,000 a month in the last two months of the year.

The Chinese plug-in electric car market is returning to its best as October turned to be the third-best month ever.

The total volume increased 120% year-over-year to 147,285, which was enough to capture 7% of the car market. The overall car sales also increased in October, by 9%.

The market remains BEV-friendly, as 82% of the plug-in sales were all-electric cars. BEVs are also expanding much quicker (up 128% year-over-year) than PHEVs (up 93% year-over-year).

The top-selling model in China is Wuling's Hong Guang MINI EV with an outstanding 20,631 units in October (slightly below the 24,000 wholesale shipments).

The demand for this tiny, all-electric 4-seater is very strong and according to the latest news, the production level of up to 25,000 in October will increase to 30,000 in November and 33,000 in December.

Since there are already 52,672 Hong Guang MINI EV delivered to customers, there should be no problem to exceed 100,000 this year - not bad for an all-new model that entered the Chinese market in the Summer.

Despite the surge of Hong Guang MINI EV, Tesla Model 3 with stable sales (12,143 in October) will not have any problem to remain the top-selling model in 2020. 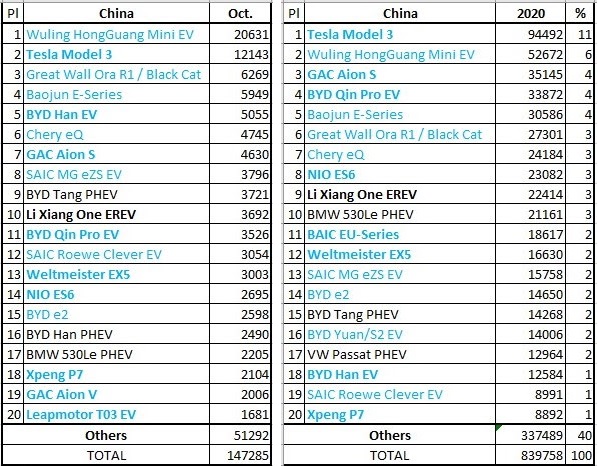