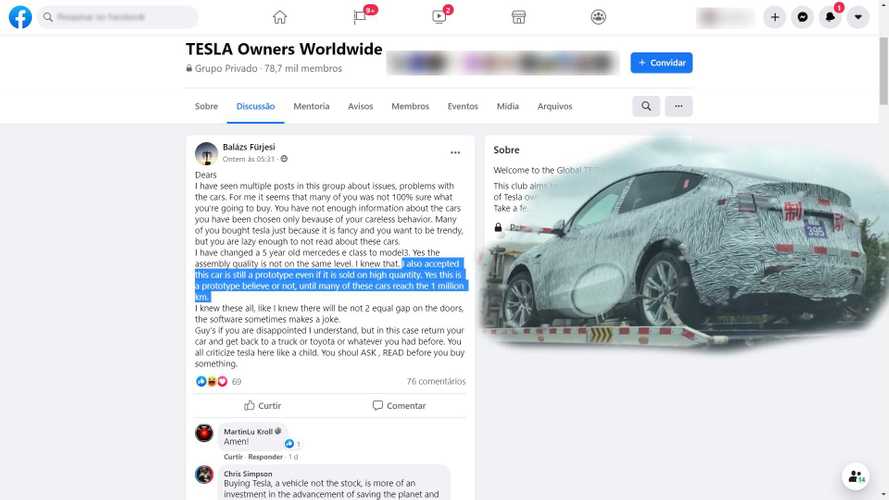 Are all Tesla vehicles in beta testing, like Autopilot and Smart Summon?

Tesla’s quality issues keep emerging almost as fast as the company is selling new cars. That also raises complaints, but a Tesla fan has had enough of it. In a post at the Tesla Owners Worldwide Facebook group, he tried to clarify that by claiming Tesla does not sell production cars: it sells prototypes. Does that mean all Tesla vehicles are in beta testing, just like Autopilot? Weirdly, that hypothesis makes somea lot of sense.

Balázs Fürjesi wrote that “many of you bought Tesla just because it is fancy and you want to be trendy, but you are lazy enough to not read about these cars.” A little further, he presents his hypothesis that “this is a prototype, believe it or not, until many of these cars reach 1 million km.”

The Tesla fan ends his reasoning asking people that do not accept this idea to “return your car and get back to a truck or Toyota or whatever you had before” and stop criticizing the company “like a child.”

While the discussion on the Facebook group has stirred quite some controversy – with commenters either agreeing with or disputing what Fürjesi said – the discussion is newsworthy because many aspects of Tesla ownership back up the idea.

The first one is its year model approach. Most car companies disclose what their cars will have in a given production year and try to be consistent about that. In other words, customers know the equipment and trim levels a 2020 Chevy Bolt presents or a 2019 Hyundai Kona present, for example. They even can determine if a car is a 2019 or a 2020 model due to the changes a model year may present. Tesla cars do not have that.

When the company decides to offer a new feature, it does that all of a sudden. Fans call that continuous improvement. Buyers that lost an important upgrade – such as the HW 3.0 computers instead of the HW 2.5 – are not that positive. In fact, the ones that got the HW 2.5 when Tesla promised all vehicles would have the HW 3.0 are still asking when they will have their computers upgraded.

Elon Musk even promised the Model Y made at Giga Berlin would be the first to have the new body architecture with mega castings and a structural battery. In that sense, it will be completely different from the Model Y made in the US or Shanghai. It will also be a testbed for new technologies. You could call it a prototype, even if it is for sale.

Another thing that approaches Tesla vehicles to prototypes is the “deliver now, fix later” method. Prototypes are run thousands of miles by professional drivers and engineers to ensure defects will not happen in customers' hands.

We were not aware of Tesla testing prototypes on roads until the Model Y. Anyway, it was mostly seen testing in cold weather, probably due to the heat pump. Regardless, the Model Y is one of the vehicles to present the highest number of quality control issues in recent times.

Current Tesla buyers would be working like professional test drivers. The difference is that they do not report the problems to engineering teams but rather to Service Centers. That has increased the waiting lines for repairs and made it difficult to schedule them. If these cars were not treated as prototypes, would Service Centers be as busy?

When Tesla Raj urged people to be smart using Smart Summon, he highlighted that both that feature and Autopilot are under beta testing. That implies that anyone willing to use them will do that at their own risk.

If Tesla cars are also under beta testing as a whole – like prototypes are – that would be another explanation for why the company names warranty repairs as goodwill. Prototypes have no warranty, even if Tesla says its cars do.

Finally, Tesla reportedly eliminated its PR department. If that is confirmed, it could mean it feels it does not owe customers or society any explanation about its product’s issues or complaints. So far, the company still has a press contact page and email addresses allegedly for solving media doubts.

Legacy automakers have a standard answer for questions about prototypes of soon-to-be-available cars: “We do not comment on future products.” Perhaps Tesla has the same approach but forgot to tell everyone it sells prototypes. Has Fürjesi fixed that lapse, or is he wrong? Feel free to comment on that below.