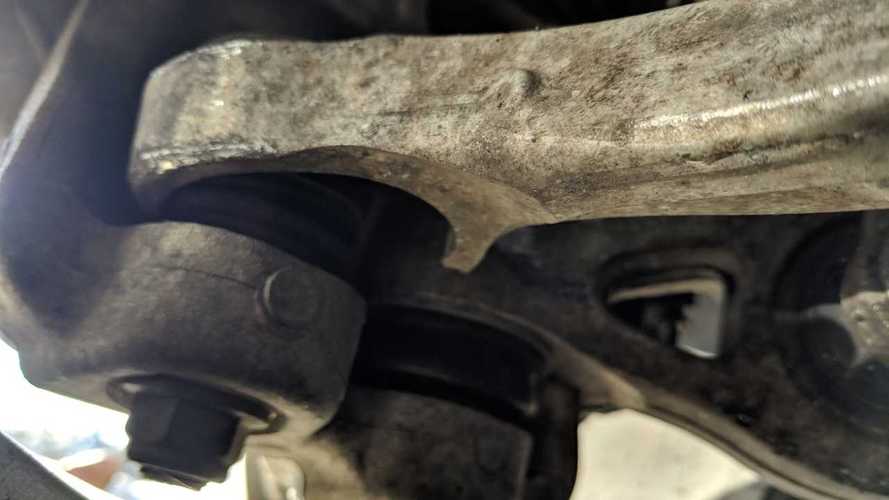 Some got warranty coverage, some didn’t. Some lemoned their cars.

Some people believe that man never landed on the moon. Others think the Earth is flat or that anything about Tesla's issues is FUD (Fear, Uncertainty, and Doubt) – as if the world's most valuable car company was as fragile as it was years ago. Journalism commits to the truth and one of the most evident about Tesla is that its cars are presenting concerning suspension problems. Our readers helped demonstrate that by telling us their stories.

These customers provided the pictures and documents you can see in this article. They also told us how some got warranty coverages, and some didn't. How Tesla replaced the defective parts of some vehicles and also made the failed parts look like no big deal in very similar cases. At least one of them just hopes Tesla will act as it often did in the past.

Tesla issued the SB (Service Bulletin) 17-31-001 on February 10, 2017, related precisely to these components. It states that “some Model S and Model X vehicles may have been manufactured with front suspension fore links that may not meet Tesla strength specifications.”

The document also affirms “the driver can still maintain control of the vehicle, but the tire may contact the wheel arch liner” should the links fail. The correction was to be applied to all Tesla Model S and X units made from January 19, 2016, up to May 25, 2016, if the links failed or if these cars were “scheduled to receive an alignment adjustment.”

The TSB was issued right after the Daily Kanban published an article about problems with the Model S suspension. The investigation started after a TMC Forums thread brought up the situation on April 28, 2016, and it pointed that the issue was on rusted steel ball joints on the suspension, which was subject to another TSB issued on March 16, 2015.

We wrote an article on June 11, 2016, in which Elon Musk said NHTSA had cleared the company from any issues in their cars’ suspensions. A text from Hybrid Cars dated June 14, 2016, said that was not the case: NHTSA was still “in the screening stage,” according to Bryan Thomas, NHTSA Director of Communications at the time.

We never heard how this investigation ended and have asked the NHTSA about that. Regardless, our reader’s statements make it clear that there are many more Tesla vehicles with suspension issues than the company’s TSBs care to admit.

One of the three readers to go anonymous in this article is a long-time Tesla customer. We have his full name, company, and other details that prove that what he told us is true, but cannot disclose that due to professional and personal reasons. We’ll name him just as JN.

He bought a Model S back in 2012 and is now on his third Tesla, a Model X 100D 2017, which he defines as “the worst Tesla” he has ever owned “by far.” His car was not among those that could have fore links that do “not meet Tesla strength specifications.”

“When I first bought the car, I noticed that at hard acceleration, especially going uphill, there was a serious shaking coming from the front suspension. (...) I took the Tesla in twice before I got Tesla to address the issue. First time in, they said they could not replicate the issue, but that there was a known issue with the ‘geometry’ and that ‘shaking on hard acceleration was normal’ and not a thing that needed fixing. The Tesla mechanic actually said it was part of the quirky nature of Teslas, but I responded that neither Model S I owned ever had this problem.”

JN was not satisfied with that explanation.

“Second time in, they replaced the control arms on the front suspension. This was about one year after purchase. The problem continued but was less severe. (...) Third time in, I insisted that a Tesla mechanic come with me in the car so I could show him what I meant. He then told me it was a known issue due to the high torque and forces on uphill acceleration, and they were addressing it in an upcoming fix. He said there was no fix yet available. This was about a year ago. (...) In any event, your report confirms my fears – the control arms cannot handle the torque and are, eventually, failing. Keep digging. Maybe you can shine enough light on this to trigger a recall.”

Our other anonymous reader is JM. He preferred that we protected his identity because “there's a slim chance that sharing this story could make a billionaire upset with me, and no one really needs that in their life.”

This reader owns a CPO 2015 Model S 70D, which now has exactly “58,896 miles on the odometer.” In other words, it is the second one that is not contemplated in Tesla’s TSB. His car’s suspension is among the ones that just broke down. The main picture in this article shows his Tesla.

“In March 2019, the right front lower suspension control arm fractured as I slowly backed out of a parking spot after dropping my kids off at school. My vehicle was towed to a local Tesla dealership for repair. When I went to pick my car up, they said the repair bill was over $600.”

JM was probably relieved his children were not with him when the component failed, but he was not pleased with the bill.

“I asked to see the broken component because it seemed very unlikely that the way the control arm broke could have been the result of anything other than a manufacturing defect or poor component design. The service person said they'd go see what they can do. When they returned they told me they had good news; the broken part was ‘gen 1’ and the replacement part and labor was covered under warranty. I asked if I could still see the broken part, but I was told that I could not: they needed to send it in to be looked at.”

The only Model S owner that accepted to go on the record was Stephen Bailey. He owns the sole car that could be covered by the SB-17-31-001, a 2016 vehicle, but that would imply the technicians would get it fixed for free – or that they should have done that a long time ago. Bailey bought this car when it was new.

“The S was in for inspection, and the tech reported finding cracks in the fore and aft links of the front suspension. But, since the links had not failed (only cracked), repair was refused under warranty. Just normal wear and tear. They reduced their story to ‘slightly cracked’ with no repair recommended at that time. (...) Apparently I have to suffer a suspension failure, and if I live through that, then, I can ask for the warranty to cover the cracked suspension.”

That left him with no choice but to pay for the repair. The good thing is that he will get the replaced parts back.

“I cannot see (myself) driving this car at road speed with cracked suspension parts. I have read of many Tesla owners with similar problems with front end suspension. I am so disappointed in Tesla for being so tight-fisted about fixing the car under warranty. I will get the four suspension parts back this week. (...) Hard to remain a fan after this experience. I do not remember Tesla being this way four years ago. They seemed more interested in doing the right thing, erring on the side of safety and in pleasing the customer.”

Three readers got in touch with us regarding suspension problems on their Model 3s, mostly complaining about the creaks and pops we have already reported not only on the sedan but also on the Model Y.

One of them did not get back to us when we tried to get more information, so we’ll call him just WM. He told InsideEVs his car is heading for a second time to his Tesla Service Center to get the issue fixed.

By coincidence, another reader with the same name initials had a similar story to tell, only more intense, so to speak. William Melikyan went to his SC four times in 1,800 miles before he decided it was enough: he is lemoning the car.

“You can see how new this car is and how many miles it has… And critical bolts were coming off? Not cool at all.”

Melikyan works with manufacturing and told InsideEVs why he thinks Tesla is shooting itself in the foot by delivering so many defective cars.

“In a factory line, when dealing with cars, you only have 15 seconds to install this bolt (for example). The next technician only has 2 minutes to install the windshield. If the lean in 'lean manufacturing' becomes too lean, employees are rushed. They have no choice but to let go and move to the next incoming car. Then it’s the service centers' problem. You can imagine how jam-packed they are.”

Melikyan has good sources inside service centers, and they told him Tesla pays “roughly $15,000 a day for two locations for renting out cars to customers.” It would also be spending a lot with overtime for mechanics, replacing defective parts, labor to fix vehicles that should leave production lines in better shape, and so forth.

“It’s great that Tesla can show it meets quarter sales. But, on the back end, they lose a lot of money. A lot!”

“Prior to the repair the front suspension was rattling when going over bumps and making a creaking noise when turning at low speed.”

Tesla's Suspension Issues Get Terrifying At 200 Km/h On Autobahn

Here we have six customers complaining of suspension issues, some of which were already reported back in 2016, with no action from NHTSA so far. Most of the cars are not included in the TSBs that recognized these problems.

Either the service bulletins apply to way more cars than Tesla mentioned before, or the company realized these parts do not stand the weight or torque demands of electric vehicles. Whatever the explanation is, we wonder if this is not something a recall would have to solve. We’re asking about that and will let you know as soon as possible.