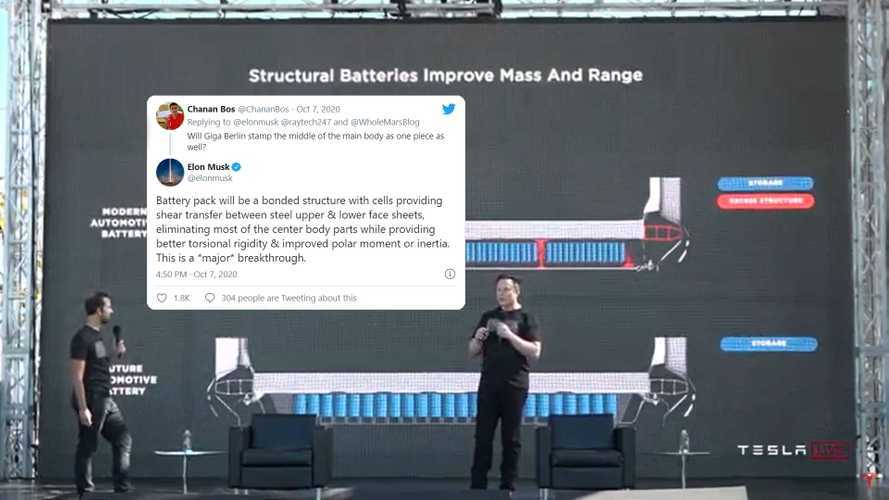 Rich Benoit built his YouTube channel fixing salvaged Teslas. It was not difficult to find affordable EVs that could be saved for cheap. Some just had scratches in their battery packs, but insurance companies thought replacing them was more expensive than paying for new cars. That explains why concerns emerged when Tesla decided to make the battery pack a structural part of its vehicles. Well, Elon Musk addressed that on Twitter.

Although he did not get into details about how easy such a car would be to repair, he gave his followers some general ideas about how that should work.

If you are not familiar with what we are talking about, Elon Musk said on Tesla Battery Day that the company’s future vehicles would have a completely new structure. Instead of the regular body-in-white architecture we have nowadays, its platform would consist of three parts: two mega castings – one for the rear, one for the front – and a structural battery placed between them.

As fantastic as that may seem in speeding up manufacturing, it also implies that a crash that affects any of these parts will demand replacing them. If the battery pack presents any issues, how do you replace it if it is part of the car’s structure?

Some followers asked Musk about that. Here’s his answer to a question about a rear-end crash.

Not everyone was happy with the solution Musk presented.

A little earlier, another follower asked him how the structural battery would be made.

Some terms need to be clarified here. Stampings and castings are very different processes. Stamping transforms a plain sheet of metal into a body panel by cutting and bending it under extreme pressure. Casting makes a car component with a mold filled with molten alloy.

Considering Musk speaks about steel upper and lower face sheets, the structure in which the battery pack will help will probably be made from stamped parts. He does not clarify how many will be necessary, but there’s no way to stamp such a big panel in one piece. It would not be rigid enough.

When Musk said the battery pack would provide “shear transfer,” he went after construction terminology. Shear walls provide lateral strength and stiffness to buildings. If you think of the structural battery pack as such, the bonded battery pack probably works like these walls. Check the video below to understand that better.

To make it even simpler, shear forces come from road loads, such as bumps, accelerating, turning, etc. These forces are fed to the wheels, then from the wheels to the suspension, from the suspension to the chassis, and so forth. They need to be spread through the car efficiently to give it the feel that it is solid.

Imagine a shoebox with thin walls. If you press one of its sides, it will easily bend there. If it were a wood box or any other more rigid object, it would just be pushed entirely. That happens because the force put there was transferred equally to all its structure.

If that is the case, we could see fewer Tesla vehicles written off due to damages there. At the same time, how would the battery pack be structural if that was the case?

InsideEVs talked to engineers that prefer not to identify themselves, and they said they have other concerns. Will these batteries resist these shear forces and still be able to work without structural damages? How strong would they need to be to ensure both functions?

They are also worried about Musk’s repair strategy. If a crash affects the mega castings, it may be technically possible to replace them, but will it make financial sense? Or would it cost more than just paying for a new car altogether? That may make insurance prices for Tesla cars skyrocket – and they are not cheap already.

On the other hand, the same engineers think that, if Tesla manages to make this arrangement work – with respect to serviceability and weight reduction – it would be a very elegant solution. The German Model Y may tell us more about that.

Apart from the engineering questions involved, there is also an environmental aspect to consider. If these cars are written off after mild accidents, they will make junkyard even busier than they are today. We would need a platoon of Rich Benoits fixing them to avoid the waste and the need for more natural resources to build new ones. Sadly, even the man himself already gave up doing that.