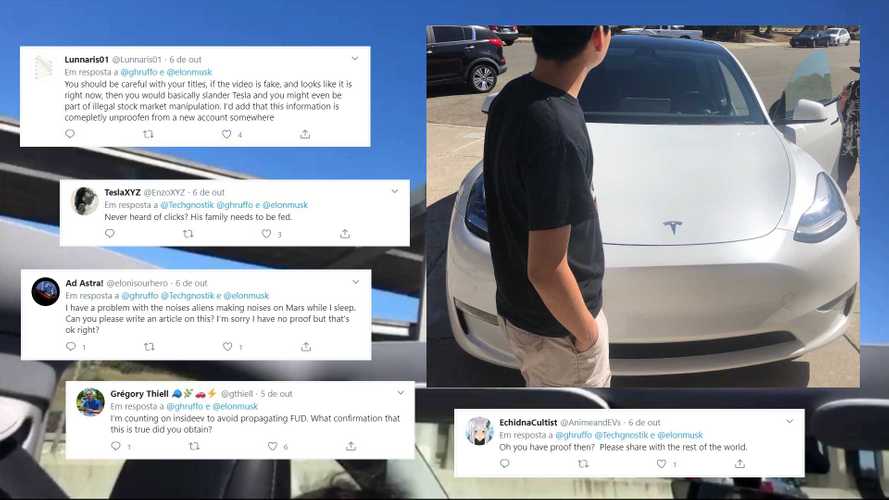 Buying a car and losing its roof hours after delivery can be traumatic for anyone – especially if it is not even a convertible. If it is a Tesla, it can be worse. Its supporters are sure to attack any attempt to report the problem as FUD, short-selling, sabotage, or other deliberate intentions to harm Tesla’s “mission.” What they can’t conceive is that they can be in front of a regular customer with a real problem. In this case, Nathaniel Chien’s family.

Chien was the man behind the Reddit thread that reported the situation. On that very discussion, he said he would create a Twitter account to try to talk to Elon Musk. Tesla fans saw the recent account as part of a plot to taint the company’s image.

When Chien got to Twitter, he was confronted with accusations of faking the video with CGI. People also said he photoshopped the only picture of the car he could make. It was right after giving it back to the Dublin Tesla Service Center, where his family picked it up. Other similar insinuations are also on Reddit or Twitter. InsideEVs was also accused of having no evidence to publish the story, as you will see in this article.

Chien was kind enough to tell us what happened with his true identity. Although it was not crucial to check how real everything was, it is always something people fond of conspiracy theories could bring up as a sign that it was all invented.

His original Reddit thread was edited with these words:

“Also, I know the photos are of low quality. I basically never post anything, so I didn't even think about getting proof until the last minute, and I don't have anything better. You can believe what you want, but there should be some news articles coming out soon that prove things more definitively.”

This is one of them.

The decision to buy the Model Y

We started the conversation by asking Chien what made him choose a Model Y.

“Ultimately, it was my mom's decision to get the Tesla, but I think my dad had a big part in convincing her. He'd been researching and watching Tesla YouTube videos for a while before we made the decision. It was between a Tesla and a Lexus, so we were just looking for any nice car, not just an electric one.”

Chien’s father, Walter, drove a Tesla last week and “seemed pretty happy with it,” impressed with “the quality of life features and the general high-techness of it all.”

Considering the multiple complaints about build quality the Model Y has received so far, we asked Chien if the roof with SpaceX ambitions was the only problem the car presented.

“We did see some issues with fit and finish, an uneven gap on the hood panel but seemingly nothing too big. We were planning on bringing it back to get serviced a week later. We drove from Dublin to Hayward to get lunch and look at a property that my parents were renovating.”

In the video, we can see that a woman is driving the car. It was Chien’s mother.

“We were buying the car under my dad's name, but it was actually going to be used mostly by my mom. My mom was with us at the dealership. She was actually the one driving. It was when we were driving back from Hayward that the roof fell off. We were only about 15 minutes away from the dealership and could bring it back easily.”

Although they spent only “a couple of hours” with their Model Y, the Chien family was happy about the purchase.

“Both my parents liked the car at first, they thought it drove smoothly and were excited by the touchscreen controls. My dad was having fun trying out the Autopilot and I was enjoying checking out all of the entertainment options.”

The bad experience the Chien family had can not only lose Tesla a new customer for good: it may also get another combustion-engined car sold really soon.

“The possibility of still getting a Tesla hasn't been completely ruled out. We're pretty confident that they wouldn't give us a faulty car twice in a row, and in my view one manufacturing error (no matter how big) doesn't change the fact that most cars will be high quality. But if my parents decide they don't feel comfortable with the brand anymore, they're probably going to get a Lexus.”

If what the car offered was shocking – in a bad sense – Tesla supporters did not make it any easier. Luckily, that would not have an impact on their decision to give the brand another chance.

“My experience with the Tesla community hasn't exactly been positive, but I don't think that should impact your choice of car.  If you want a Tesla, you should get a Tesla. You don't have to become part of ‘the club’ just because you own one.”

In fact, Chien repeated to us what he wrote on Reddit, giving us the impression he almost gets the doubts raised by his video and the only picture he managed to get after the incident – but not quite.

“I understand that the photos aren't high quality, but I can't imagine what reason somebody would have to fake this. It's honestly been pretty stressful explaining everything and trying to get people to believe me. I just ask for the benefit of the doubt.”

What Chien raised is something that deserves to be asked: why would anyone bother to invent such a story? Why would they insist on getting an answer from Elon Musk? Why would they tell the press their real names, exposing themselves, if it was not true?

In our talk with Chien, something crucial also crossed our minds. Curiously, the Tesla supporters that gave him a hard time completely missed this: Tesla quickly denies accusations it believes to be unfair, even if it does not have a PR department anymore. For the record, it still says it does.

That’s what happened with alleged SUA (Sudden Unintended Acceleration) situations with its cars. If Chien’s story is false, why doesn’t Tesla publicly deny it? We asked Chien what he and his family would do if that were the case.

“I really can't imagine that they would deny it, but if they did I guess I would have to try to get more definitive proof any way I could – maybe calling CHP to try to confirm what we reported and that they found the roof. Or calling the Dublin dealership directly to confront them. I hope it doesn't come to that.”

We have contacted CHP (California Highway Patrol) and will update this article when we get an answer. Not because of any doubts about Chien’s report, but to discover if the fugitive glass roof made any victims apart from the family that bought this faulty Model Y.

Our final question to Chien was what he would recommend Tesla did to prevent other new customers like him to have such a bizarre experience.

“Making sure that the roofs are glued on would be a good start, but I think improvements in quality control, in general, would go a long way. Pretty much the only doubt we had when deciding whether to get a Tesla came from the horror stories about poor build quality and parts falling off. Solid quality assurance would have a big impact on confidence.”

Will Tesla listen to Chien? For its own sake, it would better do that. Otherwise, it may end up selling its cars solely to the noisy little audience that thinks Tesla can do no wrong. Other customers, like the Chien family, are not so sure anymore.