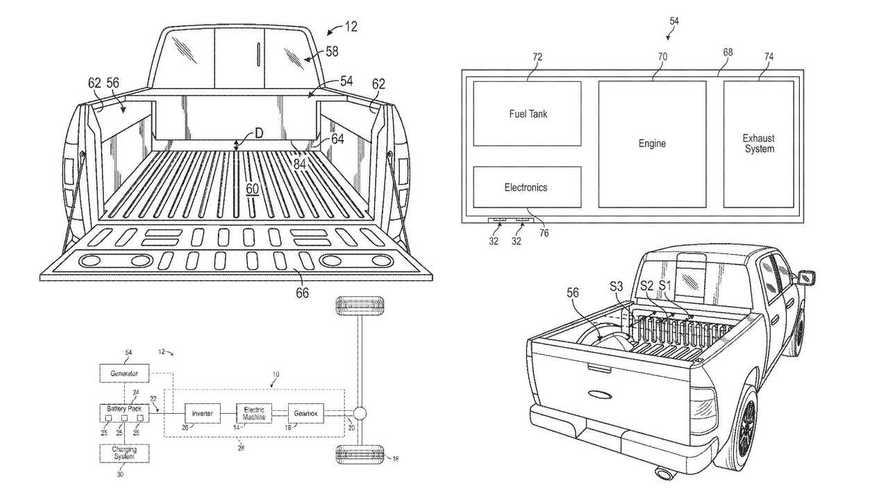 It is meant to work as a range-extending generator.

Would electric car owners feel ok to convert their cars temporarily into PHEVs? The reactions to the Obrist Mark II prototype show this is a controversial subject. Yet, it may one day become a removable reality if Ford turns the patent drawings above into a real F-150 EV feature. According to the idea, the electric pickup truck can have a generator disguises as a toolbox.

The patent does not get into the specifics of the engine that could power such a generator, but it seems none of the current Ford engines would fit into such a toolbox. The idea is to make it removable and as small as possible in order not to kill truck bed space. It even sits above the truck bed floor, allowing for more room below it to carry stuff.

The toolbox generator would contain not only the small gas engine but also its fuel tank, the exhaust system, and all the electronic components to manage the ICE and the electricity distribution.

Ford’s idea predicts both a female connector on the generator and a male connector. Choosing either one will depend mostly on what the company decides to put in the electric pickup truck.

The toolbox generator will slide along the walls of the truck bed with the help of locating studs. Making it small enough will also influence how removable the whole equipment is. If it is too heavy, that will not be an easy operation.

Apart from powering the car either in series or in parallel with the battery pack, the toolbox generator can also deliver energy to tools and other equipment should the operator prefer to spare battery pack charge by burning fuel.

If such a feature ends up in a Ford F-150 EV, we wonder if it would be a standard feature or an option. If it is something like an accessory, how much would it cost? Wouldn’t it be prone to be stolen if it is too expensive?

Curiously, we know of a company that developed an engine that is small enough to fit such a toolbox arrangement: Obrist. It also has the advantage of producing “zero vibration.” Ford and the Austrian company may have a lot to talk about.

Sources: PatentSwarm via The Drive