What Was It Like To Attend Tesla's Battery Day In Person? 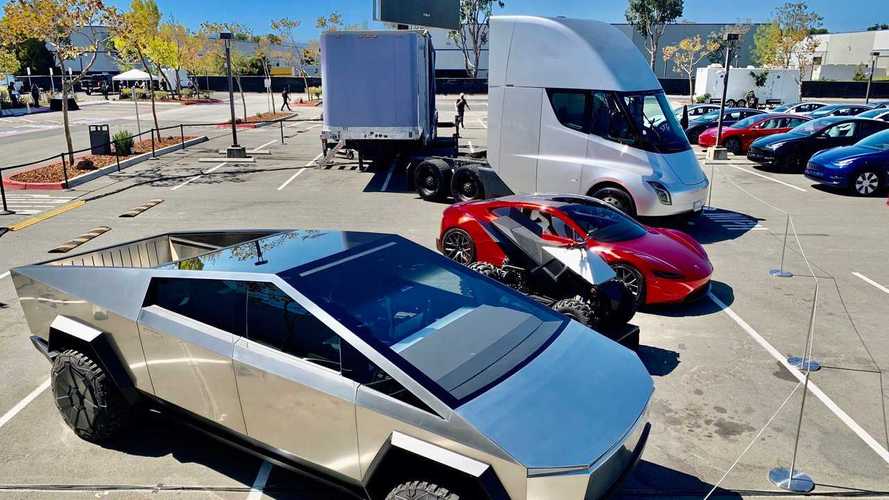 Only about 250 people received a 'golden ticket' to attend, and I was fortunate to get one.

The excitement was palpable the morning of Tesla's Battery Day. Shareholders and superfans alike began to line up at 10 AM outside a Tesla facility near the company's factory in Fremont, California. Only about 250 people received a "golden ticket" to attend and I was fortunate enough to be one of the lucky few who got one.

Attending a Tesla event is always eye-opening. Getting to share in the excitement and passion within the Tesla community is always undeniable proof that the company is poised for growth.

After social distancing in line, we went to our table to check in and we were assigned our car number. That’s right! Not a seat number, a CAR number. We were very confused, but eventually, we uncovered what was going on.

Looking towards the stage, on one side was Tesla's S3XY vehicle line-up. But what we saw on the other side had us completely starstruck — a gleaming Cybertruck, ATV, Roadster, and Semi (acronym: CARS) on display.

So where would we sit? Well, we were all greeted by a parking lot full of Teslas. Due to the pandemic and social distancing requirements, Tesla came up with an unconventional solution to pull off the in-person event.

Above: Tesla's 'drive-in movie' arrangement for the event (Source: Tesla)

Attendees sat inside Model Y and Model 3 vehicles and watched the event from inside these assigned cars in order to experience a Tesla "drive-in movie" configuration. Audio was piped into the cars and slides were showcased on both the Tesla in-car screens and outside projectors.

The event kicked off with the shareholder meeting. With all the anticipation and build-up for Battery Day, this preliminary part of the presentation wasn't all that exciting. At one point, there was a chance to vote for policy changes.

When the motion came for Tesla to adopt advertising, I could swear I heard booing from other cars. Ultimately, that motion failed. It seems investors and owners realize that the best way to sell Tesla is via word-of-mouth. Commercials are NOT the answer.

Above: A chance to catch up with John Stringer of Tesla Owners Club Silicon Valley (Photo: Eli Burton)

The shareholder meeting ended and we were given a short break. We all jumped out of our cars to take more photos and catch up with friends. If we got more than six feet apart for a few seconds Tesla staff jumped in to remind us to socially distance which was completely understandable.

To the blast of car horns instead of claps, Elon Musk returned to the stage for Battery Day. Overall, it was an extremely comprehensive presentation where Tesla laid out the framework for their many innovations contributing to what's ultimately going to be a revolutionary new battery.

Afterward, Elon opened it up to Q&A. This was my moment. I realized that no one seemed prepared for this in the audience so I quickly threw on my Don’t Panic mask and jumped out of the car and waved my hand. I was lucky enough to be in the front row — just 50 or so feet from the stage. Tesla staff quickly spotted me and charged over with an extended boom mic in hand.

All of the adrenaline in my body was overwhelming as I realized I had less than 10 seconds to come up with my question. I decided to ask about the one feature that is most important to me (and my lifestyle) as it relates to the company's upcoming Cybertruck.

After the event, we went back to our Tesla Geeks hotel room and marveled at what we'd just seen. Over some food and drinks, something dawned on us. Elon Musk just declared the end of the ICE era. Without a doubt, Battery Day marked a milestone. At today's landmark event, Tesla announced a raft of innovations, which will spark an exciting EV revolution in the coming decade.

Guest Contributor: Eli Burton is proud to be friends with Real Life Starman. He is also President and Founder of the My Tesla Adventure Tesla Owner Club. Eli is also co-host of the Tesla Geeks Show podcast and creator of The Adventures of Starman comic book series.