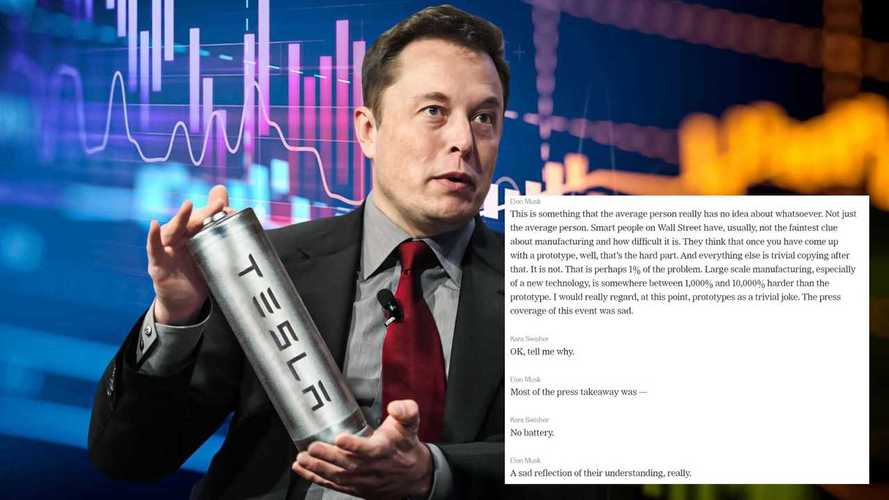 “Most of the press takeaway was a sad reflection of their understanding, really.”

Call this irony at its finest: Elon Musk and Tesla have a bad – if even existent – relationship with the press. Tesla Battery Day did not have the presence of any media member to ask questions about what was revealed there. Yet, Musk did not feel embarrassed to say "the press coverage of this event was sad" to Kara Swisher.

She managed to record a podcast with him, which is quite an accomplishment. Her new podcast with The New York Times is called Sway, and it has the purpose of interviewing powerful and influential people. Musk's remarks on the Tesla Battery Day coverage happened right at the beginning of that podcast episode.

It is not clear how the conversation started or when it got to the event. In fact, it seemed to be about manufacturing and how "the average person" and "smart people on Wall Street" do not have "the faintest clue" on how complex it is. The reference to Wall Street must be about how Tesla Battery Day backfired, even if Tesla shares are currently recovering.

That was when Musk referred to the press coverage. He also said it was "a sad reflection of their understanding," implying the press did not get it. Considering he also said Bill Gates does not "have a clue" on electric trucks, it comes as no surprise that he thinks the press or Wall Street analysts lacks the intelligence to grasp what he is talking about.

Unfortunately, Swisher seemed to confirm part of the media did not understand the event when she suggested Tesla Battery Day had "no battery." It did, and more than one. Musk presented the 4680 cells – even if they are not readily available – and revealed the $25,000 Tesla car would have LFP (lithium iron phosphate) batteries. Musk also said prototypes are running with 4680 cells since May 2020 – we still did not have a date for when it started.

At this point, the Tesla CEO revealed some frustration with the talk. He asked her: "Why are we having this — what is the point of this podcast?" She asked him about where he wanted to get with batteries, and he repeated the old speech that we need to produce "a truly almost unimaginably vast number of cells" because "sustainable energy is primarily solar and wind."

The conversation then moved into sustainability, politics, and other subjects. Still, the central irony here is how Musk expected to have a different outcome if Tesla is unwilling to talk to the press. It is like denying a cook all the ingredients he needs and complaining about the quality of the food.

Either he and his company trust the press – or at least part of it – and grant it the means for comprehensive coverage, or they don't and hold no expectations about its work. Since the latter seems to be the case here, whatever comes from the media should be neither sad nor fortunate. Tesla and Musk should see it as something as irrelevant as the questions the company refuses to answer.

Some reporters decided to comment on Musk's remarks, such as Dana Hull.

Regardless of what journalists believe or want, they are not doing their jobs if they do not ask the necessary questions. Being soft on people and companies they admire and harsh on the ones they don't makes them part of PR teams, not journalism companies. As somebody put it (not George Orwell, apparently), "news is what someone does not want you to print. All the rest is advertising."

Lora Kolodny used sarcasm to show how that works in the tweet below.

If Tesla Battery Day did not get the press coverage Musk expected, why didn't he and his company provide a Q&A section with journalists they respect and believe are intelligent enough to understand the message? Why didn't they try to "explain it for them," as Swisher suggested? What is not productive is stating that, "as usual, we still don't get it," as the podcast presenter summed up the situation – nor getting frustrated if some really don't.