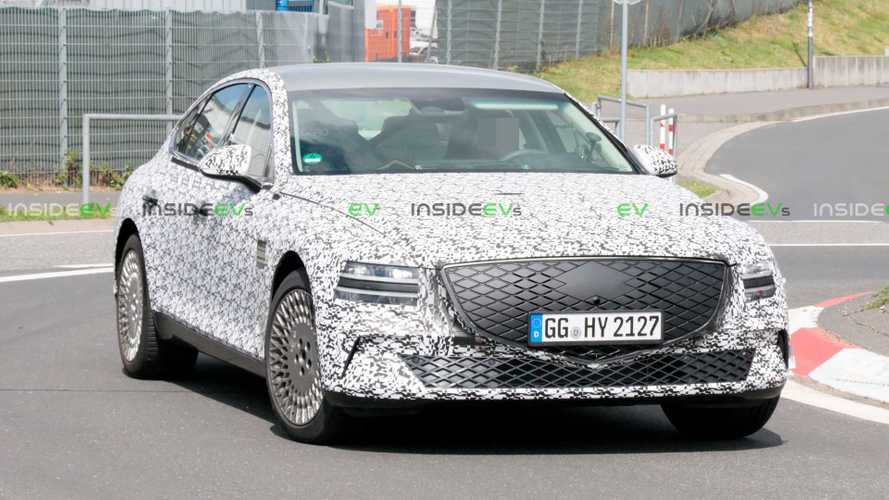 Genesis is one of the youngest automotive brands, yet it’s already developing its own EV sedan to fight the Germans and Americans.

Not long after showing you photos of the first Genesis-badged electric crossover, we now have shots of the company’s first electric sedan, the eG80. It is, as you would imagine, an all-electric version of the recent G80 three-box sedan, a model that is aimed at the likes of the BMW 5 Series, Mercedes-Benz E-Class or Lexus GS.

The all-electric eG80 will be a more or less direct rival to the Mercedes-Benz EQE, BMW i4 and even the king of the segment, the Tesla Model S; it might also rival vehicles from one size class above. It is said to have a range of up to 310 miles (500 km), although we don’t know what capacity battery pack will provide it.

We also don’t know what kind of performance numbers it will put down, although the minimum requirement in the segment is around 300 horsepower, so we expect it to have at least about that much. And since our spies caught the eG80 prototype testing around the Nurburgring in Germany, it’s clear Genesis will want it to be a sporty feeling sedan.

Regarding its design, we don't expect it to differ too much from that of the regular ICE G80. This particular prototype looks identical except for the grille (which is fully closed off) and the absence of tailpipes under the rear bumper.

This is literally all we know about it at this point, and according to information posted on TheKoreanCarBlog, it will reportedly also have Level 3 autonomous driving capability. It is believed that the eG80 will debut sometime in 2021 and go on sale in 2022, roughly at the same time as the smaller eGV70 pure-electric SUV (the EV version of the GV70).