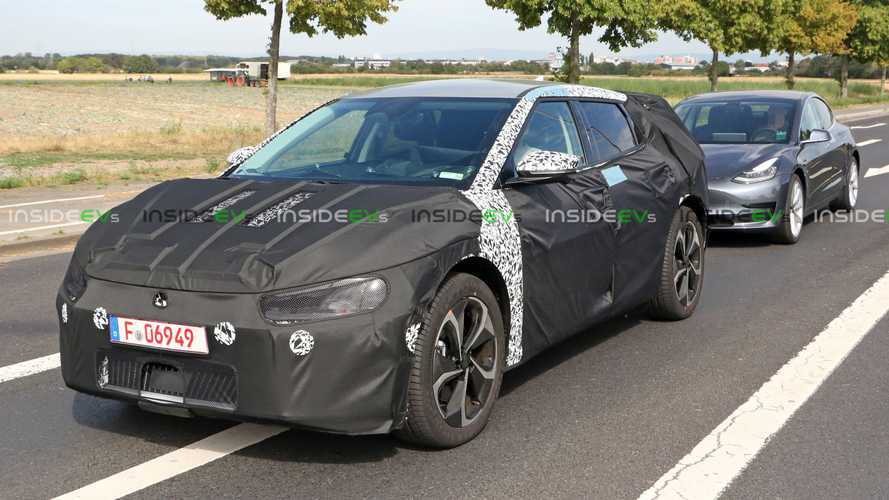 The Korean automaker may be benchmarking its future EV against the talented Model 3 (since the Model Y isn’t available in Europe yet).

After being spied last week for the first time, we have a fresh batch of photos of Kia’s upcoming electric crossover. This time, the camouflaged prototype was spotted in the company of a Tesla Model 3, which we imagine was there for benchmarking purposes.

Regarding the design of this new Kia EV, we initially though it was going to be a more toned down version of the Imagine by Kia concept. However, as our spies correctly point out, it looks like it’s going to feature a combination of design elements from the Imagine study, as well as the even bolder Futuron concept.

We don’t know exactly what cues it’s going to borrow from either, but we can already tell that it’s going to be a sleek and quite low-slung coupe crossover. There are also rumors that this vehicle is going to have supercar-like acceleration, so it could even be able to sprint to sixty in under 3 seconds.

This is going to be one bold looking EV

Kia Presents Its Future With The Futuron Electric SUV Concept

Regarding its range, it is believed it could be around the 300 miles (483 km) mark, and it may even have an 800-Volt architecture that could allow for ultra fast charging (up to 350 kW, if it’s anything like the Porsche Taycan). However, we don’t yet know the size of its battery pack, but we do know it’s going to ride on a bespoke electric vehicle platform and it will become Kia’s first dedicated EV; expect to see it debut sometime in 2021.