Tesla: "Later this year, we will be building three factories on three continents simultaneously."

The second quarter of 2020 is already behind us so let's check out the manufacturing infrastructure of the world's largest electric car maker Tesla.

The company is expanding its plants, as well as building new, which should increase the output up to around 800,000 annually this year. Total production and sales in 2020 should exceed 500,000, despite the COVID-19 lockdown in Q1/Q2.

"We believe the progress we made in the first half of this year has positioned us for a successful second half of 2020.Production output of our existing facilities continues to improve to meet demand, and we are adding more capacity. Later this year, we will be building three factories on three continents simultaneously."

Tesla's Fremont factory was closed for nearly half of the quarter according to Tesla, but the plant is already making Model Y at full speed and later this year the total output of Model 3/Model Y should reach 500,000 annually.

"Although the Model Y production line was operating for about four months in the first half of 2020 due to shutdowns, we exited Q2 with Model Y production running at installed capacity. This ramp was significantly faster than our initial Model 3 ramp, which took over nine months to reach the same weekly rate. We are installing additional machinery at the Fremont Factory, which is expected to increase total Model 3 / Model Y capacity from 400,000 to 500,000 units per year."

As we can see in the new photos, Tesla is really well advanced in the installation of new manufacturing equipment for the Model Y, including some serious, special machines, bigger than a house.

"Construction for Model Y lines in the Shanghai factory is progressing as planned, with first deliveries expected in 2021."

Tesla Gigafactory 4, under construction in Grünheide near Berlin in Germany, should be ready for the production of Model Y in 2021. Elon Musk recently shared the rendering of the factory.

"In Germany, one of our biggest European markets, Gigafactory Berlin construction continues to progress. As we build new factories, we continue to iterate on the factory and product design to improve efficiency, cost and technology. We are implementing further structural improvements based on our learnings from prior factories."

The next big project will be a new gigafactory in the U.S., as Tesla officially selected Austin, Texas as the location for the plant. It will produce Cybertruck, Model Y, Model 3 and Semi. The Tesla Semi should enter the market (finally) in 2021.

"The next US Gigafactory site has been selected and preparations are underway. Tesla Semi deliveries will also begin in 2021. We continue to significantly invest in our product roadmap." 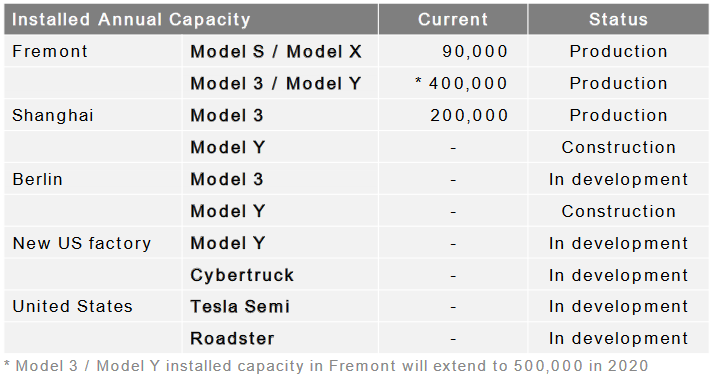