Netherlands: Plug-In Electric Car Sales In May 2020 Down, But Market Share Up

The market is down, but the market share of 14% is quite high.

Passenger car registrations in the Netherlands were seriously affected by the COVID-19 slowdown and in May the overall numbers are down 53%.

The plug-in car sales also are down, but not that much - by 28% year-over-year to 2,023 according to EV Sales Blog, which translated to an improved market share of 14%.

Things should recover later this year as new incentives were announced (more on that in a separate story).

Plug-in electric car sales in the Netherlands – May 2020

Volkswagen e-Golf turned out to be the top-selling model for the month of May (221 registrations), followed by the usually strong Kia Niro EV (217) and Hyundai Kona Electric (212).

Tesla Model 3 remains the top model of the year (155 in May and 1,974 YTD) although the advantage over the #2 Niro EV is not particularly high.

As we can see below, the market is dominated by the all-electric cars, but it seems that SUV/crossover plug-in hybrids are also quite popular, including the new BMW X5 xDrive45e and Ford Kuga PHEV (Ford Escape PHEV in U.S.). 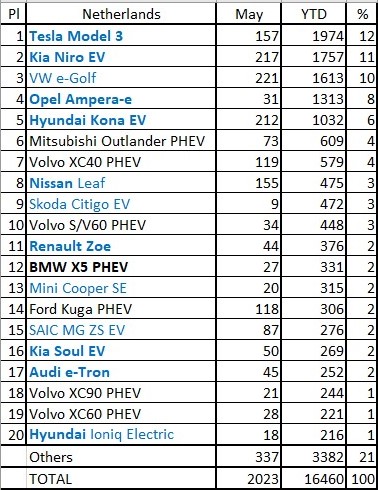