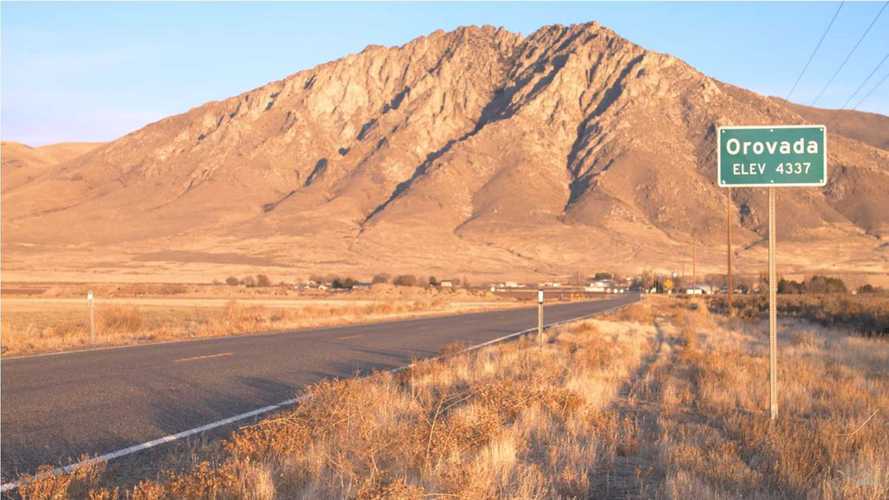 The demand for lithium is growing quickly, and Tesla may have another edge.

What To Expect At Tesla's Battery And Powertrain Investor Day

No, lithium isn’t going to become “the new oil,” regardless of what the pandering pundits of the popular press say (it’s a raw material, not a fuel, and it’s one of the most abundant elements on Earth). However, there’s no question that demand for the light white stuff is growing quickly, and that much of the current supply comes from outside the US. Tesla is believed to import much of the lithium it uses from Australia and South America. There are strong economic and environmental reasons to develop more domestic sources.

Above: A look at Tesla's Gigafactory 1 in Nevada (Source: Tesla)

Fortunately, just a couple hundred miles north of Gigafactory 1, near the Oregon/Nevada border, there’s an area that some are calling Lithium Valley, which could contain a huge and easily exploitable trove of lithium. (This isn’t mere serendipity—one of the reasons Tesla chose Nevada as the site of the Gigafactory was the proximity to potential sources of lithium and other minerals.)

In a recent article and accompanying video, NBCLX Storyteller Chase Cain takes us to the site of an ancient volcano, where a Canadian mining company has identified what it says is the largest lithium deposit in North America. Volcanologist Dr. Thomas Benson confirmed the motherlode of lithium. His company, Lithium Americas, is now seeking a permit from the federal government to mine lithium in the area known as Thacker Pass, near the town of Orovada (Oregon, Nevada, get it?).

Lithium Americas says its proposed mine could supply the entire US demand for lithium through 2068 or longer. Furthermore, the lithium could be extracted here with less environmental damage than at other sites. In Thacker Pass, the mineral-rich pay dirt is right on the surface, and lithium can be separated from the ore using a water-based process. Lithium mines in South America, which extract the element from salt flats, have been criticized for high water consumption and other negative impacts.

Lithium Americas President Alexi Zawadski told NBC that the company’s process needs comparatively small amounts of water, and that it can be carbon-neutral. “We recycle a lot of our water. We actually generate carbon-free energy from our process, and we’ll have an excess that we’ll sell to the grid.”

Above: One of the world’s largest lithium deposits is located in Nevada, close to Tesla's Gigafactory (YouTube: NBCLX)

Dr. Nathan Manser, an expert in geology and mining from Michigan Technological University, agreed that Lithium Americas’ process appears to be an improvement over existing methods. “In terms of comparison to existing lithium salt brine operations, this project will benefit from an economy of scale effect that could allow it to produce lithium in a greener manner than is currently being done.”

Will the government approve the mining operation? Establishing domestic supplies of lithium is an idea that has support on both sides of the aisle. The administration included lithium on a recently-compiled list of 35 “critical minerals” necessary for national security. Republican Senator Lisa Murkowski of Alaska recently spoke on the issue of reducing dependence on foreign sources of critical minerals. And Democratic Senator Elizabeth Warren, who generally opposes extractive industries on federal land, can see making exceptions for minerals that support renewable energy. “If we need to make exceptions because there are specific minerals that we’ve got to have access to, then we locate those…and we do it, not in a way that just is about the profits of giant industries, but in a way that is sustainable for the environment.”

According to NBC, officials at the Department of the Interior have suggested that the Thacker Pass lithium mine could win approval later this year, and that mining operations could begin by 2022.