Many automakers get cameos in animated series, but Tesla has a special status among them.

Automakers are often used in animated series to highlight a certain aspect of a character's life or to add extra depth to a certain situation. One example that springs to mind is Andy Anderson’s Rambler from the 1990s TV show ‘Life With Louie’ or the Toyota AE86 driven by Takumi Fujiwara and used to deliver tofu in ‘Initial D.’

However, Tesla isn’t like other automakers, and its portrayal in animated series (which are usually comedies at heart that often resort to gross exaggerations to get their message across) is different compared to traditional automakers. In fact, the way Tesla is shown in these series suggests that it has a special status; it’s a disruptor of our understanding of traditional automakers and this has both positive and negative connotations.

Each time a Tesla has appeared in an animated series, the creators’ idea was to drive home a specific point, and this would not have been possible if Tesla didn’t have the notoriety it has today. And the image of Tesla is intrinsically linked to that of its founder, Elon Musk, who often has cameos alongside cartoon portrayal of his cars (and he even voices some of them himself). Musk certainly shows he has a sense of humor and he clearly doesn’t shy away from making fun of himself, his companies and his ideas.

Please note that some of the videos embedded below are not safe for work, although you're probably reading this at home as COVID-19 continues to affect the world.

Both Tesla and Musk make an appearance in the final episode of the twentieth season. The episode is called ‘The End of Serialization as We Know It’ and the gist of the plot revolves around the four main protagonists’ visit to the SpaceX facility in California where Cartman tries to convince the staff there that colonizing mars will lead to the enslavement of males by females.

Elon also made a previous appearance on the show, in the fourth episode of the eighteenth season. Here, he’s voiced by one of the show’s creators, Matt Stone, and he drives a Model S with a big Tesla tower sticking out of the back. His help is enlisted by Nathan and Mimsy (the episode’s villain and his idiot sidekick) who plan to stop Handicar, a (parody of a) ride hailing service and it all leads to... Wacky Races.

The Model S also appears in 'World War Zimmerman,' the third episode of the seventeenth season. Oh, and if you like all of this, then you might want to check out the second episode of the tenth season called 'Smug Alert' which focuses on the smug attitude of people who drive hybrids towards those that don't.

Elon Musk again actively participates in the creation of an entire episode, voicing the character of Elon Tusk in ‘One Crew Over the Crewcoo's Morty.’ It is the third episode in the show’s fourth season in which the two protagonists travel to an alternate reality where people (Elon included) have tusks. In this reality, the car company that he runs is called Tuskla, but the episode doesn’t really put an emphasis on the cars.

The Simpsons dedicate an entire episode to Musk, specifically the twelfth episode of the twenty-sixth season which is called ‘The Musk Who Fell to Earth.’ In this episode, Elon lands a spacecraft in the Simpsons’ yard and says he has arrived looking for inspiration.

He then travels with Homer from home to his workplace at the Springfield power plant, and he draws inspiration from the random and seemingly mindless things he says. Musk discovers that he can actually use Homer’s ideas as basis for his own inventions. We won’t spoil the episode, but at the end he departs aboard the same spacecraft he came in.

Aside from this episode centered around Musk, the Simpsons often feature Tesla cars too, without mentioning the company’s founder. A Model S, for instance, appears in the fifteenth episode of season twenty-six, a first-gen Roadster is one of the cars in the parking lot outside the U.S. Federal Court in episode nine of the same season.

In the more recent thirtieth season, episode eight features Krusty the clown who uses the Tesla’s Autopilot feature to drive alongside Homer’s car in an attempt to strangle him.

The Netflix hit animated series Bojack Horseman also features a Tesla as the main character’s ride for much of the show. Bojack doesn’t have the car from the very beginning, but he treats himself to it after being nominated for an Oscar and it keeps appearing all throughout the show afterward.

The strange thing about this particular Tesla is that it’s a four-door convertible Model S finished in yellow. No mention is made regarding its look, but in case you were wondering what a drop-top Model S might look like, then this car might answer your question. He backs it into his pool at one point, but doesn’t get electrocuted in the process, which may or may not be accurate.

Mike Tyson Mysteries is a show made for Adult Swim and it features, as you might imagine, the world renowned former professional boxer. And as the series’ title suggests, he solves mysteries in a similar manner to what you may have seen in Scooby-Doo! or Jonny Quest; it’s a lesser known series, but it seems to be scoring quite well with critics.

This show made our list because it features a Tesla in the twentieth (last) episode of the third season, which is called ‘The Pigeon Has Come Home to Roost.’ In said episode, the main protagonists’ van is chased by an unbranded Tesla Model S-like vehicle around a canyon road.

Elon Musk is also mentioned in the first season’s third episode, but he’s never shown. In this episode, Mike steals his rocket in an attempt to reach space. 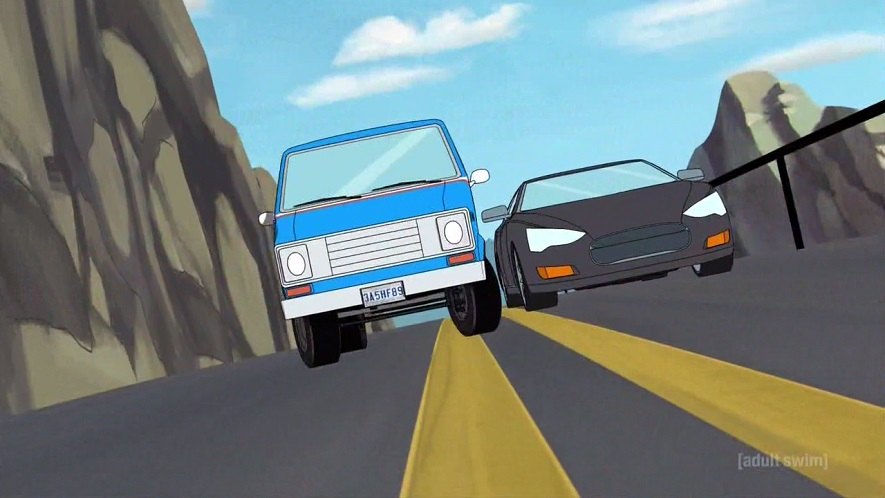 The only Tesla Model X shown in any animated series is present in American Dad. It looks like it’s an early prototype Model X and it doesn’t have a particularly happy fate - an alligator lands on it and wrecks its roof; those Falcon Wing doors definitely won’t work after that.

Those who posted about this brief Model X appearance in American Dad say the car is present in the ninth episode of the twelfth season of the show. However, I watched most of that episode and I did not see it - but there is a screenshot to prove it is in the show, just not in that particular episode, and since it’s modeled off the early prototype, it’s probably an older episode. In this case the fact that the car is a Tesla doesn't appear to carry any major significance. 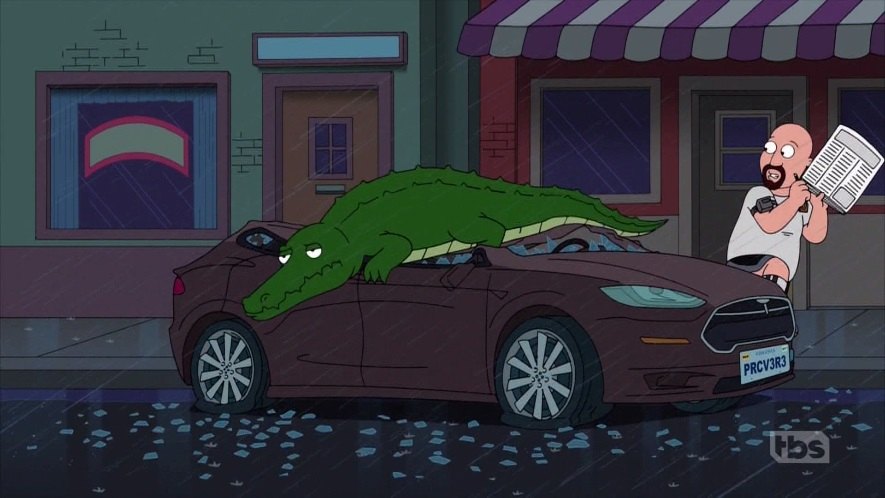 Last but not least is the appearance of a Model S driven by Elon Musk in the popular raunchy Netflix-exclusive animated series Paradise PD. This show tells the tales of some... not very good cops who are either incompetent or not very well-intentioned in their efforts to fight crime.

Elon is shown driving a Model S in the sixth episode of the first season, and just like in the Simpsons, the scene focuses on how the Autopilot semi-autonomous driving function can be misused. The scene is a bit graphic and certainly not safe for work, but you can check it out in the video posted below and keep in mind its goal is clearly to raise awareness about the dangers of being too reliant on Autopilot.

Did we miss anything?

If you’re aware of either an Elon Musk cameo or a Tesla being in an animated series and it’s not in the above list, then let us know and we will add it. This article is the definitive guide to Elon Musk and Tesla in TV animations and we want it to have all the information available.