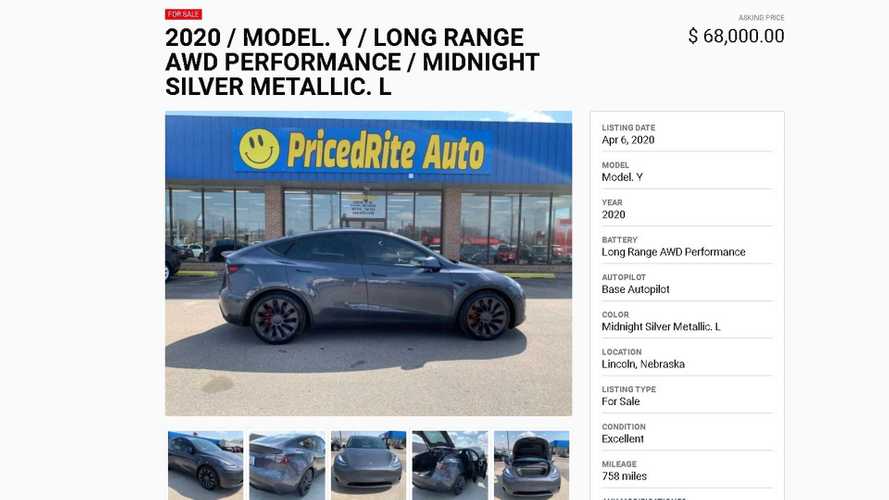 We contacted the dealer and learned that the Model Y is still available and you can have it immediately.

How about a Midnight Silver Metallic Tesla Model Y Performance with just 758 miles. You can probably have it right away depending on where you live. The car is currently in Lincoln, Nebraska.

EDITOR'S UPDATE: We just spoke with the dealership owner on the phone. He verified that the Model Y is, in fact, available and located in Lincoln, Nebraska. He explained that he bought an early reservation holder out of their reservation so he could have a car for sale that no one else had. In the Tesla used sales business, and in the used car business in general, having an exclusive vehicle early in the game is critical. This is especially true of a dealer that focuses specifically on used Teslas.

This Tesla Model Y popped up on onlyusedtesla.com and pricedriteauto.com. You can check out the details by clicking here. The Tesla was just listed for sale on April 6, 2020. It has an asking price of $68,000, which is more than you'd pay for the electric crossover if you bought it new. So, what's the story?

Can You Make Money Trading In Your Tesla Model 3 For A Model Y?

Interestingly, the original purchase agreement says the car was accepted by the customer on February 26. As far as we understand, the first Tesla Model Y wasn't delivered until March 13. Perhaps this is a Tesla employee's car?

Aside from trying to make money and take advantage of the fact that people want to get their hands on a Model Y right away and aren't able to due to Tesla's production freeze, there are other reasons this seller could be moving forward. Many people are facing very hard financial times right now. If you thought you could afford a Model Y on February 26, the story could be very different right now. If the owner is a Tesla employee who was recently laid off, this makes even more sense.

We reached out to the seller to see if we could get more details. If more information becomes available, we'll update this article.

Hat tip to Daniel for the interesting discovery.