Sean Mitchell’s sources said the conversations have taken one year.

Sean Mitchell said in the tweet below he would be willing to bet Tesla would not have a car with prismatic LFP cells, as InsideEVs published on February 19. We’re glad he didn’t since he has confirmed with his own sources that this is going to happen soon, probably by April. Besides confirming what Benchmark Mineral Intelligence told us, Mitchell also added interesting information with the video above. 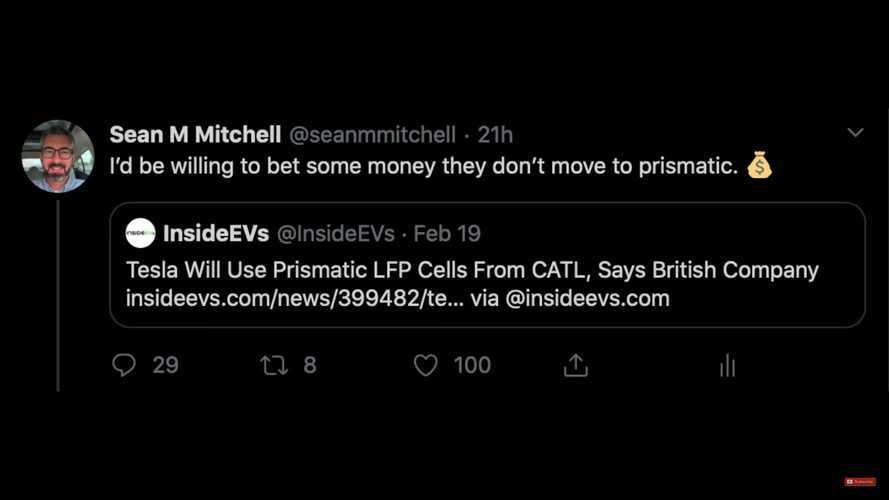 According to the YouTuber, Tesla has been talking to CATL for around a year to adopt the new cell format and chemistry in its entry-level MIC (Made In China) Model 3. The Chinese Standard Range will have a range of more than 155 mi (250 km) in order to be eligible for EV subsidies, will be much cheaper than the current derivatives for sale, and may also last longer, due to the lithium iron phosphate (LFP) chemistry.

As we said in that first article, Tesla did not focus on a cobalt-free battery for environmental concerns. It went for it solely due to value. As you see below, Mitchell works with savings of up to 20 percent, which would make the $13,331 cost only $10,665. In a $30,000 car, that is almost a 10 percent difference saving. But the fact is that Tesla will save even more.

Simon Moores, managing director of Benchmark Mineral Intelligence, speaks of a more than 25 percent economy. If we work with the more conservative number – 25 percent – the battery pack cost drops to $9,998. That is almost the same price Munro & Associates estimate for the 22 kWh BMW i3 battery pack.

We are not even adding to the equation the fact that CATL will use a new method to increase the energy density of the LFP chemistry called cell-to-pack – or CTP. It basically saves weight, allowing the battery pack to offer more energy with the same mass of a less energy-dense solution. Obrist Powertrain has adopted a similar approach with its vacuum fixation technology.

We did not remember this, but in 2016 the Chinese government was offering more incentives precisely for LFP cells. Are these incentives still in place? Would they have played any role in Tesla's decision?

Whatever the answer is, we can’t wait to see what this new entry-level Tesla Model 3 will have to offer. More than that, we would love to see Tesla export it if it is really that good in terms of cost, but this is not very likely. Tesla will probably have a lot of work to meet Chinese demand alone.

Our reader David Martin made an important observation regarding the MIC Tesla Model 3 with prismatic LFP cells:

"Sean talks about a 75 kWh pack and the cost savings. However, the LFP is to go into the SR version, which has only about 55 kWh. That is pretty much how they are squeezing the lower energy density LFP cells in, as the space available is the same as in the LR version. All figures should relate to 55 kWh, not the 75 kWh used."

Martin made a very pertinent observation. And it leads us to the conclusion that the "more than 25 percent" savings may be related to the 55 kWh battery pack, not the 75 kWh. We have no idea how much the smaller pack costs.

Anyway, the 20 kWh more the Long Range offers compared to the 55-kWh Standard Range represents a 26.7 percent advantage if you use the LR pack as the parameter – remember Munro made the price estimate for it, not the 55-kWh pack. That said, it is probably not a stretch to say it may already be at least 25 percent cheaper than the 75-kWh LR.

Martin points to another advantage the MIC Model 3 may have: a longer warranty. Instead of 100,000 miles, the new chemistry could boost the battery cycle life, hence allow Tesla to ensure it will live more than the previous one. That could be another reason – beyond cost – for Tesla to make the change.

Do you have more information or thoughts about this? Please share it with us, as Martin did.