Simon Moores, from Benchmark Mineral Intelligence, has much more interesting things to add to that, such as the LG Chem deal. 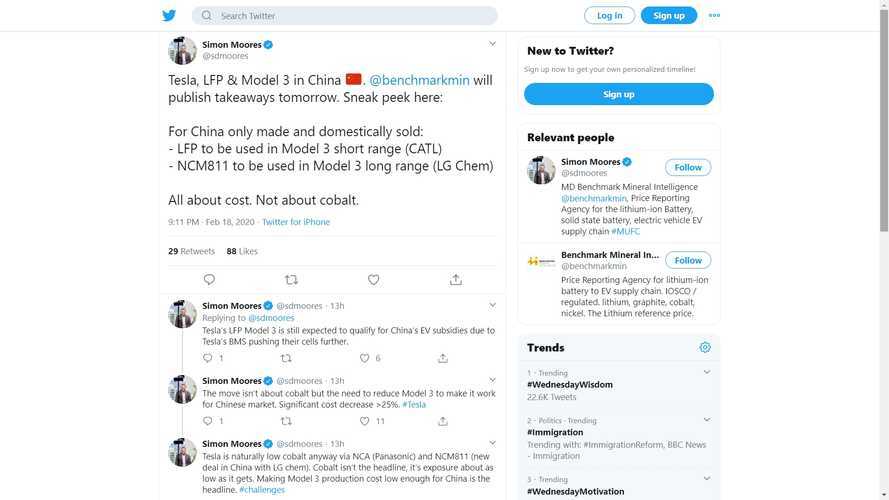 Moores has talked about the Tesla-CATL deal in his Twitter profile. He says that Tesla batteries already have a very low level of cobalt anyway, so that would not be the core of this business decision.

The main goal with the move to prismatic LFP is to allow Tesla to have more than 25 percent saving in production costs, according to Moores. These savings would all be in an entry-level version of the MIC (Made In China) Model 3.

“I can confirm that Tesla expects the Model 3 LFP to achieve subsidy. That means a range of 155 mi or 250 km. Tesla’s efficient drive train takes this further than expected. And the Chinese market is happy with 155 mi.”

Meeting the eligibility criteria for the Chinese EV subsidy is another crucial goal in LFP batteries use. CATL is one of the most relevant battery producers in the country, and its LFP cells for the Model 3 will be tailor-made for the EV, according to Moores.

Currently, a Benchmark Mineral Intelligence report states that the battery cells in a Model 3 represent 27 percent of the total manufacturing cost. That is a lower number than the one Sandy Munro presented at Autoline After Hours, but that is probably because Munro was speaking about EVs in general, not the Model 3 in particular. We’ll try to check that with him.

Benchmark Mineral Intelligence also stated that the LG Chem deal Tesla did was for the company to use NMC 811 cells for the Long Range version of the MIC Model 3, probably only for the biggest EV market in the world, as the prismatic LFP batteries initially will also be.

How much will the entry-level MIC Model 3 cost to produce? Will its BMS be less sophisticated than the one used for the other vehicles? That would allow Tesla to save even more on the car, although Moores believes the cell chemistry is the main advantage these LFP packs will present.

Finally, will Tesla confirm it is going for prismatic LFP cells in China? They have many advantages apart from energy density, such as being more stable and not prone to fires as the lithium-ion chemistries. If that goes ahead and proves to be an adequate solution, we’ll probably see more LFP Tesla vehicles very soon.