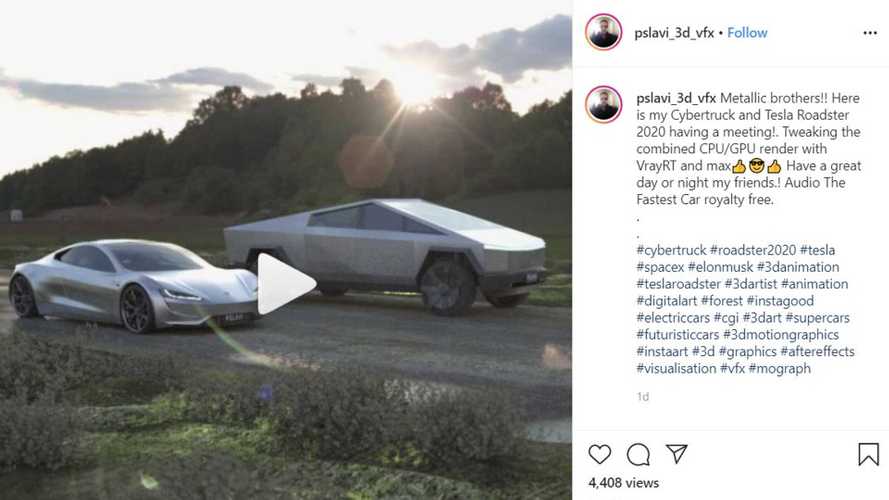 The fake Cybertruck is no match for the faux Roadster.

When the Tesla Cybertruck meets up with the all-new Tesla Roadster in a simulated world, the Roadster blows away the big truck. The same would happen in reality, but we have to wait to see that matchup.

The video, an obvious simulation, comes to us via Instagram with the title "Metallic Brothers." It's the work of Slav Popovski and it's truly quite astonishing. Furthermore, it's entertaining to watch. And last but not least, we have to admit that the Roadster looks striking in this new metallic hue. Here's the caption for the video:

Metallic brothers!! Here is my Cybertruck and Tesla Roadster 2020 having a meeting!. Tweaking the combined CPU/GPU render with VrayRT and max. Have a great day or night my friends.! Audio The Fastest Car royalty-free.

Someday we will see a real-life matchup between the Cybertruck and the new Roadster. Though the truck is mighty quick for its size (the fastest version of the Cybertruck is listed with a 0 to 60 MPH time of less than 2.9 seconds), the Roadster is really in a league of its own in terms of sheer off-the-line performance. The Roadster can hit 60 MPH from a standstill in a blazing 1.9 seconds and there's even real video (see below) from the Roadster reveal event to show its acceleration.

Tesla Cybertruck Pre-Orders May Exceed 500K Based On Tracking
⠀

Unfortunately, a real-world race between these two Teslas is likely a couple of years away still as neither is set to enter production until at least 2021.