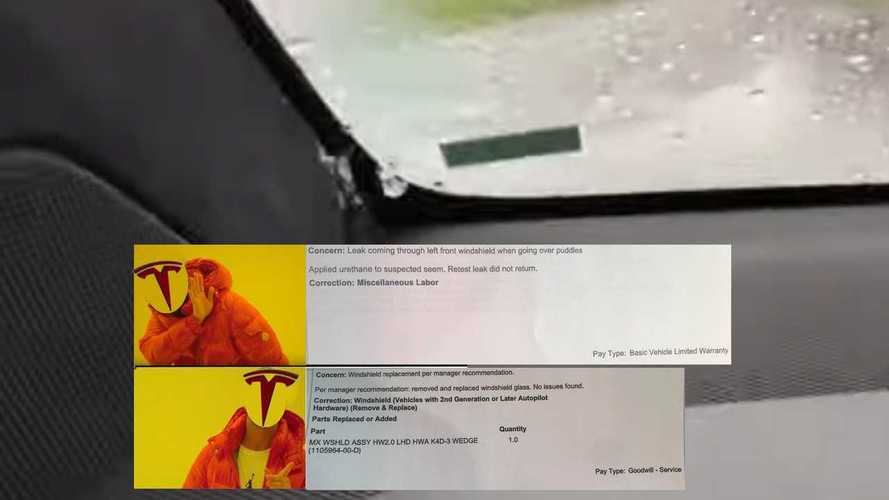 Naming warranty services as goodwill repairs may be a questionable strategy.

The warning came from our reader Sergio Rodriguez. Like Jason Hughes, he turned into news instead of merely reading them. That happened after his Tesla Model X hit a puddle and leaked water on the A-pillar. While trying to get that issue fixed at the Palm Springs Tesla Service Center, he noticed the repair was classified as “Goodwill - Service.” Rodriguez found two possible reasons for that. According to an attorney, Rodriguez is very right about his hypotheses. Both show a strategy that is – at the very least – debatable.

What called Rodriguez’s attention was a sudden change in the way the Tesla Service Center was dealing with his case.

“Initially, when they checked the windshield, it was classified as ‘basic vehicle warranty.’ The final invoice was changed to ‘goodwill.’ I noticed that and spoke to a few other owners.”

Rodriguez clarifies what goodwill is from a legal perspective.

“It is something that is done when there isn’t a warranty or they do it for customer satisfaction. Not warranty defects.”

Weird, right? Why would a warranty repair be named as "goodwill?" This is the first explanation Rodriguez found for that.

“My invoice shows some 'warranty repairs' as 'goodwill repairs,' which don’t count towards the lemon law.”

It is worth remembering Rodriguez has a 2019 Model X 100D, still covered by the manufacturer's warranty. He is facing several problems with his car since June 3, 2019, when he took delivery of it.

You can see the changes Rodriguez mentions in the invoices right below. Have a close look at "pay type."

Rodriguez checked California’s laws to have a better idea of what they establish regarding what he considers to be an electric lemon.

“The state of California requires a lemon vehicle to meet two criteria: the vehicle must have 4 repairs or attempted repairs of a warranty item, and it must be out of service 30 days or more for warranty repairs. Tesla is avoiding buybacks by misclassifying repairs.”

These “goodwill repairs” get even more strange in light of an article EVBite published in April 2019. According to it, Tesla would cut servicing of this kind to save money. Yet, they keep happening. Did the company actually reduce them or turned them into warranty fixes with a different name? Perhaps both.

Tesla All-Weather Kit: The Correction Is Worse Than The Defect
⠀

Besides lemon laws, the other reason for Tesla to do that, according to Rodriguez, would be a lot more alarming.

“Goodwill repairs also remove problematic warranty repair trends from the system, avoiding the need for recalls or flags to the NHTSA.”

Edward C. Chen thinks this is the main reason for these repairs to be classified as goodwill instead of the warranty fixes they truly are. If you do not know the man, he is David Rasmussen’s attorney against Tesla.

Rasmussen is suing the company due to a Model S upgrade that drastically limited his car’s range. He accuses Tesla precisely of trying to conceal the need for a recall on these battery packs by creating software limitations to them.

“I haven’t thought about that from the lemon law perspective.  I think that’s narrowing the scope and not entirely related to lemon law claims. Essentially, the belief is that Tesla masks warranty repairs as goodwill repairs so that they can avoid having to issue technical service bulletins (TSB’s) for these issues.

If they list repairs – for example, the infamous MCU1 eMMC issues – as goodwill rather than calling it a warranty repair, they avoid having to uphold, or rather, keep up with doing those repairs for other customers with similar problems.

The bigger issue that I see is regarding Tesla calling these goodwill repairs instead of warranty repairs. By doing so, they are essentially avoiding having to issue a recall or complete the same repairs for owners fleetwide.”

But what about the possible dodging of the lemon law? That would be the second bird killed with the same stone, according to Chen.

“In terms of lemon laws, one interesting thing that I’ve encountered personally is the way in which owners have been denied lemon law claims/informal dispute resolution under the warranty with regards to the recent batterygate/chargegate issues and case.”

Chen shares another case in which he is working that deals with the same problem.

“I have been formally retained by a different owner who received a completely mind-puzzling decision from an arbitrator that just makes no sense to me. Essentially, the arbitrator found that the software updates did in fact constitute a defect/issue that substantially affected the value/use of the vehicle.

However, he did not grant the lemon law buyback because Tesla ‘had not been given the requisite number of repair attempts’ – in California, it’s 4 times – to fix or correct the issue. The thing is that my client had brought his car in for service more than four times already. As you know, Tesla has not been able to fix the loss of range and the significant increase in supercharging speeds.”

For Chen, this situation is symbolic of what Tesla is achieving by not calling warranty repairs as such.

“Here we have an arbitrator that did find the software updates to be a main factor/cause of the sudden range drop and decreased battery capacity, also finding that this is something that would call for a replacement battery or buyback of the vehicle under the lemon laws, but ultimately deciding not to grant this because Tesla did not have the chance to repair these issues.

This to me is egregious given the fact that Tesla is likely unable to fix these problems. A huge amount of liability here just ticking and waiting to explode.”

For the record, Rodriguez definitely wants Tesla to repurchase his lemon so that he can have a Model X that works as expected. In other words, we are talking about a Tesla fan that only wants a hassle-free vehicle, as any brand-new car should be.

“I feel I got a bad apple. I don’t think all Model Xs are bad. Plus I know the warranty is great.”

Rodriguez is not the only case of strange “goodwill repairs” appearing in bills. Many more customers have reported the same situation, and we are still interviewing them. They are the people Rodrigues talks to in the Facebook posts that illustrate this article. There is also a thread for this matter at the TMC Forum. Perhaps even more than this one.

Some could say this is not something Tesla dictates but rather decisions taken by the Service Centers. The problem is that, unlike other companies, Tesla owns and operates its repair shops.

Besides, if this is a strategy, it only makes sense from the automaker’s perspective. Were Service Centers independent, they would lose money by treating a warranty issue as goodwill. In other words, the decision must come from above.

Considering how serious these allegations are, we have insisted on getting in touch with Tesla. In previous efforts, the company has failed to give us any reply, such as to the MCUv1 logging issue or to a recent Model X accident. In this specific case, Tesla has not replied to our request for comment until now. As usual, we’ll update this article in case the EV manufacturer has something to say about this.

We're also willing to hear what you have to say. Did you have warranty repairs classified as “goodwill” with your brand-new Tesla? Is there anything you would like to add to this story? Feel free to get in touch by any means available to tell us more about this. Your case could be in our next article about this situation.