Tesla All-Weather Kit: The Correction Is Worse Than The Defect

New video shows the free mudflaps may cause more damage than they intend to prevent.

After we published Andrew McMahon’s concerns about the Tesla All-Weather Kit, we left a question to answer with more evidence. It was this one: “Can a fix be worse than the defect it aims to correct?” We can now say for sure it can, as the video above reveals. It was made by MacMahon after he and James Watson, from the Wildcard Automotive Studio, decided to check the mudflaps. The result can be seen above.

We will let McMahon tell you what he found with his own words.

As you can see, McMahon was really disappointed to see how much dirt the mudflaps had collected from January 6 to January 12. In less than a week, it made the car look like if it had been on an off-road trail. He even compares that to a mudflap on a Volvo V60, which you can see below.

Unlike what we believed, Tesla does not offer the installation of the All-Weather Kit for free. It just gives it away. In case you want the company to put them in place, you have to pay for that.

“The left side mudguard has a bigger gap than the one on the right side. I got them for free from Tesla and had to pay 29 bucks to install. The reason why I chose for Tesla to install them was that if anything went wrong with them, it would be Tesla’s responsibility.”

It would not be strange if this price included the cost of the mudflaps. Most owners may prefer the company to install them for the same reasons McMahon gave us. 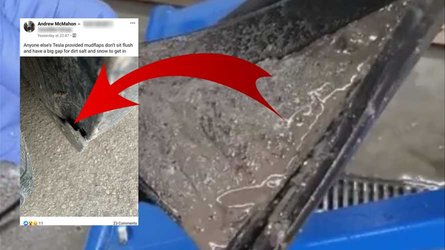 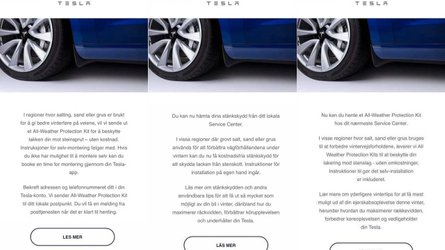 One of the reasons for Tesla’s mudguards not to be so effective is that they use the current bores of the car to fix them. More effective mudflaps require new drillings, which may also pose a risk for rust. McMahon has made a picture comparing the Tesla solution and one with the aftermarket mudguards. On the left, you see the aftermarket solution. On the right, Tesla's.

Besides McMahon’s findings, we have also spoken to Yannick Lachance. He owns Valkyrie PPF Solutions. Chaim Edge kindly got in touch with us and let us know who the author was. Lachance also told us everything he could about Tesla’s solution for paint chipping. He even provided us the original video, unfortunately only in French.

“Thank you for having written the article. I can tell you it was not a joke. I had no bad intentions in doing it. It was only to inform people of what is going on.”

That was not the first Tesla with the All-Weather Kit Lachance dealt with.

“The car belongs to a client that came to my shop for PPF. To do my work, I have to take out the mudguards, and it is always the same thing every time: bolts almost stripped off and mud. None of my clients want me to put it back after seeing that. It is a poisoned present, in my opinion. For those that want mudflaps, we install a different one.”

This issue does not affect only the Tesla-sourced mudflaps.

“I see this in all molded mudguards. This is why we install the rally model. The underskirt also accumulates a lot of dirt.”

We asked Lachance what he thinks is causing this.

“It's just a bad design, it doesn't block the hole in the inside fenders, and this allows for debris to fall straight down in the mudguard. There's a drain hole at the bottom, but it's not big enough to let debris out. It also rubs on the side rocker panel, which damages the paint and will eventually cause rust.”

That is not the only problem with the free All-Weather Kit. If you still want to install it, get the short one.

“If you add the longer version, like in the video, it harms ground clearance – because it is so long – and this makes debris flow at the back end of the rocker. That leads to stone chips.”

“It's sad to see these beautiful cars get damaged by an upgrade part that is meant to fix issues. It will maybe make them worse in the short term. It's a green car, but it doesn't need to have plants growing in it.”

It is worth to remember Tesla decided to give these All-Weather Kits away because there are many cases of Model 3 paint chipping all over the world, especially in countries with cold weather. Not by coincidence, these are the countries in which Tesla is offering the said kits.

Some think this is a problem related to salt on the roads. The problem is that many of these chipping cases happened in cars bought in the summer, soon after being delivered. So there has to be something else causing the issues. Lachance names two reasons.

”The design of the car makes it prone to chipping.”

That is something Guillaume André has already mentioned. The other reason is the same one the Finnish Chamber of Commerce gave a consumer in Finland: the paint is too soft.

“I have been putting paint protection film on cars for 12 years. The paint is so fresh out of the plant and right away in the customer's hands that it's curing time is very short. The paint isn't worse than any other manufacturer’s. The fact that's is still soft when delivered doesn't help. For the paint defects, there's less of them now.”

Lachance talks with quite some experience.

“We do about ten Model 3 units every month. We are a PPF and paint shop but also like to give our Tesla customers the opportunity to have a one-stop-shop with tire change and accessories. We love the EV community and are prone to do only EVs.”

Will Tesla redesign the mudflaps? Will it improve paint curing? Will it offer PPF as a standard item on the lower parts of the Model 3? Those last two solutions would probably be the only effective ways to avoid the chipping some Model 3 owners complain about. Or a new generation of the car, but we suspect it will not happen anytime soon.