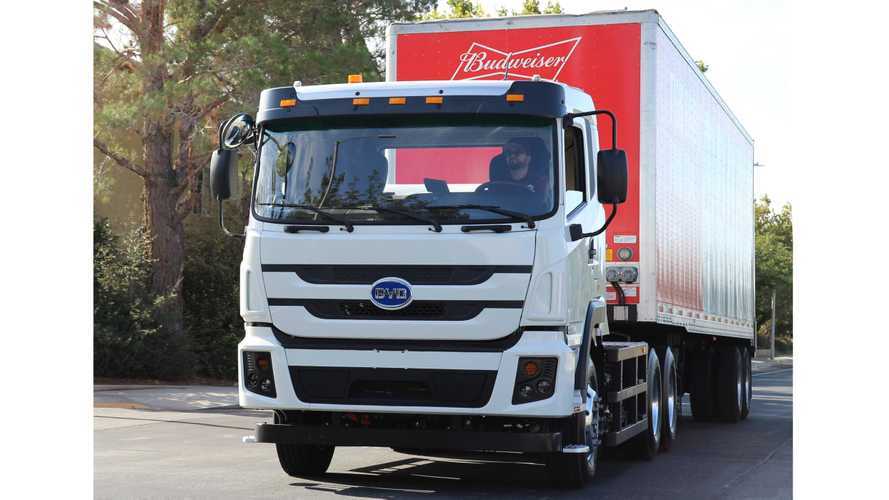 It's just a small foothold, as the company already delivered more than 12,000 globally (mostly in China).

BYD in the U.S. was mostly focused on electric buses, and hundreds of those were already produced in Lancaster, California, but the electric truck branch is also expanding quite nicely.

This month, the Chinese manufacturer announced delivery of its 100th all-electric truck in the country, which happens to be a second-generation BYD 8TT Class 8 electric semi for Anheuser-Busch’s Oakland, CA distribution operations.

"The 100th truck will go to work delivering beverages for Anheuser-Busch around the San Francisco Bay area to retail accounts such as grocery and convenience stores on a daily basis. The trucks will charge at the Anheuser-Busch Oakland facility overnight. The project was grant funded by CARB."

While we appreciate BYD's latest milestone in the U.S., even more amazing is that the company has delivered more than 12,000 electric trucks across all classes - almost all in China, we guess.

Clearly, a long road is ahead for North America and Europe to catch up with China's electric bus/truck sales numbers, but we are cautiously optimistic about the next decade. Especially if Tesla manages to make a splash with the Semi.

"Through its 2025 U.S. Sustainability Goals, Anheuser-Busch has committed to reducing carbon emissions by 25% across its entire value chain by 2025.The Oakland deployment builds on the brewer’s existing partnership with BYD including 21 additional BYD battery electric trucks at four of their distribution facilities across southern California: Sylmar, Riverside, Pomona, and Carson."

"Anheuser-Busch put the BYD 8TT through extensive testing on range, acceleration, gradeability, charging speed, and more. The BYD 8TT exceeds the performance requirements of Anheuser-Busch and is receiving very positive feedback from drivers."

“This is a great milestone for BYD, and it is just the beginning. Our trucks are hard at work every day proving that electric is the new standard. 2020 will be a fantastic year for battery-electric trucks.”

“We are proud to continue to build on our commitment to sustainable logistics through our partnership with BYD in California. By integrating zero-emission vehicles into our distribution fleet, we are taking another step towards reaching our sustainability goals and helping ensure our beers are delivered in the most sustainable way possible.”