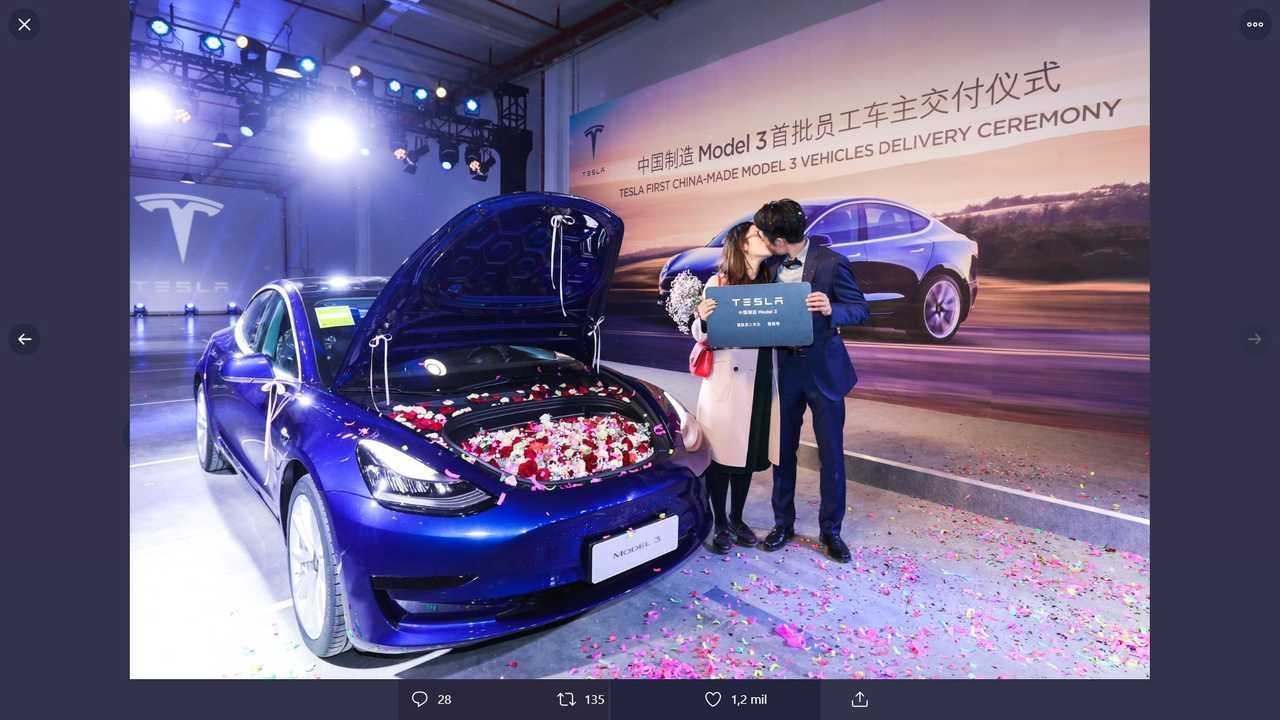 Do you know more about it? Help us tell the whole story here.

Tesla vowed to start delivering the China-made Model 3 units on December 30, and it kept its promise. What the company did not tell us was that among the first 15 units it was going to deliver, we would have a wedding proposal. And the pictures from the Tesla China Twitter profile prove that happened.

The first picture shows a man on his knees with flowers and a microphone in front of his soon to be fiancée. Their Model 3 has a frunk filled up with flowers. Tesla and the fiancé aspirant made a really good combination so that it all happened in the best way possible.

The next picture tells us she accepted his proposal. A kiss beside the Model 3 and a board that Google Translate helped us read as “Tesla Made in China Model 3. The first employee owner, Zeng Gaoming.” Again, we ask our Chinese readers for help in getting that right. Hopefully, Google did a good job.

The last image shows a bunch of people around a Model 3 with boards, aprons, or reflecting jackets. We suspect they are the 15 first owners and part of the Tesla workers inside the impressive Gigafactory 3, where the deliveries took place.

Considering how full the production parking lot already is, and that the factory would be producing 1,000 units per week – if not more, already – these first 15 deliveries are just symbolic. There will probably be many more on December 31 if Chinese buyers have not already started to receive their Model 3 units right after this ceremony.

Anyway, we still want to know more about the marriage proposal. Was the fiancé really an employee called Zeng Gaoming? What is the name of the future bride? How did Tesla arrange this to happen?

It is probably also symbolic – the lady must have said yes a long time ago, only to avoid any embarrassment – but it was a touching moment nonetheless. It was representative not only of a new couple with a cutting-edge EV to raise a family but also of the marriage between Tesla and the most prominent car market in the world. It promises to be a long and happy one.