These Are The States That Love Or Hate The Tesla Cybertruck 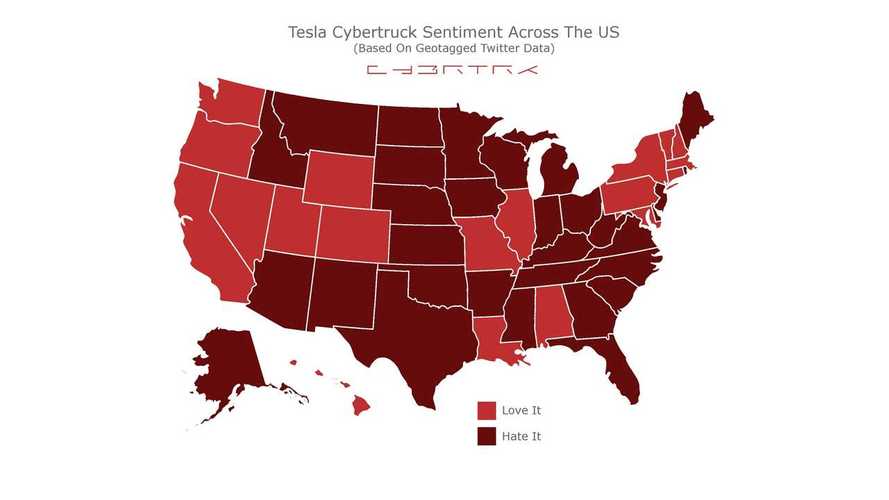 PartCatalog.com used geotagged Twitter data in the 12 hours after the presentation.

When you say something is polarizing, you know the reactions to it are either very good or very bad, with very little room in between for ambiguous feelings. As it relates to the Tesla Cybertruck, we know of people that loved it and of people that hated it. But how’s the balance between those groups? According to a survey PartCatalog.com did with geotagged Twitter data in the 12 hours following the presentation, more states couldn't stand it than those which were eager to buy one.

The company analyzed more than 100,000 geotagged tweets tagged with #cybertruck. According to them, messages such as "I hate it" prevailed in 31 states. The ones that celebrated the pickup truck were a majority in only 19 states.

The West Coast and Northeast states had the most favorable views. Surprisingly, there are traditional truck markets in which it did really well, such as Illinois, Missouri, Lousiana, Alabama, Utah, Wyoming, and Colorado.

California loved it, as well as Nevada, Oregon, and Washington. On the other side of the country, Pennsylvania, Maryland, New York, Connecticut, Massachusetts, Vermont, and New Hampshire. The last one to say it will rock was Hawaii. Did they read our article on why the Cybertruck makes a lot of sense?

Apparently, it does not matter that much for Tesla. There are at least 146,000 people that loved the pickup truck enough to order it, as we already reported. Most of them are going for the dual or tri-motor versions. And that was just a few days after the unveiling.

If you consider that the first deliveries will only happen two years from now, this number could increase dramatically.

When you remember the best-selling pickup truck in the US, the Ford F-150, sold 451,138 units in 2018, you may think the Cybertruck accounts for a little less than one-third of that. But, checking the other pickup trucks, it would already be in fourth place, selling more than the Tacoma immediately. The Toyota pickup truck sold 116,266 units last year.

We are left with doubts about deliveries. How many will the Fremont plant (or Gigafactory 1) be able to produce in its first year, especially with the stressed-skin structure it has? Will its production be as fast as that of a regular truck? It seems meeting demand will be Tesla’s most significant issue.