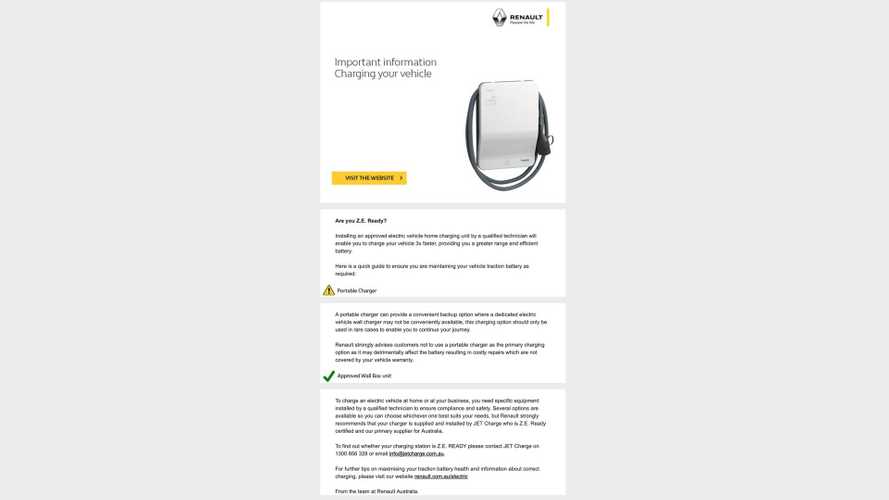 Is it because Renault wants to sell more wallboxes or are portable chargers harmful?

Most of the time, we think it is very advisable to follow manufacturers’ recommendations, but this one from Renault Australia seems very strange. The Australian office sent its customers an email telling them portable chargers are harmful. Should they decide to keep using them, the warranty could be void. But why just Renault Australia?

The message makes it very clear Renault wants ZE vehicle owners to resort solely to the company’s wallbox as a source of electricity, as you can see above. Renault Australia sells the Zoe and the Kangoo ZE. The website Drivezero.com.au published the image and seized the opportunity to challenge Renault on the reasons – which the email makes almost obvious.

By stating that you “need specific equipment installed by a qualified technician” “to charge an electric vehicle at home or your business,” Renault Australia openly implies portable chargers are hazardous. Especially with this sentence:

“Renault strongly advises customers not to use a portable charger as the primary charging option as it may detrimentally affect the battery resulting in costly repairs which are not covered by your vehicle warranty.”

We go even further: if no other EV producer states something similar about portable chargers, the joke’s on Renault. It is probably nothing related to portable chargers – which already come with cars from Tesla or Hyundai – but to the French automaker’s electrical products. If it is a real problem, to start with.

We will contact Renault to see if the company as a whole thinks portable chargers pose a threat to its cars or if this is just something its Australian office came up with to sell more wallboxes. Perhaps Renault should develop a portable charger itself, even if it is sold separately from its EVs.