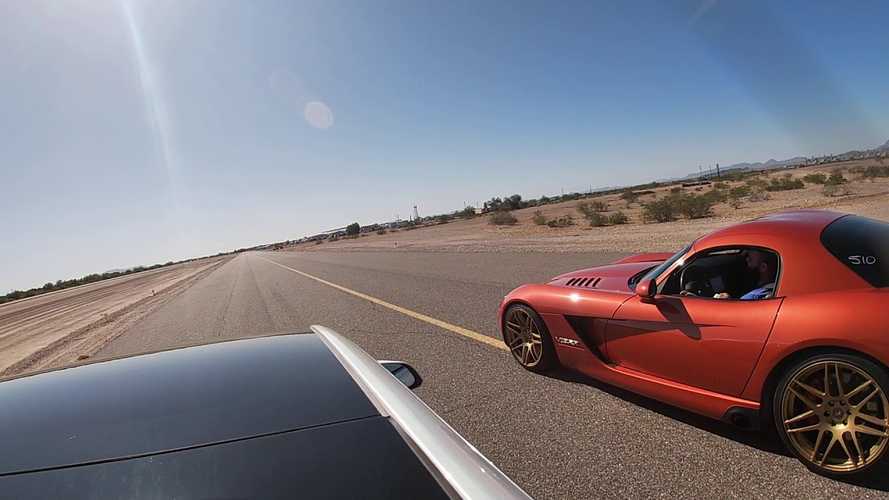 Some of the drag races in the following videos are 1/4 mile and some are 1/2 mile. Regardless, the Tesla Model 3 Performance gives each brave competitor a hell of a tough time. It's clear that after each of these drag races, owners of competing ICE cars gain a newfound respect for Tesla and the (often underestimated) power of electric cars.

According to the Model 3 Performance owner, the year (and mods) of the Mustang in this race are unknown but I really enjoyed how brutally the Tesla Model 3 defeated this gas guzzler. No need for the time slips here!

Tesla Model 3 Performance takes on the 510 hp Dodge Viper in 2 half-mile drag races. Critics who say Tesla can’t sustain speed on longer runs need to see this video — the top speed of a Tesla Model 3 is 162 mph (260 km/h). What is Dodge Viper’s top speed? I'm not sure (or even interested) after watching this 2-0 win by the Tesla.

Another beast from the ICE world, this machine is built for the drag strip. It didn't matter though — one of the most worthy challengers in the arena ate Tesla Model 3 Performance’s dust. In fact, the video description says that the, "Camaro is cammed [with] long tube headers, ram-air intake, and exhaust running on drag radials. It has 473hp at the wheels. Model 3 performance is stock with full interior including floor mats. This is the view from the Camaro."

The Model 3 Performance owner took on the Charger Hellcat in one 1/4 mile and one 1/2 mile race. The results can be seen in the following videos... Hellcat, huh!

A stock Jeep Trackhawk is a 707 hp ICE monster. A while back it even gave Tesla Model X P100D a tough time and just lost to it by only 0.1 seconds in a quarter-mile drag. Although the Trackhawk was too much for the Model 3, the Jeep owner notes, "Actually it was side by side for about 3 seconds (about 60 mph)... Great race." He also praised the Model 3's Performance on the drag strip in another video's comments section, "I love this hobby and love Tesla for showing us the future of this hobby is only going to be even better."

Haven't had enough? Of course you haven't. Be sure to check out the Tesla Model 3 Performance battle against the Dodge Challenger SRT Hellcat on the drag strip.