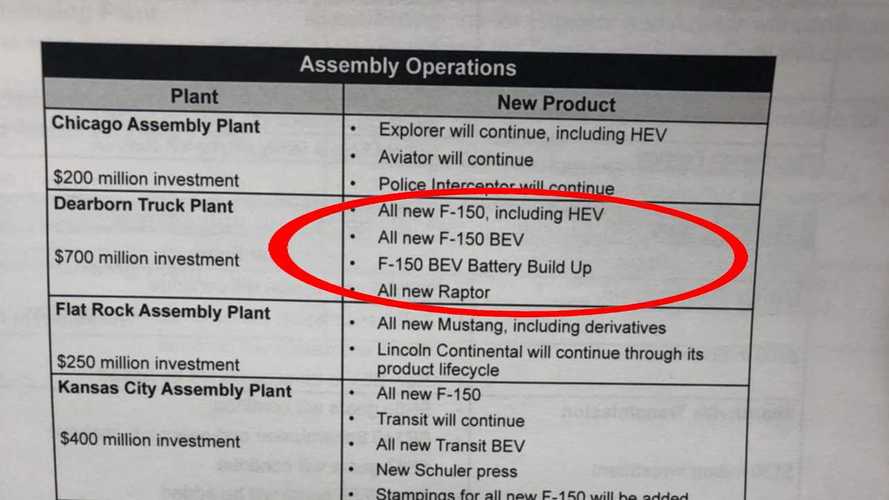 Michael Martinez discovered this welcome indiscretion at the union report of the deal.

GM had to face a strike before it could reach a deal with UAW. To avoid that, Ford was quick in setting a tentative agreement with the union. According to CNBC, it still has to be approved by local UAW leaders and then by the 55,000 UAW members in Ford.

The proposed deal includes $6 billion in investments and the creation of 8,500 new jobs. More than that, the plan also names some of the investments. The Dearborn plant will produce the F-150 BEV, or in simpler terms, the electric F-150. And also the hybrid version of the pickup truck.

The information came from a Michael Martinez tweet, which you can see right below.

The Automotive News journalist reveals that the UAW provided details of the investments the deal proposed. Dearborn will receive $700 million, and it will produce not only the electric and the hybrid versions of the best-selling vehicle in the US. You can read all we know about the electric pickup from Ford right here. The factory will also be in charge of the battery production and of the new Raptor.

EV enthusiasts have more exciting news from UAW’s welcome indiscretion. Louisville will have PHEV versions of the Escape and the Corsair, with a total investment of $100 million. At the Kansas City unit, after an investment of $400 million, a totally-new Transit BEV will be manufactured.

If CNBC is right to report $6 billion in investments, the image presented by Michael Martinez does not reveal all units and products that are included in the deal. If you add up everything, you get a total amount of $4.65 billion. There is still $1.35 billion to appear somewhere else, probably on a page that does not appear in the picture.

We do not see, for example, anything about the Mustang-inspired electric SUV that Autocar says will be named Mach E. Perhaps because the money needed to design and produce it was already invested. Still, Ford will undoubtedly put more money in that vehicle and its future iterations.

Of the revealed investments, the biggest one will happen at the Michigan Assembly plant, which does not have anything of interest for the EV crowd. It will produce a brand-new Ranger and a brand new-Bronco. We’d love to see an electric version of the latter, but the deal breakdown does not name one. Plans change, right?