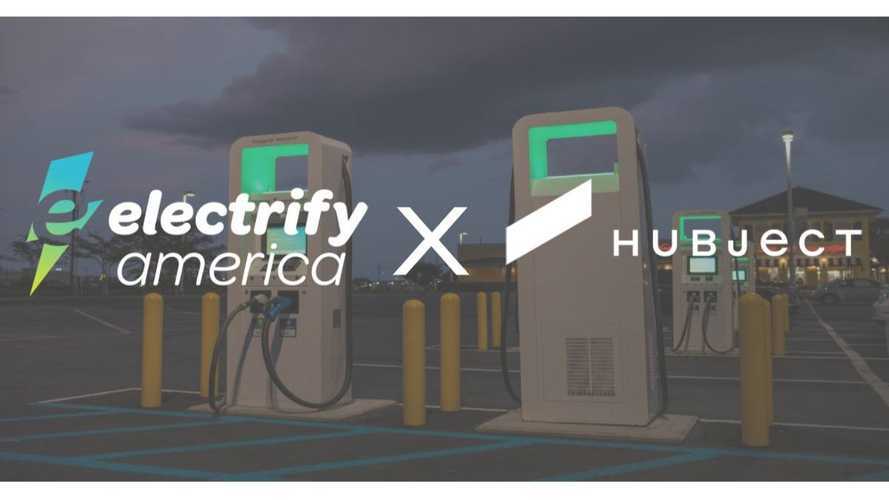 With Plug&Charge, the car itself will become a kind of access card for the charging networks.

Electrify America re-confirmed its intention to offer “Plug&Charge” technology in partnership with Hubject, to streamline the charging process through automation of authentication and billing.

When the new system will be fully operational in 2020, drivers should be able to simply park at the Electrify America charging station, plug-in and charging will begin.

Payment will be processed automatically as the detected car ID will be related to the user account. No more need for an app, an access card or credit card.

"Electrify America and Hubject today announced the next significant step in the upcoming launch of a simplified, and convenient system for electric vehicle charging (EV) called “Plug&Charge.” Drivers will no longer need to reach for a wallet, smartphone or bankcard as the system enables EV drivers to simply plug their vehicle into a charger for the charging session to begin automatically.

By offering the Plug&Charge solution in North America, drivers using Electrify America stations will enjoy faster charging session authentication and authorization. The new system will be fully operational in 2020, when Plug&Charge-compatible EVs are projected to be available to customers."

Tesla has developed an automatic system for its Supercharging network (which was easy when a single company sells cars and operates the charging network. The general charging providers in North America need yet to launch a similar feature.

Ford To Partner With Electrify America On Ultra-Fast Charging

The Plug&Charge is based on the ISO 15118 standard:

"The system, operated by Hubject, is a key component in implementing “Plug&Charge” technology and using the ISO 15118 standard across Electrify America’s network. The companies took the system live this month for the North American market through a signing procedure at U.S. Bank in Santa Monica, CA,

ISO 15118 is an international standard that outlines the secured communication protocol that an electric vehicle and charging station should use to recharge the EV’s battery. It enables the simplified charging functionality for the most prevalent EV charging connector type, called the Combined Charging System (CCS)."

"This is a significant step toward making public charging easier for EV drivers by increasing the number of end-to-end services handled by the new North America based ecosystem. The system uses the processes and procedures developed in tandem with security experts around the world to enable encrypted, convenient and fast Plug&Charge functionalities across North America. Hubject’s North American based V2G Root and Certificate Authority is the first of its kind and the second system globally, based on Hubject’s already established European system. It will enable encrypted communication for a seamless customer charging experience in North America.

“The Plug&Charge technology will streamline Electrify America's charging experience. We work every day to offer current and future EV owners advanced technologies in charging to help make electric vehicle ownership a reality for both their local and long-distance mobility needs."

“Using ISO 15118 as the basis of charging technology innovation also enables many more future-proof features such as smart charging and bi-directional charging. These energy management features will be necessary as the number of EVs on the road will be growing faster than the ability to increase energy production in the coming years. Adding a North American based V2G Root for Plug&Charge helps us to securely service our clients on a global basis.”