Tesla Club President Is An Aspiring Musician Singing About Tesla 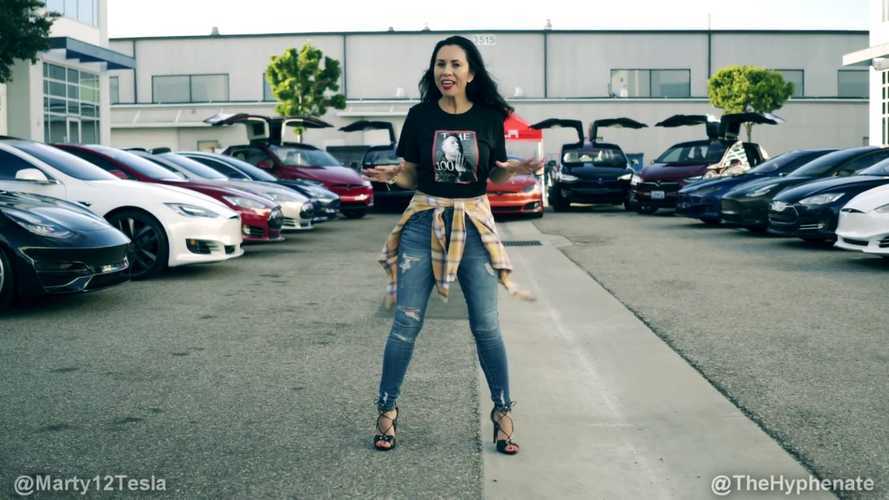 Whatever it takes to promote the brand you love.

Marty Morrise is the dynamic Founder and President of Tesla Club-SoCal. The club was founded in 2018 and has already amassed more than 500 members. As the Southern California club continues to expand, Marty is focusing on ways to bring the Tesla community together. One way she does that is through her passion for music.

Check Out This Impressive Safety Advertisement For Tesla

Above: Marty with her Tesla Model X P100D (Photo courtesy of Marty Morisse)

It turns out Marty likes to write music in her spare time, so she decided to write a song about Tesla. Club members volunteered their Teslas to play a starring role in her latest music video. Recently, I spoke with Marty to learn more about it.

"I love writing music and continue to write for other artists as a hobby. One day I decided to combine both of my passions, Tesla and Music... and did a music video featuring, 'The Hyphenate.' I invited some of the Tesla Club-SoCal members to participate and it was shot in Hawthorne in the SpaceX parking lot. We broke a world record for the most Teslas in a music video," Marty explains.

Above: Marty performs her song, Let's Ride, along with 'The Hyphenate' and a fleet of Teslas that belong to club members (YouTube: Tesla Club SoCal)

"I’ve been a professional singer/songwriter since 2000 and was also in a funk/pop band performing in many different clubs all over Los Angeles and Orange County; Whiskey a Go Go, House of Blues and Josh Slocum’s (Dennis Rodman’s Newport Beach Club) just to name a few," explains Marty.

I asked Marty how she got turned on to Tesla. She recalls, "I became a fan in 2012 when I saw a Tesla Model S on the freeway. The first thing that caught my eye was the classic look and the timeless design." Later, "after test driving the Model S in 2015, I was hooked! I bought the 2015 Model S 70D... Got my husband on board and he also became a fan and we decided to sell it after a few years to get a Model X P100D and the Model 3 Performance."

Above: Members of Tesla Club-SoCal (Photo courtesy of Marty Morisse)

Marty says, "Not only will you love that this car is helping the environment and is the safest car on the road, but you will fall in love with the Tesla community! That’s what inspired me to start a club. This has been such an incredible journey... Tesla owners love sharing their fun adventures with other owners and cool experiences with new owners, all while making new friends."

If you're interested in being a member of Marty's Tesla club in Southern California, you can sign up by going to: Tesla Vibez.