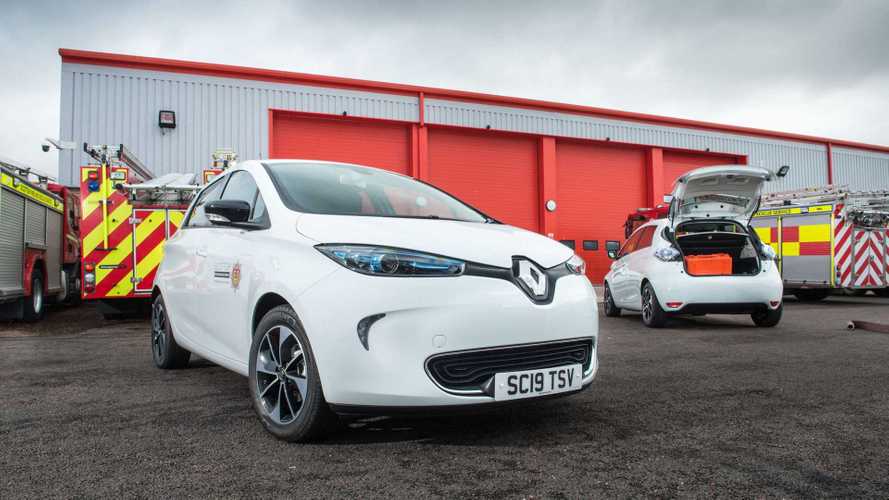 ZOE, of course, is not a fire truck, but according to SFRS, it will be used by uniformed staff, office employees and management to interact with the public in non-emergency situations, which span free home safety visits to community events across the whole of Scotland (including Orkney and the Shetland Islands).

"SFRS, the world’s fourth largest fire and rescue service, will use the zero-emissions-in-use Renault ZOEs as general pool vehicles, with each covering at least 10,000 miles a year."

The next step will be to replace the entire ICE pool car fleet with electric cars (probably also ZOE). Moreover, SFRS is evaluating also the Renault Kangoo Z.E. for van fleet.

"Significantly, the new ZOEs are SFRS’s first pure electric vehicles and represent the beginning of a significant shift in how it will evolve its fleet of nearly 1,800 vehicles. The Renault ZOE proves that electric vehicles are now a viable business proposition, combined with the Scottish Government’s sizeable investment in charging infrastructure, SFRS is committed to moving to an entirely electric fleet.

The Renault ZOEs replace traditionally fueled hatchbacks and now account for nearly a quarter of SFRS’s pool car fleet. They will be based at strategic station locations throughout the country, with SFRS installing up to six charging points at each site. Aided by the Renault ZOE’s flexible charging options, additional charging will also be carried out via ChargePlace Scotland – the country’s government-supported public EV charging network.

SFRS chose the Renault ZOE due to its ‘real-world’ range of 186 miles, comprehensive standard specification, ease-of-use and value all contributing to the organisation’s decision."

“The best way to deal with an emergency is to prevent it from happening, and the ZOEs will play a vital role in how we engage with communities and deliver our crucial safety messages. The Renault ZOE’s range and the vastly improved charging infrastructure means we have been able to spread them far and wide, and there’s not a nook or cranny of Scotland that one of our ZOEs isn’t able to cover.

“Introducing them has been a major step in our future direction and while we have previously adopted hybrid technology with a handful of vehicles, they felt more like a box ticking exercise and never really worked on a practical or financial basis. With the ZOE, we can see that having environmentally-compatible electric vehicles is a viable business model, allowing us to reduce our carbon footprint, preserve the country we are so passionate about and provide our team with a vehicle that is perfect for their requirements.”

“What’s more, the ZOE’s ease-of-use means that everyone has adapted to them very well. We did have a handout card to give to drivers and delivered a little training, but with most people already having experience of driving an automatic the transition from our previous pool cars has been very straightforward. It’s worked so well that we’ll be replacing all our pool cars with the Renault ZOE in due course, plus we are also evaluating the Renault Kangoo Z.E. with a view to introducing it to our compact van fleet.”

Gallery: Renault ZOE comes to the aid of the Scottish Fire and Rescue Service