Now we wait to see it broken yet again.

A Tesla Model S P100D has just set a new world record in the quarter-mile drag race. Watch video of the record-setter here.

The Model S moves like lightning down the quarter-mile strip. It's so fast that few other cars, not even some extremely expensive hypercars, can match it in the 1/4-mile. 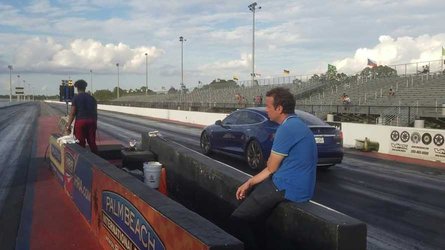 Though we've long known the Model S to be fast down the strip, now it's even faster. That bar has been raised just a bit more. The new 1/4-mile world record time for the Model S stands at 10.41 seconds at 125 MPH. That's just a few ticks better than the old record time of 10.44, but it's enough to move the time to beat downwards a bit more.

Grab a look at the video to see the electric Tesla sedan set a new record.