Oops!... Artega Did It Again: It Showed A Microlino As the Karo 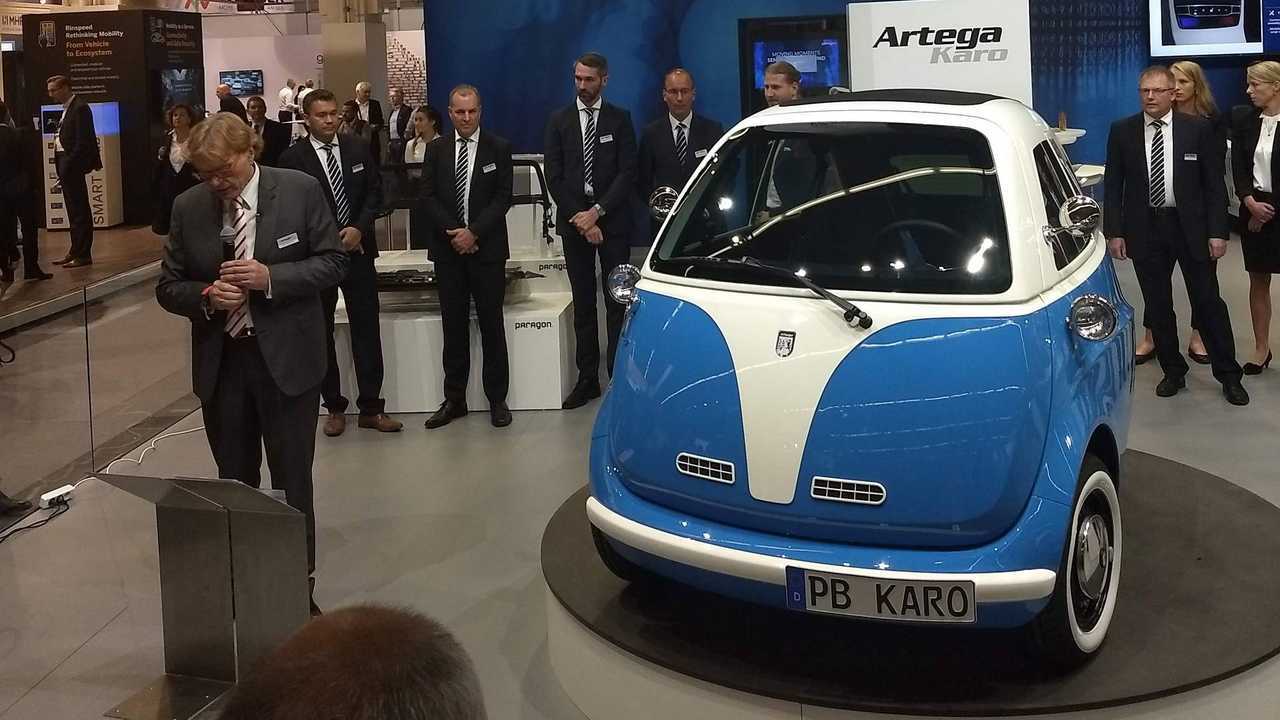 Our automotive soap opera has a new and dramatic act. After we published the German court decision against Artega, we were sure our next article would be about who would produce the Microlino and when. But the reality is definitely stranger than fiction.

If you are not aware of the whole story, Micro-Mobility – a Swiss company that produces scooters – decided in 2015 it would build a bubble car.

Without the means to do it all by itself, it made a partnership with an Italian company named TMI, from the Tazzari group, which would produce the L7e vehicle. But it got sold last November to Artega, a car company from the German group Paragon.

Artega immediately registered a website with the name Karolino in Switzerland, and it was willing to sell the Microlino under its badge. Micro-Mobility did not agree with that decision and sued Artega. On August 22, Artega was charged with not showing their version of the Microlino. If the company didn't comply, it would have to pay a 250,000 euro fine or to have its manager, Klaus Dieter Frers, arrested.

Artega was very confident the decision would be in its favor. Despite a contract clause that expressly forbids TMI or any of its affiliates to have a competing product. When it lost, it took the Microlino pictures out of its website.

It all seemed settled until September 10, when the company made its Frankfurt Motor Show press conference. With a very round car under wraps. Klaus Dieter Frers himself unveiled it. Named Karo instead of Karolino, it was a Microlino with nostalgic elements. Oops!… Artega did it again.

The dramatic note was that, besides this author and a lot of other journalists, Merlin and Oliver Ouboter were right in front of Frers. The two brothers and their father, Wim, are the people in charge of Micro-Mobility and therefore of the Microlino.

I have spoken to them before the unveiling, and they were certain Frers would infringe the German court ruling. They were just curious about how he would say he didn’t. Compare the vehicles below:

If you want to hear our bet, Frers will likely claim his car is more nostalgic. With different headlights, for example – but all technical specs are exactly the same. Width, track, height, wheelbase, probably even weight. The windshield is the same, as are the sliding windows.

“I really do not know what is there for him with this attitude. How many vehicles does he expect to sell? We initially aimed to produce 10,000 units a year. He could perfectly develop his own bubble car,” said Oliver Ouboter.

“On our part, we just want to find a solution very soon. Frers can even compete with us. Artega has not delivered a new vehicle ever since he bought it back. The problem is using our own project against us. Legal decisions take a lot of time, and we do not want to waste any more of it. We just want to put the Microlino on the market.”

Check this video we have done with Oliver Ouboter at the Frankfurt Motor Show – sorry for the problems it presents. It is on our Facebook page:

To sell the Microlino, Micro-Mobility has to find a new production partner and to end the contract it still has with TMI. It hopes to do so with a settlement, but the Ouboter brothers are not very confident that will work.

Our main doubt now relates to how the German court will react with what Artega did. The Ouboter brothers sent pictures of it to their lawyers as soon as the veil was taken off. That may be crucial for the future of the small bubble electric quadricycle. We mean the Microlino, in case you're in doubt.

Gallery: Oops!... Artega Did It Again: It Showed A Microlino As the Karo