Artega Is Forbidden To Show Karolino At The Frankfurt Motor Show 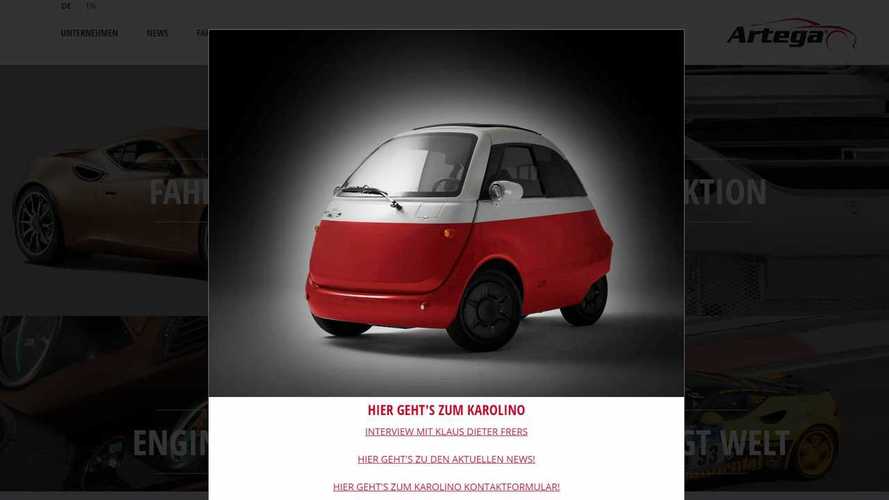 The unwanted twin of the Micro-Mobility Microlino will probably never be born.

InsideEVs has been following very closely the drama involving the Micro-Mobility Microlino. First, we found it would cost €12,000. But then discovered problems involving the quadricycle production that could be compared to a soap opera. The latest act was a German court that ruled Artega will not be allowed to show the Karolino.

Before you start asking questions, we will help you understand the plot piece by piece. In 2015, Micro-Mobility decided to produce an electric quadricycle. Classified as an L7e, it will be a vehicle with an urban mission, since it is not allowed on highways.

Believe Us: This Is Not The Microlino, It Is The Karolino
⠀

Check Out The Prices And Available Options For The Microlino

What made waves on the international motoring press is that the Microlino pays a tribute to the BMW Isetta. Including the single door at the front end. Microlino made an arrangement with an Italian EV producer called Tazzari and they would be in charge of manufacturing it through TMI, one of the companies of the Tazzari group.

Last November 2018, a German company called Artega announced it bought TMI. At the same time, it registered the website Karolino.ch in Switzerland. We recently discovered what the Karolino is: the Microlino with a different badge.

Run by Klaus Dieter Frers, Artega announced the intention to sell the Karolino and to expose it at the 2019 Frankfurt Motor Show, something Micro-Mobility viewed as a direct threat to their project. So the Ouboter family, who runs Micro-Mobility, filed two lawsuits against Artega.

The first one would be a sort of injunction to prevent Artega from showing the Microlino as the Karolino. The second one seeks compensation on damages caused by alleged breaches of the contract between Micro-Mobility and TMI, now run by Artega.

According to Merlin Ouboter, CMO at Micro-Mobility, the OLG (Oberlandesgericht) München, or Munich Provincial Appellate Court, has decided last August 22 on the process 29 W 866/19 that Artega and Frers are forbidden to present the rebadged Microlino as the Karolino.

“We have won on all points, which means that he cannot exhibit the Karolino at the IAA – the Frankfurt Motor Show – or advertise it on his website,” said Ouboter.

We have visited the Artega's website and it still presents the Karolino. That's because the decision will only be published on Monday, which will make it immediate enforceable.

In our article about the Karolino, we remembered the company was not new to legal issues. In 2009, Klaus Dieter Frers was ousted of the company by his partner, Wolfgang Ziebarth, and Tresalia Capital, a Mexican enterprise. Bought back by Frers, it announced an electric version of the Artega GT, called Scalo, in 2015 and the Scalo Superelletra in 2017. None of these vehicles has been put for sale so far.

Klaus Dieter Frers has got in touch with us on August 15. He disputed what our sources told us about the Artega GT deliveries and claimed to have documents that prove he has delivered 43 units of the car before “Tresalia was successful with an unfriendly take-over”.

He also said Artega published in 2017 the Scalo would not be produced and that the company will present a revised Superelletra in Frankfurt with an 800V technology that “ is on a par with OEMs like Porsche”.

Finally, Frers told us this: “In Germany, we don’t influence a running legal procedure by press releases. This is the reason why we didn’t publish any statement so far.” And also this: “In 10 days or so, the truth of the case will come through and then you and others will realize the hard facts and not our ‘version of the facts.’”

We have immediately asked him for copies of the documents regarding the Artega GT’s production. We also asked him for the press release that stated the Scalo would not be produced in 2015. We’ll publish them as soon as he sends them to us.

For the record, the Scalo still appears on Artega’s website as one of the company’s cars that mark the company’s return “as a manufacturer”. Under the “Vehicles” menu.

Eight days after Frers’ contact, we are still not sure about the truth of the case, but we know from the Ouboters that a German court in Munich has forbidden Artega from presenting the Karolino. We are always available to hear from Artega and to publish the answers to the questions we forwarded to it.

Gallery: Check The Prices And Available Options For The Microlino