Scraping By: How I Got My Tesla Model 3 Front Bumper Fixed 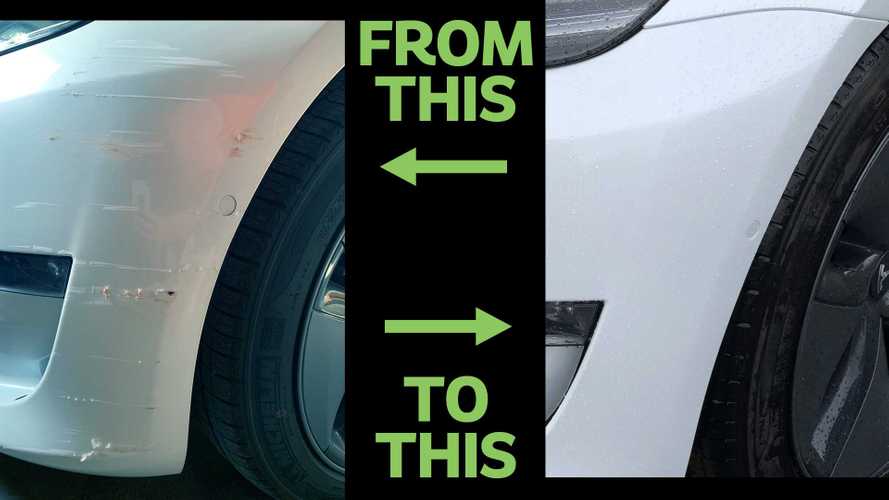 Is it really a pain to get paint damage on a Model 3 fixed?

Not a month after we got our Tesla Model 3, my wife and I were faced with a serious problem. The driver-side corner of the car’s front bumper had made intimate contact with our brick garage. My heart was broken; our shiny new toy wasn’t new anymore.

The damage was visible and deep. The brick scraped the bumper and tore through the protective wrap we had installed on the front end. It penetrated the white paint and revealed the bare, dark substrate beneath. It looked like a giant tiger had swiped at my Model 3 with its deadly claw.

What could we do but start the repair process?

Hearing about this, along with the flurry of Tesla paint problems and the long line of Model 3 repair issues, my fellow editors at InsideEVs had a flurry of questions. How much does it cost to fix? Where are you getting it fixed? Did the paint just fall off?

Below are their best questions, and my best answers, so you’ll know what it’s like when your Model 3’s innocence is taken away.

Is it hard to find a Tesla-approved body shop?

It wasn’t for me. At first I thought Tesla would be able to repair the scrapes on my Model 3’s front bumper at their own service center. We called and ask, and they told us they don’t do body repair there because they’re so busy, but they recommended two body shops near me that were certified by Tesla.

We chose the closest one to us, Gerber Collission & Glass in Berea, Ohio.

How does a repair facility become Tesla-certified?

The person we spoke with at Gerber told us there are two ways a body shop can become certified by Tesla to repair its vehicles. The first is by taking an online course, and the second involves actually flying to the factory in Fremont to learn about repairing Tesla vehicles first hand.

In this case, Gerber was certified the second, more thorough way, so we felt comfortable having them repair the scrapes and paint damage on the front bumper of our Model 3.

Did your insurance company immediately ok repairs through this Tesla-approved shop?

Yes. Gerber actually spoke with our insurance company directly and explained why the cost of the repair was what it was. We had had our Model 3’s front end wrapped, so there were some extra labor costs in removing that so the repairs could be done.

The insurance company, though, did not complain, put up a fight, or approve our claim for less than the estimate. We, of course, had to pay our deductible, which is $500, but beyond that, the insurance company paid for the bumper repair and a rental vehicle for my wife to drive while the Model 3 was in the shop.

The consequence of reporting the claim is that our insurance premium will go up, but our insurance company, State Farm, already told us it would only increase about $140 annually, which we thought was reasonable.

How much did it cost to fix?

Since your Model 3 was previously wrapped, what’s involved in unwrapping, repairing and re-wrapping the car? Any additional costs or concerns?

One big headache is that we have to wait 60 days after the bumper was repaired to get it wrapped again. That means there are 60 days where the front bumper is left exposed to get chipped by rocks, which is the reason we got it wrapped in the first place.

We will be getting it wrapped again, though, and are waiting to find out if our insurance will cover this cost, as well.

How long did the repair process take?

It took less than two days for Gerber to repair our front bumper, though we did wait a couple weeks for our appointment. Once the car was in their hands, though, the repair happened very quickly.

In our case, the repair required first moving the wrap that had been installed on the front bumper. Then, Gerber removed the entire bumper from the car, which required carefully removing the sensors that are embedded in that piece of the body. With the bumper off, they repaired the areas that were scraped deeply and then repainted the area that was damaged. They did not repaint the whole bumper, but rather feathered in the new paint with the established color of the old paint. Then they reapplied clearcoat, let it dry, and reassembled.

Amazing. I inspected the entire bumper when we picked it up from the repair shop and the paint looked completely uniform; I could not tell where the repair had been made nor where the new and old paint met.

Are there any unique concerns to repairing this type of damage on a Tesla Model 3?

Since we purchased the Full Self Driving feature for the Model 3, I was concerned any work around the car’s sensors could affect the performance of that feature. That’s why I was pleased to know the repair show we chose was certified and knew how to remove the sensors and reinstall them after the work was completed.

If any old body shop had performed the repair, they might have left the bumper on, taped around the sensors, and fixed the scrapes that way. The sensors could’ve been damaged that way or else got paint on them. I didn’t worry about that, though, with a certified repair shop doing the work.

Have you noticed any paint problems with your car, such as parts with exposed primer or even with chippings, especially behind the wheels?

I’ve noticed no exposed primer and no chipping anywhere on my Model 3. The only paint defect is a small area on the edge of the front passenger door where a small area of paint is missing. Fortunately, the repair shopped that fixed the bumper also touched up this area for us for free.

Do you believe wrapping really helped preserve the paint or was it just a hassle when having a new paint job?

The repair shop told us directly, without prompting, that the wrap significantly lessened the amount of damage that happened to the bumper when it scraped against the brick wall of our garage.

Yes, the repair did cost extra because the wrap had to be removed, and then there’ll be the added cost of having the wrap reapplied (hopefully covered by insurance, as well), so perhaps the presence of the wrap was awash in the end.

Even still, I’d get the wrap again because it’s meant to prevent rock chips, not stop paint damage from scraping the car against a brick wall. In terms of preventing rock chips, it’s done its job in the first two months we’ve owned the car. Plus, the ceramic coating we got on top of the wrap has made cleaning the car shockingly easy. Bird poop, dirt, grime, and the like just slide off the car when it rains or when we clean it with a wet towel.