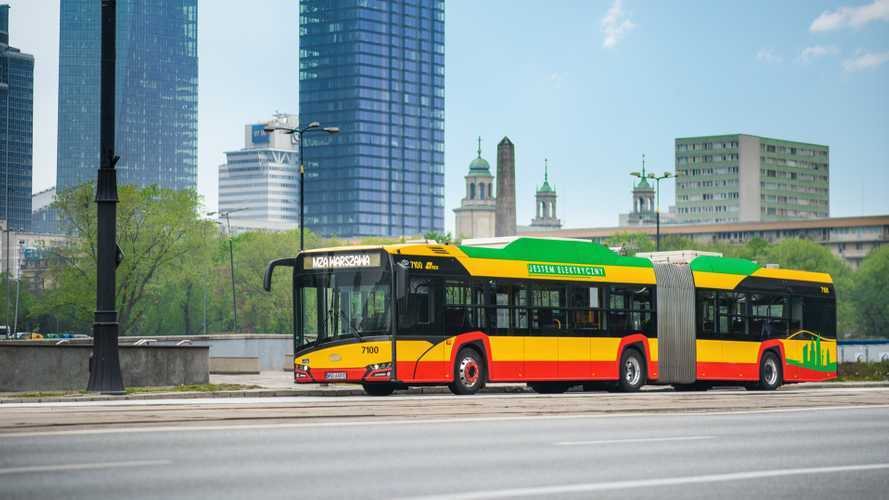 Within less than a month, Solaris received three volume orders for hundreds of electric buses.

The total value of 130 Solaris Urbino 18 electric for Warsaw operator Miejskie Zakłady Autobusowe (MZA) is nearly PLN 400 million (€94 million/$105 million). All those buses will be delivered by the end of 2020, which is also pretty quick.

"The gigantic order for 130 articulated electric buses is the biggest ever tender of its kind in Europe. The electric buses of Solaris have been ordered so far by 60 cities in 17 countries, and have already traversed over 14 million kilometres since 2011. Pursuant to the contract signed today, the company is to carry out the order in 2020."

MZA plans to have 400 electric buses on the road within two years from now, which means more contracts are coming.

During the past few weeks, Solaris received also an order for 90 Urbino 12 electric from Berlin and 40 Solaris Urbino 12 Electric from Milan (with an option for up to 250).

According to the press release, the uses will be equipped with 150 kWh battery packs (short range/high charging capability at up to 400 kW) to use on routes equipped with ultra-fast charging stations.

"The 130 articulated electric Urbinos for MZA will be fitted with Solaris High Power batteries with a capacity of 150 kWh, and for which the producer grants a seven-year warranty, as per requirement of the awarding authority. The electric power in those batteries will be recharged by means of depot charging stations of the plug-in type and by means of pantographs. The bus will feature two charging sockets: one above the right wheel arch and the other placed behind the last door, whereas the pantograph will be mounted on the roof. Boasting over 400 kW of power, the fast-charging stations will be deployed in various corners of the city. The setup of the infrastructure is the object of a separate call for tender.

The drive unit of the electric articulated buses for Warsaw will consist of an axle with two electric engines of 110 kW each. Even though electric buses are already much cheaper to operate than diesel ones, the vehicles for operator MZA are getting also a voltage converter for the traction motor, produced in SiC technology, which will help to additionally reduce energy consumption.

The interior and furnishing of the bus is well-known to MZA passengers and complies with the binding standards of the public transport authority ZTM. The driver’s cabin will be completely shut off; the bus will be air-conditioned and will feature a comprehensive passenger information system. Furthermore, three double USB charging ports will be available to passengers, allowing for the recharging of mobile devices during the bus ride.

Apart from all the technical novelties, the prime feature of the electric buses is that they do not release any exhaust emissions in the place of service, and that they are low noise, which contributes considerably to the improvement of life quality in the city."

"Solaris takes huge pride in winning such a large tender for the delivery of electric buses. We have been consistently pursuing our strategy, grounded in the development of zero-emission vehicles, for many years now. Thanks to the huge order of MZA we are able to solidify our position as European leader of electromobility. However, what makes us glad above all else is that our company, which pays great attention to the development of sustainable transport, contributes to the improvement of the life comfort of the residents of Warsaw."

"Our project to purchase 130 electric articulated buses, supported by European funds, is one of the largest e-mobility investments in Europe. We are glad that we are one of the leaders in the implementation of environmentally friendly solutions for transport, according to our plans, in two years' time, we will have a fleet of nearly 400 zero and low-emission buses. MZA ecological buses are a sign of hope for clean air in the capital."